You'll notice I've been featuring a lot of ethnic stores lately. Expect that to continue! I've noticed the smaller, ethnic, and urban stores are significantly underrepresented in online supermarket blogging and coverage.

This particular store, in Hyattsville, MD, a Washington, DC suburb, has gotten attention because it is a former Giant-MD store with the majority of its decor intact. It's also a pretty great ethnic supermarket.

One interesting thing to take into account before touring the store is the demographics of Washington, DC as compared to those of its suburbs. Generally speaking, in the New York City area, the urban areas are the more ethnically diverse and lower-income, while the suburbs are higher-income and less diverse. The exact opposite is true in Washington, DC, meaning that the city stores are primarily extremely boring Safeways, Giants, and Whole Foods. The immediate suburbs, however, have much more interesting and diverse supermarket options. 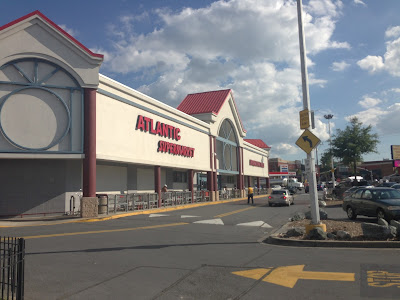 As a Giant, this store had gates around the entire front walkway area to keep the carts in that part and prevent them from being taken into the parking lot. Atlantic has cut out the gates in certain parts to allow carts to be taken into the lot. As is expected, the selection of carts is rather random here, although the majority are actually real Atlantic Supermarket carts.

You enter to the far right in the picture above. Immediately you make a right turn to enter the large produce department. 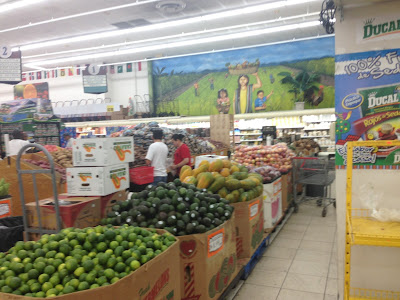 The produce runs along the front wall and part of the right-side wall, with additional cases and displays in the middle. This store seems to focus heavily on quantity . . . 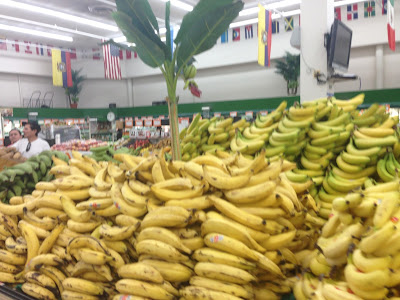 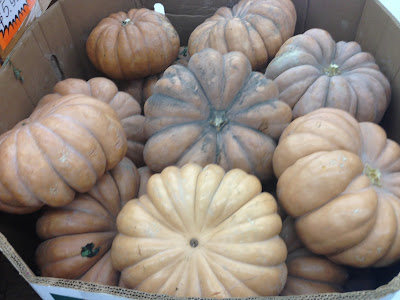 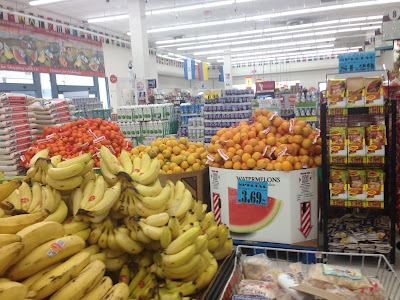 The above photo shows the entrance (far left) looking along the front end (just past the big displays). In the middle (near the post) I believe there is a counter selling maybe electronics. There is more general merchandise along the front-end and in the far corner. 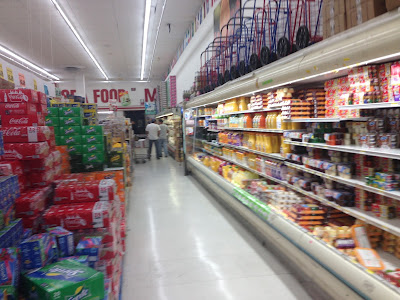 The first aisle is dairy with items on sale on the left and in the center. We are looking towards the back of the store in the above photo. 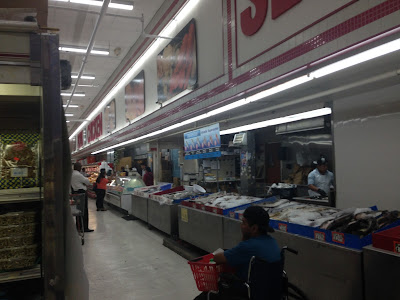 The remaining fresh departments are along the back wall. If I remember correctly, they go: seafood, hot food, packaged meat, meat service, and then an area where Giant would have had a deli (Atlantic does not have a deli). 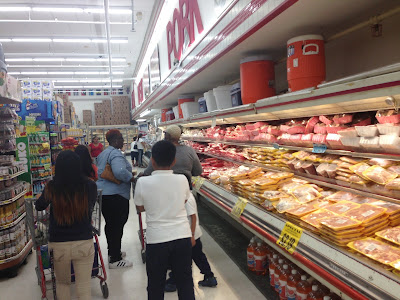 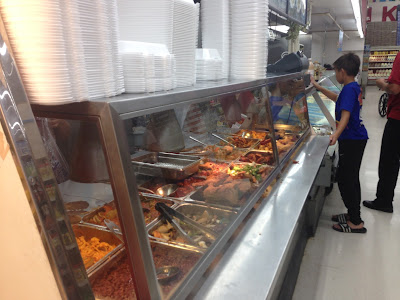 There was a very nice hot food department, featuring both Latin American and Asian foods, reflecting the area's population. 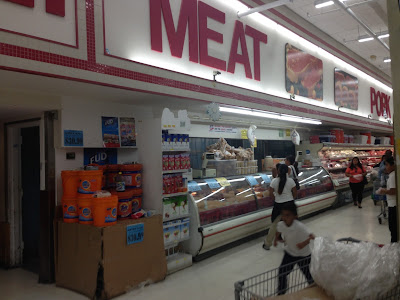 Giant's deli would have been to the left above. 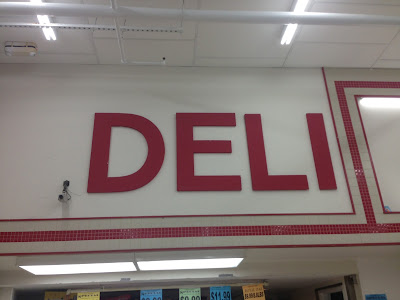 The sign remains, but the area was filled with random merchandise on sale. 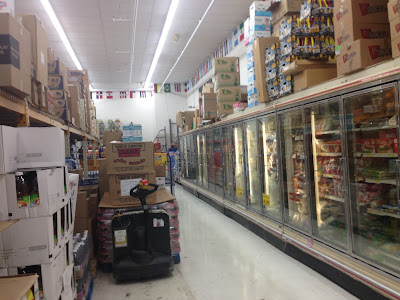 The last aisle has frozen foods on one side. We're looking towards the front of the store here. 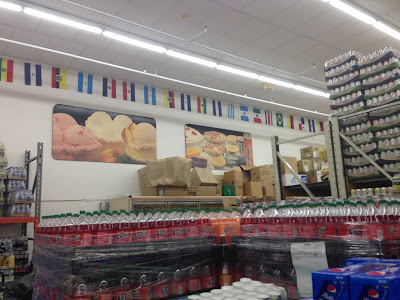 Up in the front corner there is a strange area that Atlantic has closed off and is just using for storage of boxes and other junk. It looks horrible. I'm not entirely sure what Giant would have had here (maybe just more grocery aisles). You can also tell the age of the decor by looking at these pictures on the walls; a simple paint job and new pictures would really liven up the appearance of the store. 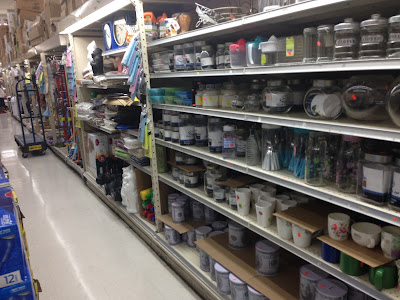 Like many other ethnic supermarkets, there is a very substantial non-food selection, but virtually no HABA. I don't know why this is the case just about everywhere! 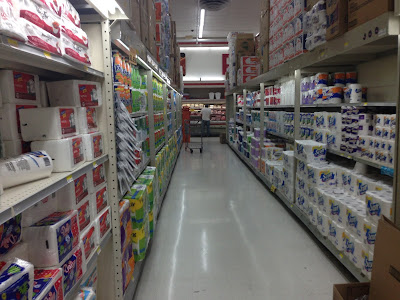 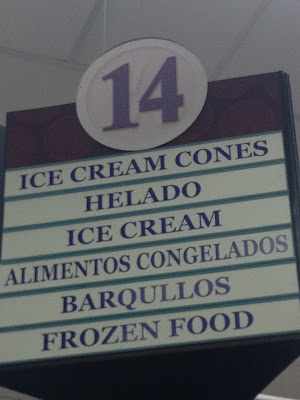 It's really hard to see in this picture, but this is actually an old Winn-Dixie aisle marker. You can see a better picture of one at Albertsons Florida Blog by clicking here. All of the aisle markers are actually old W-D signs, who knows where they're from! 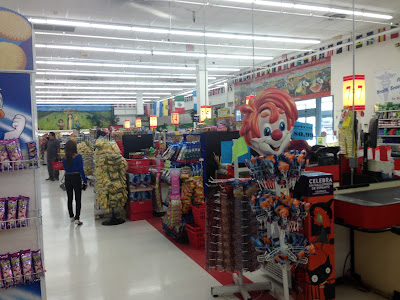 Heading out, we pass through a fairly standard front-end (looking towards the produce department). Here we can see more of the merchandise offered along the front-end: 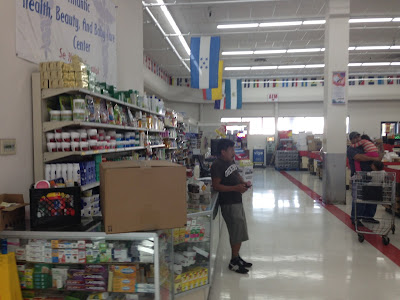 This is as much HABA as they sell. The entire front-end is also not used; the area behind the last few registers is closed off.

Although this store is interesting for its history, it's also a pretty good ethnic supermarket. I just wish it were a little bit cleaner and less cluttered.