The Rise & Fall of the Imperium 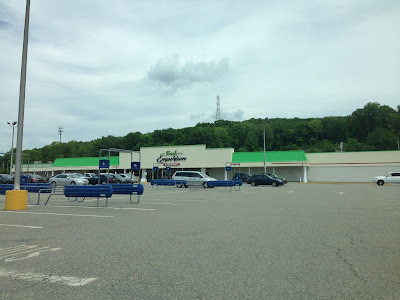 While the urban and suburban A&P locations often were the subjects of intense competition and bidding from outfits looking to purchase them, those farther out from the immediate NYC or Philadelphia areas more likely quietly closed without purchase. Surprisingly, independent investor Neftali Medina of the Bronx bid on two former Pathmarks, this new-build location in Jefferson, NJ, built in the 1990s (for $1.45 million), and a former Grand Union in Landing, NJ. (at only $400,000!). Medina claimed he would open the supermarkets "three to four weeks" after the purchase but in reality opened about two months later. He also claimed both locations' pharmacies would reopen shortly after the stores themselves did...which also didn't happen.

Fresh Emporium promoted itself online (on their Facebook account) prior to the opening as an upscale, natural and gourmet food market. This outfit suffered from what is known in marketing and psychology as the expectancy violations theory, which basically says that when people are expecting one thing and get another, they will be disappointed. So when the store opened as a cleaner (at the beginning) version of Pathmark, virtually everyone was disappointed. I originally thought that the group at least had some promise for the future, but after a short yet painful decline, both stores went out of business, Landing in February 2017 and Jefferson in May 2017.

Ruby S. on Yelp summed up the feelings about the Landing location pretty well towards the end:

"Reviewing for the Landing location:

"Why? Just why? Why even bother? Because you got a good deal on a closed supermarket?

"I don't even know where to start.

"1) It's just a god damn mess. They put barely any effort into getting this place ready. It's dingy, it's grimey, it's disgusting. The shelves are bare. And they still are using Pathmark's old red white and blue fixtures! You can see faint outlines of "Pathmark" everywhere. Just embarrassing.

"2) Horribly expensive to the point where it's just rude. Not to mention most of the price tags are hand written on scrap paper. I can't make this up.

"3) Used to be called Fresh Emporium until Food Emporium threatened to sue so they just took that word down and put up some cheap sign that says "Imperium". Imperium? Imperium? Obviously the owner is not a master of the English language.

"This place is pure trash and I think it's offensive to people of Landing who lost a decent supermarket. Not to mention jobs. And to replace it with this garbage dump that gauges prices. it's screwed up.

But let's turn back the clock...when I visited the Jefferson (the better of the two) location last May, it was just a huge, spacious store with some limited stock and decent prices. It had hope to become something better than what it was then. 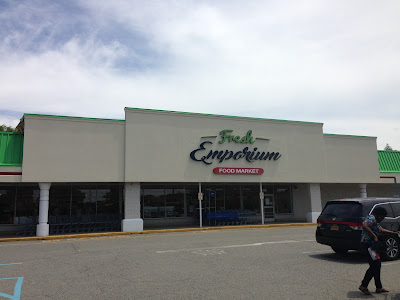 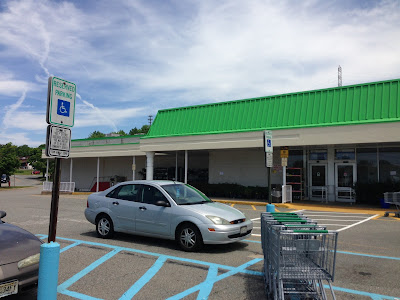 The entrance was on the left side of the storefront. Notice the indented area to the left; that's where pharmacy and HABA are. Not sure if that was an expansion at some point. I don't think it was, but it looks like it. Also it looks like someone forgot to paint that stripe red as it was on the other side.

The exterior looks promising enough. I'm impressed that they actually bothered to re-stucco the facade where the Pathmark logo was. You can still see where the outline was, as is the case with most of these facade redos. (Although it's not quite fair to compare this store to the LIC Food Bazaar, which looks like this inside.)

At this point I still was not aware this place was 100% Pathmark inside. I thought the facade was a good sign because it wasn't entirely different, but still fresh and new enough. This was the first bad sign... 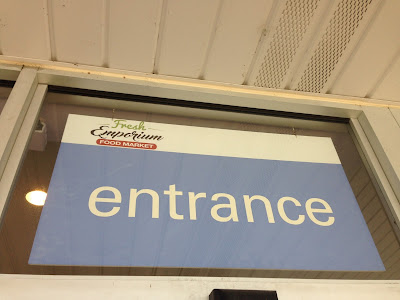 Yes, that's a Pathmark sign with the Fresh Emporium logo stuck on a stripe over the Pathmark logo.

Entering, you head straight into the produce aisle with grocery aisles to your right and the pharmacy/HABA section to your left. Meat, seafood, deli/hot food and milk are in that order along the back wall, with dairy in the last aisle and a tiny bakery in the front opposite the entrance. 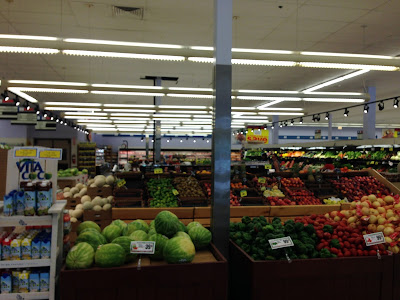 If you didn't know this was a former Pathmark, it's a perfectly nice shot of the produce department. The black track lighting might be new, as some of the cases are. But the rest of the store is quite Pathmark-y. 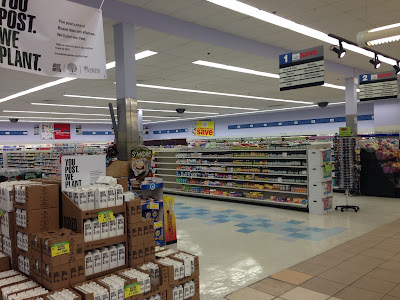 HABA section to the left of the entrance. Note the badly-patched floor in the foreground and the huge, space-filling display of boxed water! 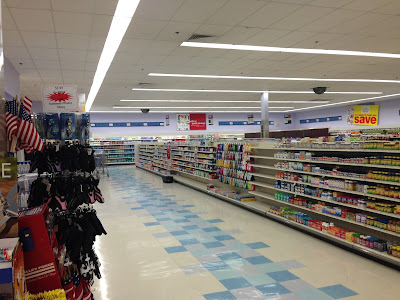 Looking over towards the sparsely-stocked HABA department, most of which was probably just left over from Pathmark. The manager's office and then the pharmacy are along the wall to the left, which is the front wall. 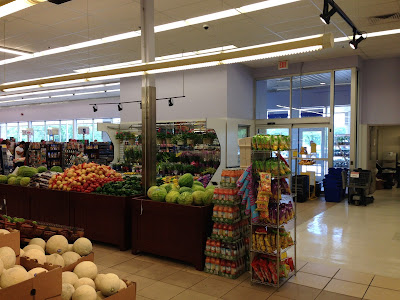 The entrance is visible here, as well as the small floral department and the checkouts along the front. The bins here are new. 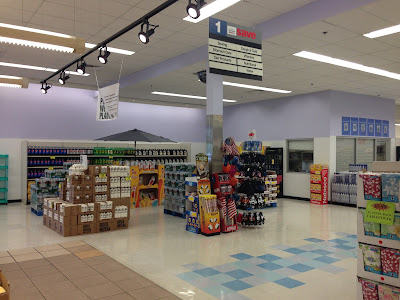 Strangely enough, this has been my most-viewed photo on Flickr for a long time. I don't get it! Here we have a random display area and then the old manager's office to the right. Fresh Emporium didn't seem to be using it. 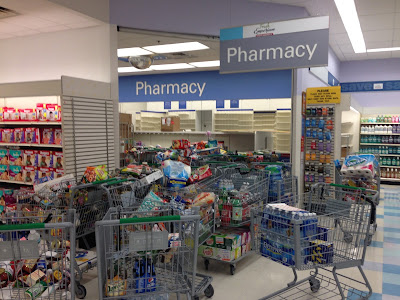 No pharmacy here! I truly wonder if they ever actually planned to open these pharmacies; the fact that the signs got Fresh Emporium stickers makes me think they did. The entire pharmacy area was filled with carts overflowing with random merchandise, maybe extra stock they're not selling. This seems like too much for returns for their first weekend in business! One Yelp review actually complained about the lack of shopping carts here, so this seems like a strange choice of use for the carts. 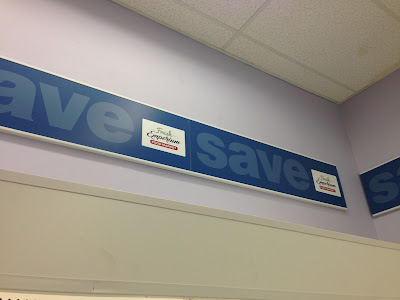 The transition was much better in Jefferson than Landing, as many references to Pathmark remained in Landing. I only found one here. 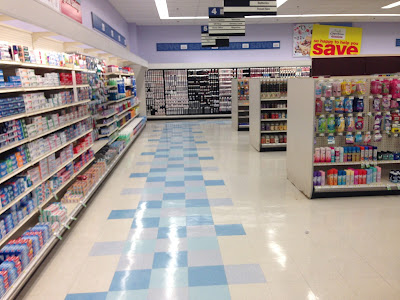 Looking towards the back wall of the store from the front pharmacy area. 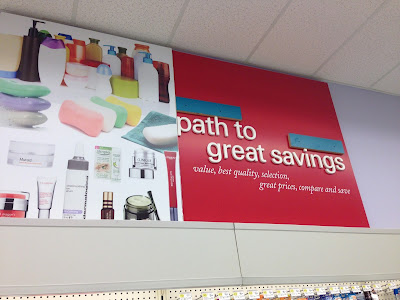 This sign had its yellow SAVE banner removed - the only one in this store. All of the yellow signs had been removed at Landing. 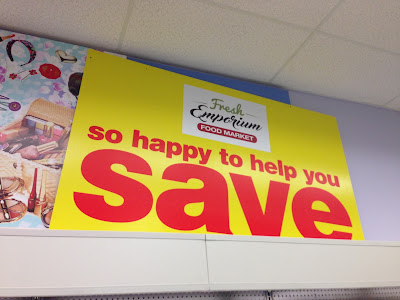 The rest of the signs here in Jefferson had these with Fresh Emporium stickers. 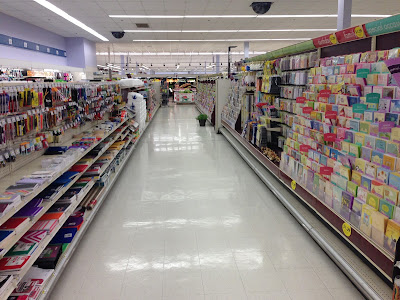 Looking from HABA over to produce and beyond that, the grocery aisles. 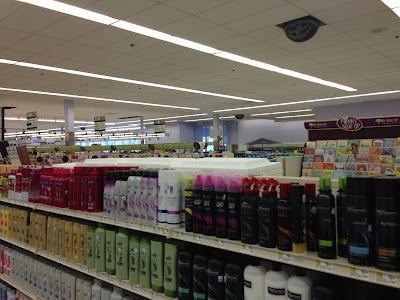 Well, they had plenty of shampoo, anyway. 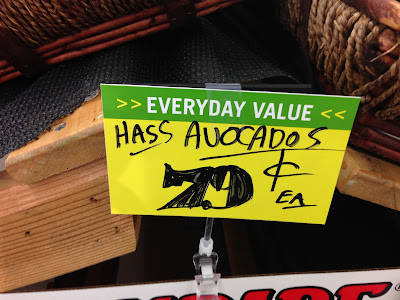 ...and plenty of Pathmark price tags left over. Actually that's a great price; I just paid $1.50 for a hass avocado earlier today! 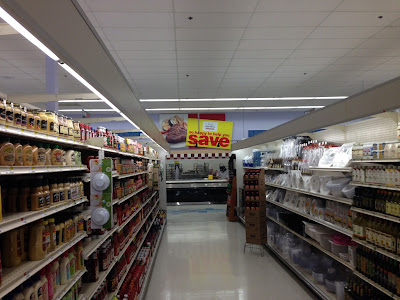 In the grocery aisles, it was a very Pathmark-like experience. The storebrand was now White Rose instead of America's Choice...but that's a minor difference! I think this store did actually have a better organic/natural/specialty selection than Pathmark would have, but still not as good as the average ShopRite or even Food Bazaar. 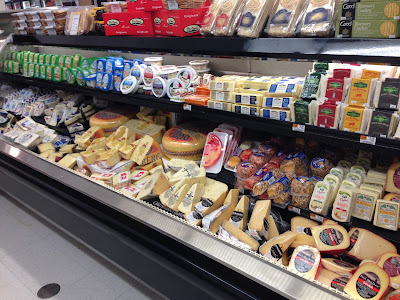 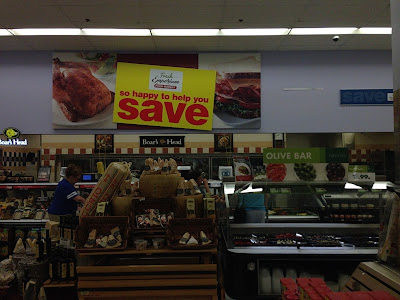 The deli, about halfway across the back wall, also included an olive bar and a small hot food counter. Medina was actually behind the deli counter, but he didn't seem to be doing anything in particular. His Freehold Fresh Market also closed recently, so I'm not sure how his supermarket business is doing. Most articles that discuss his supermarkets identify him as an investor, not a supermarket owner or operator, so he's probably not a very hands-on owner. That allows things like credit card fraud to happen in his stores (which was frequently reported at this location). That is assuming he wasn't in on it. 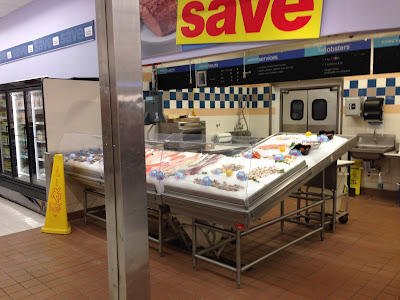 The seafood department looks pretty decent, and is directly next to deli. 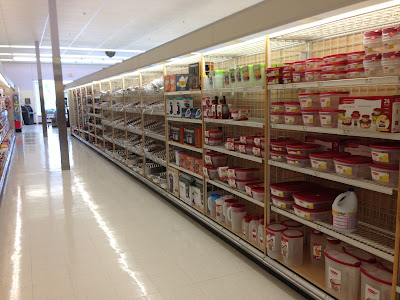 The store had a large general merchandise selection, acting as a partial supercenter for this area. No clothing, but lots of home goods. 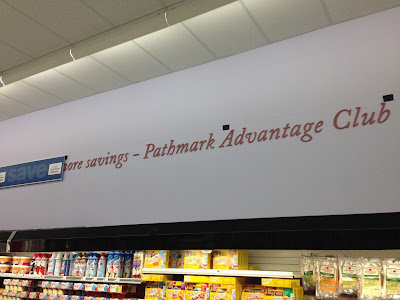 Hmm, do you think I can still join the Pathmark Advantage Club? 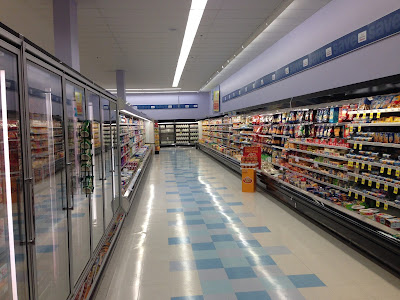 The last aisle looking back from bakery.

Based on my internet research, I have the following stores listed as Neftali Medina-owned locations:
Medina's supermarket business seems to be pretty rough; he and his affiliates have had conflicts with suppliers and about twenty years ago, a lawsuit with the US Immigration and Naturalization Service.

I wonder what will be moving into either of these Fresh Emporium locations, since they're far out of the busy urban areas, whose supermarkets were mostly filled quickly. I could see Weis taking one or both of these stores, but they'd have to invest a lot of money to bring them up to standards.