Welcome to today's store tour, with a fancy new graphic! (Bonus points to anyone who can guess what store that photo was taken in...it's one that has been covered on my Flickr page.)

For a while, Acme Markets had a moderate presence in western PA, with locations in Confluence, Connellsville, Uniontown, Salisbury, Meyersdale, Snow Shoe, Johnstown, and Phillipsburg, PA. Today the Confluence location is still very much alive and well, but under the independent Confluence Foodmart, which is affiliated with Western Family Foods (ShurFine/ShurSave).

The Confluence location was built as an A-Frame or pitched roof, as it is known on Acme Style, building sometime in the 1960s. It's virtually identical to the former location in Canton, PA, which later became a Bi-Lo and is now a Tops. Set slightly out of the small downtown area of Confluence, PA, the Foodmart is the only full-size, full-service supermarket in the area. Confluence is also home, however, to Diamond Produce & Deli, a small grocery store that I suspect may be a 1930s or 40s Acme: 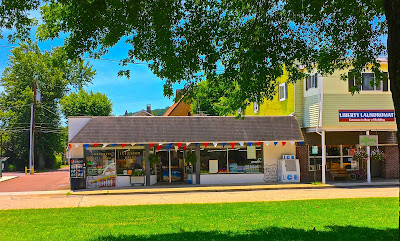 A few blocks to the left in the above photo, you will encounter the Foodmart. 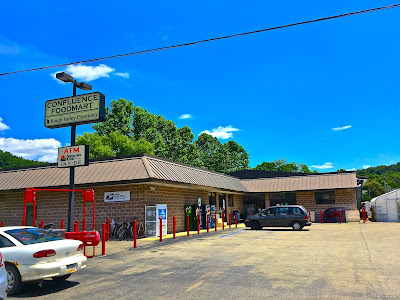 Looks like a pretty standard small-town grocery store. But do you see the pitched-roof Acme hidden behind the cinderblock expansion? 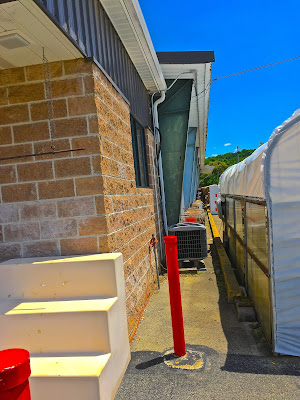 Aha! Notice how the beams slant outwards, just as they do in the Canton location, but unlike later-built stores. You enter on the front wall. Produce lines the side wall in the photo above, with meat along the back wall. Deli/bakery is in the far back corner and frozen foods are in the last aisle. There are very few checkouts -- maybe two or three -- and in front of them to the left in the photos above is an expansion (where the Post Office sign is in the photo above) with a large pharmacy and HABA section. Customer service is on the right side wall with pharmacy along the front wall of the expansion. The pharmacy may be operated by an independent business, as it is separately identified as the Yough Valley Pharmacy on the sign. (Yough, here, is pronounced Yawk, and Confluence is on the Youghiogheny ("Yawk-ee-oh-gainy") River. 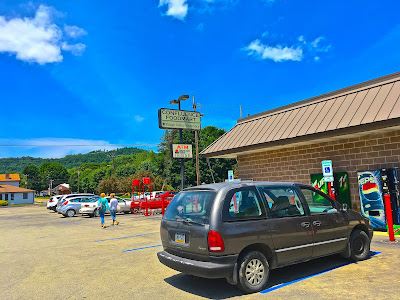 Closeup of the expansion. The main entrance of the store is behind me here. Customer service is along the wall visible here.

I stopped into this store for lunch while on the bike trail that passes through town. Although Diamond Produce has a deli, they will not make you a sandwich there. We were directed to the nearby Foodmart, where the deli did (extremely reluctantly) make sandwiches. However, I entered through the pharmacy area, so I didn't realize the store had an open pitched roof until I went farther in. My first thought was ACME! But I ruled out that possibility because I didn't think Acme was ever out this far west, but a quick internet search later that day revealed that they were, in fact, through about the 1970s. 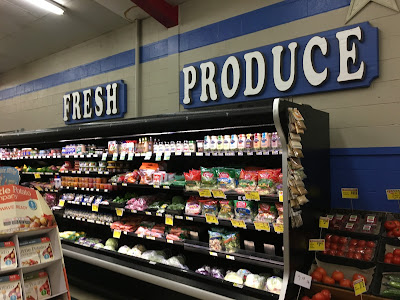 You enter into the produce department, a small section at the front of the first aisle. And yes, the ceiling is exposed... 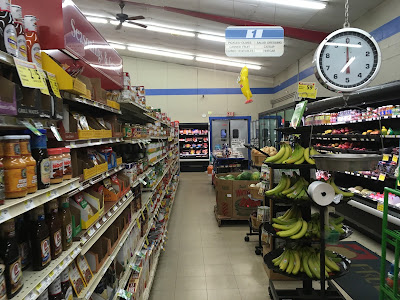 Looking from the front of the first aisle towards the back. Most of the cases looked pretty new. 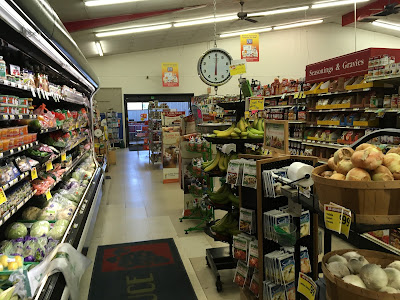 The door above is the entrance. Produce lines the side wall about 3/4 of the way down. 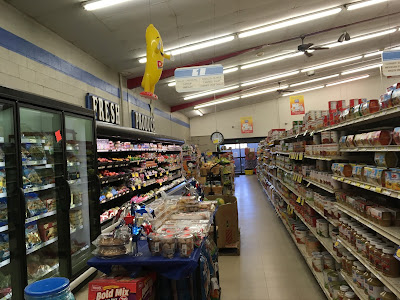 In the back are frozen seafood cases. The decor, I think, was installed by Confluence Foodmart or at least some prior tenant. 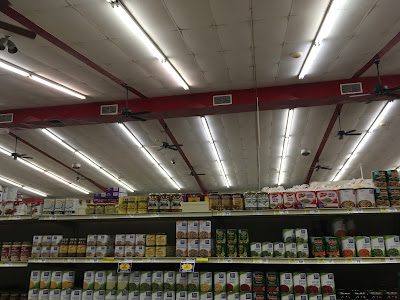 Looking from the first aisle across the store. Very impressive, every lightbulb is working! 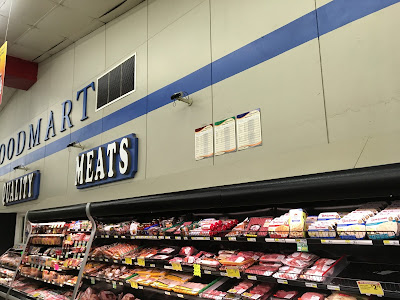 Meat department along the back wall. Two things are a little strange here. First, the sign along the top says only "Foodmart", not "Confluence Foodmart", which makes me wonder if it was brought in from another store. Second, under the butcher window on the left side of the photo here, the cases were stocked with...cakes. Huh? 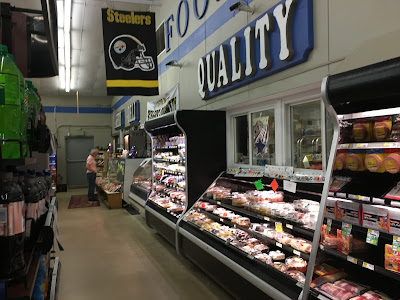 Explain that one to me. Just past the butcher window is a deli/prepared foods self-serve case, then a hot food case, then the deli counter, with a few baked-goods cases past that. 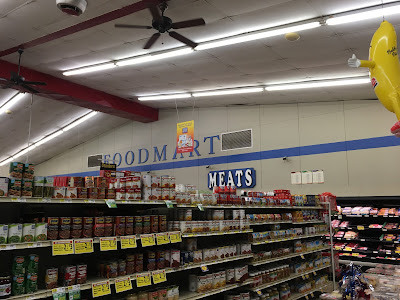 A better look along the back wall. 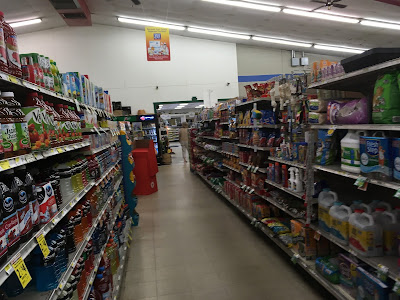 Looking towards the front of the store from a grocery aisle. You can see the walkway into the pharmacy/HABA area from this part of the store. There are a few checkouts to the left of that doorway. 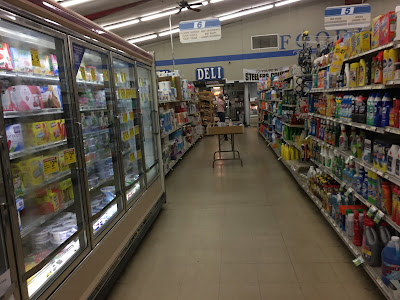 The second-to-last aisle has a few freezer cases as well. Deli/hot food are under the DELI sign. 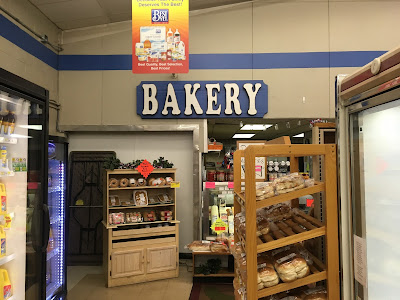 I think the Foodmart does bake in-store, but the bakery is not a service department. Can anyone tell what is behind that bakery display? Looks like a freight elevator, but it's a strange place for it, especially since it's right up against that wall. 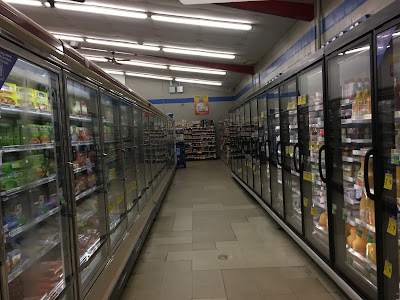 Last aisle looking towards the front of the store. Obviously the freezer cases on the right side are much newer than those on the left side. Boy, that floor sure needs some help also. 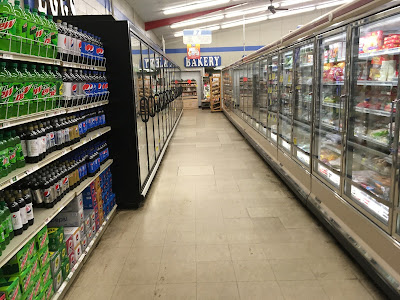 Looking back up the last aisle. 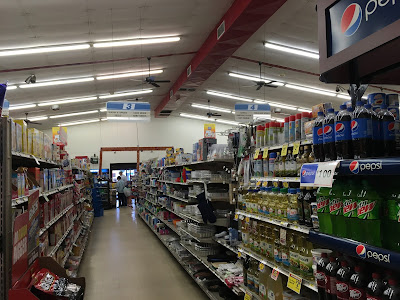 One more look at the great ceiling before heading into the expansion... 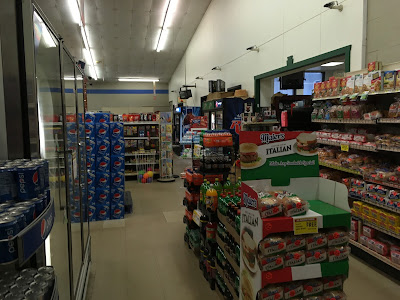 Here we can see the front end. The few registers are past the display of Pepsi cans and the hallway into the expansion is clearly visible to the right here. 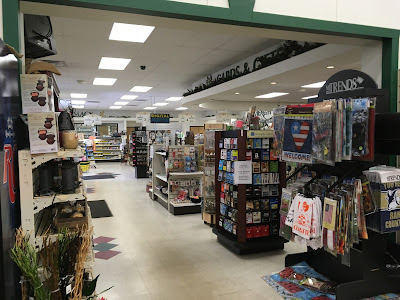 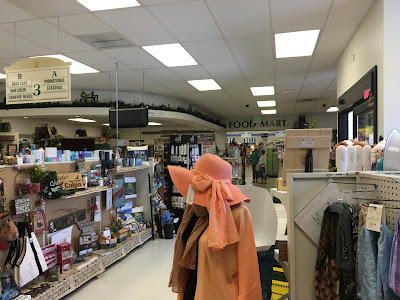 Looking back towards the supermarket entrance, which is under the sign that says "Food Mart". Customer service is on the right here and the entrance/exit is in front of it. Service pharmacy is behind me. 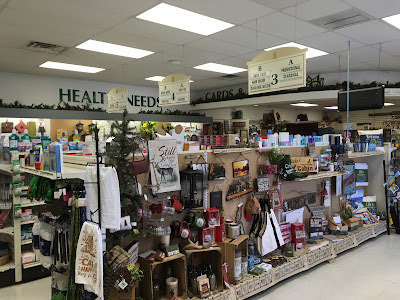 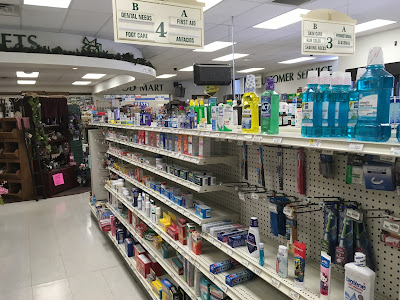 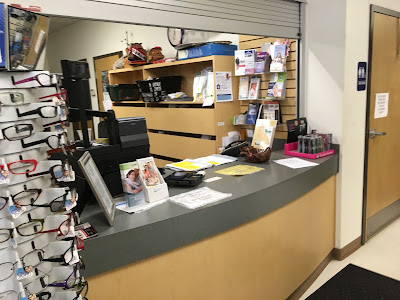 Service pharmacy in the front. Heading out, we see that like many independents and small chains, the carts are a mix of other chains' rejects... 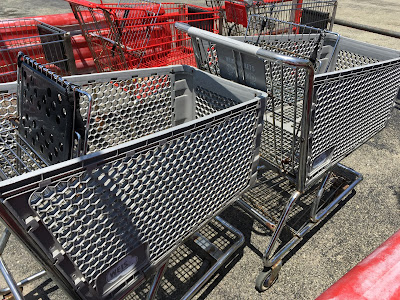 Check out that Weis logo! 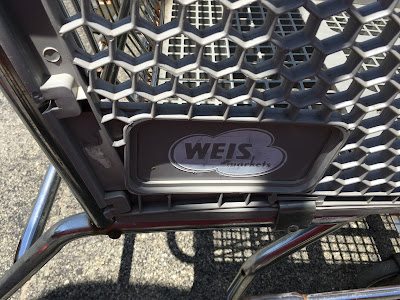 Pretty cool store for its history. The staff, however, surprisingly was much less friendly than what I'm used to here in the NYC metro area...the exact reverse of what you'd expect!