A Tale of Two Four! Supermarkets

Remember when the only chain willing to go into low-income urban neighborhoods was Pathmark? The Mount Vernon, NY Pathmark is a prime example of that. Opened in the 1990s, the store's advantage over the nearby competition was size. 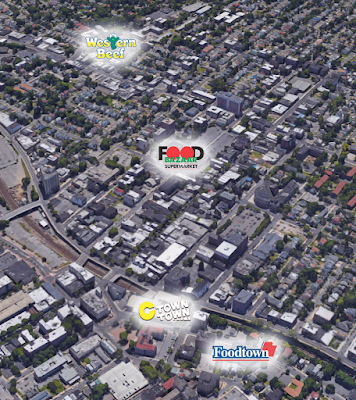 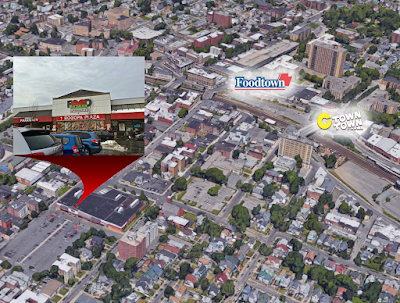 At over 60,000 square feet, the store is enormous for the area. The Western Beef and Foodtown are probably more in the 30-40,000 square foot range and C-Town is more like 15,000 square feet. Pathmark closed around 2012, with Food Bazaar opening soon after. After the store was opened, Food Bazaar began an extensive remodel -- more on that later. The approach is certainly impressive, at least the way I came in. Mount Vernon is a low-income, urban area and Third Street, one of the main roads through town, is very narrow and busy. 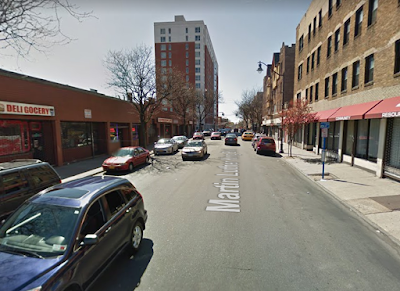 At the corner of Third Avenue, it opens up a little bit to the right. You can see the Food Bazaar sign. 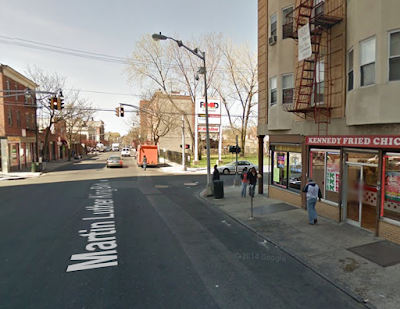 When you make a right at the traffic light, you enter the (newly-renamed) Bogopa Plaza, formerly Pathmark Plaza. This takes you directly to the store... 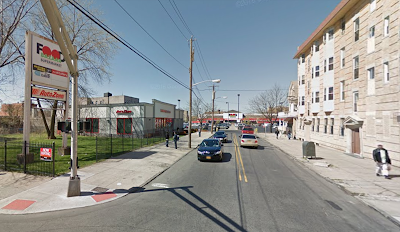 Gee, I wonder if Pathmark's architects laid out the property like that intentionally? As usual, the street views are from Google Maps. 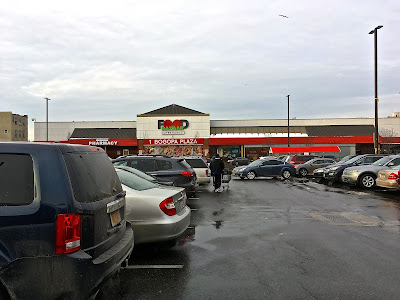 I think this store does very well. When I visited on a Saturday around dinnertime, it was packed. 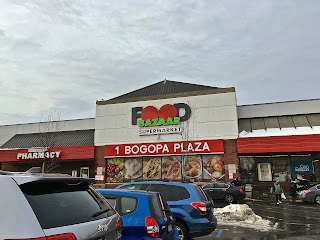 "Bogopa" is the Korean word for yearning or desire...and the name of the corporation that owns Food Bazaar.

This store's layout as a Pathmark was a standard Pathmark Super Center design.

(This is my own diagram based on my knowledge of other Pathmark Super Centers. Please correct me if I'm wrong!)

Food Bazaar moved in with minimal renovations, just a new paint job and some layout changes. Most important was the conversion of the HABA department to an ethnic foods department.

Again, this diagram is only marginally accurate. It's just to show the general idea. About a year after opening, Food Bazaar began a major renovation of the store, moving all of the service departments and the produce department. (I've set the "before" layout to a lighter opacity for comparison.)

I think Food Bazaar took a little of the backroom space for the bakery/deli/hot food area. They've also added an independently-operated pharmacy into the front corner. Courtesy is back where it belongs on the front end, and ethnic foods have been moved to the grocery aisles. 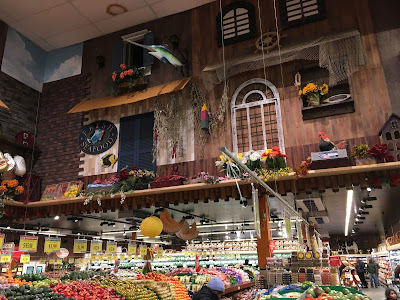 After entering, you make a left turn into the produce department. Here we're looking towards the back wall of the store with grocery aisles to my right above. This decor is incredibly intricate here! I believe Food Bazaar added managers' offices above the produce section, explaining the low ceiling. 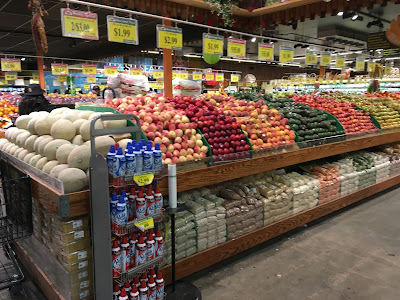 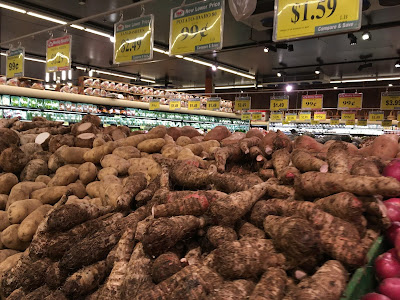 As with any ethnic grocery store, there's a huge selection of these assorted root vegetables, none of which I know anything about. I think what I probably have to do is just buy some one time, and figure out what to do with it, and just go down the list! 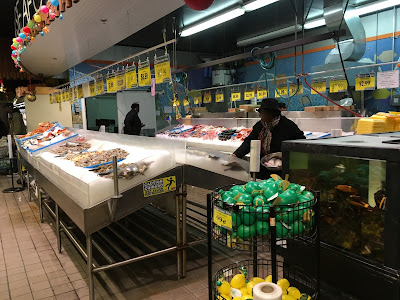 Seafood is set up as a self-service department, and there are employees available to prepare fish to order if you prefer. 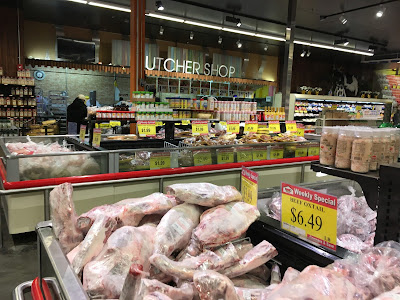 The butcher shop is along the back wall of the grand aisle, with packaged meat in lower cases in front. These coffin cases look quite old, but I don't know if they were Pathmark's. 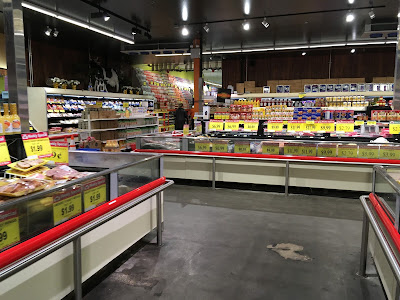 There is a pass-through to grocery at the front and back of the store. Here we're looking along the back wall towards bakery and deli. 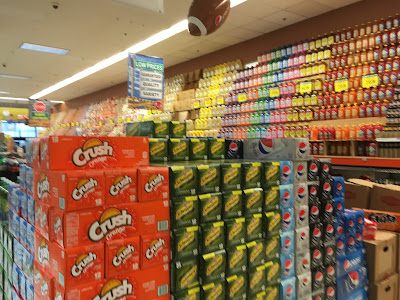 The ubiquitous "wall of values" in the first aisle. On the other side of this wall is the produce/meat/seafood room. 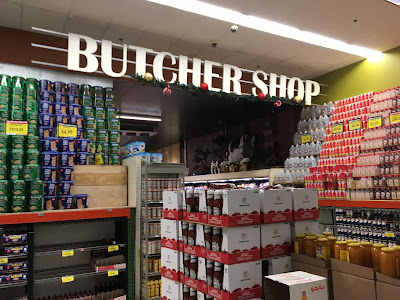 Towards the butcher counter in the back. 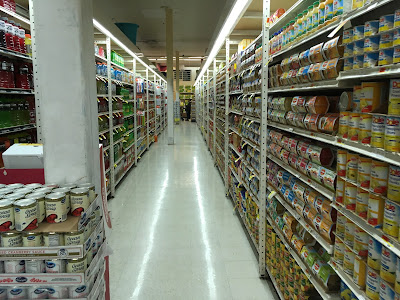 The grocery aisles are pretty standard. Food Bazaar replaced the shelving, but I don't know if it was during the renovation or before they opened. 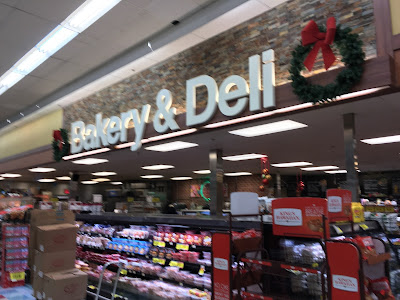 I think Pathmark's meat cases would only have come out as far as that case on the bottom here does. The bakery and deli are under a lower ceiling in what probably was backroom space. 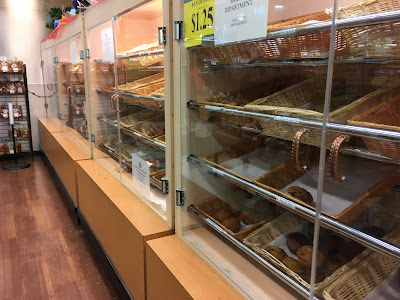 Bread and rolls are to the left of the service bakery/deli. They were CLEANED OUT when I visited, but it was the end of a Saturday. 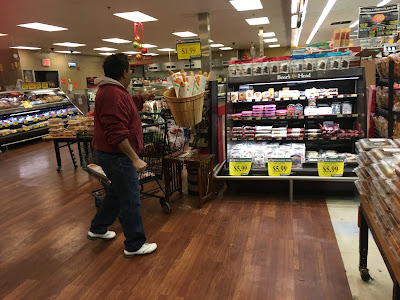 The fake-wood floor is where the expansion would have begun. 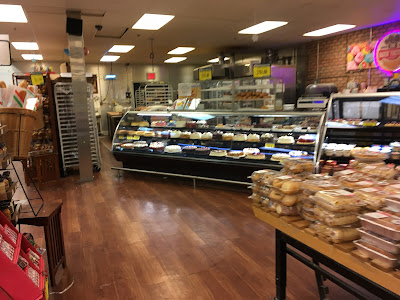 Service bakery with deli to my right and hot food behind me. 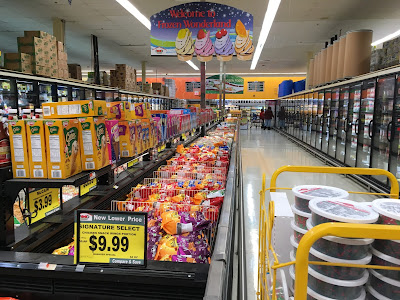 Jumping over to the front of the freezer aisle, we see that the coffin cases have not yet been replaced. And I'm just noticing now that the sign in the front here is advertising something Signature Select brand, an Albertsons (Acme) brand! I don't get that! 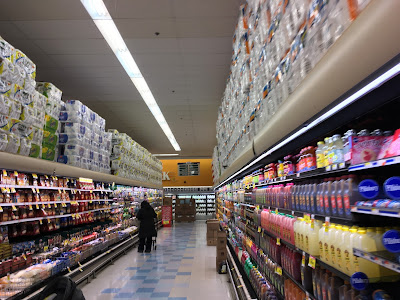 Dairy in the last aisle with Pathmark flooring intact. 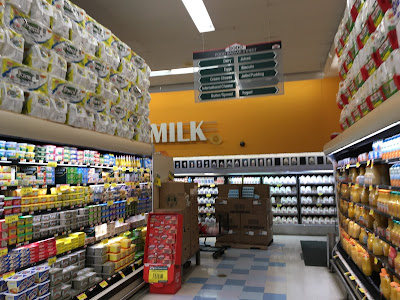 Milk in the back with all-original Pathmark cases and flooring here too! 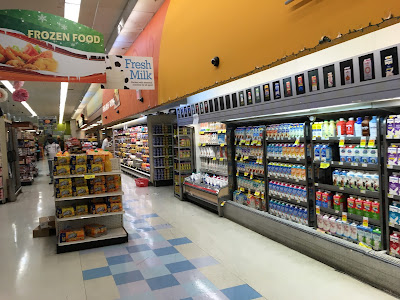 Looking along the back wall towards the bakery/deli area and then butcher past that. 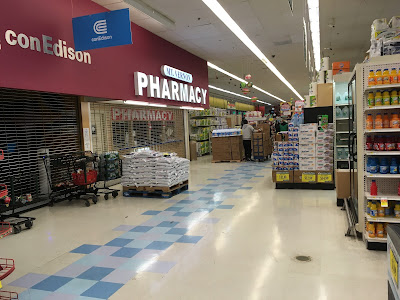 I'm not sure exactly what the ConEdison office does (maybe bill payments), but the pharmacy is standard. It's an independently-operated business and was closed at the time of my visit -- but is in business. 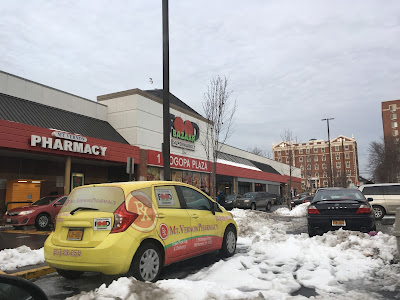 Strangely enough, the pharmacy delivers but the store does not. 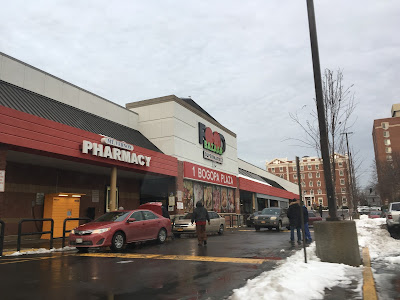 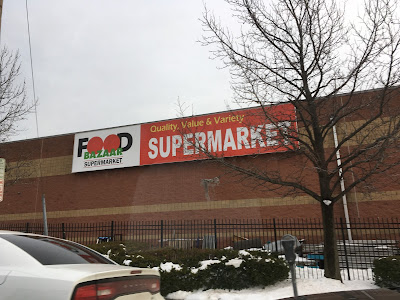 Around back, where the store directly backs up to a residential street, we see Food Bazaar struggling to fill the width of this Pathmark sign. Also I think they'd better check the centering of the Food Bazaar logo on the white rectangle!

Another great Food Bazaar although this one is clearly in rougher shape than some of their newer stores like North Bergen or Fairview. One more in this series coming soon...Western Beef on Friday!