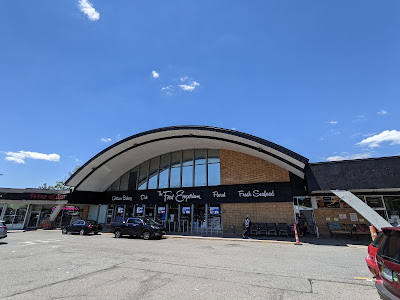 Our second of three Special Reports today is the brand-new Food Emporium in Fresh Meadows! This store was built as one of the distinctive arched-roof Penn Fruit supermarkets, later taken over by local chain Hill's before that chain was bought out by Waldbaum's. In 2016, as Waldbaum's parent A&P went out of business, this store was sold to Key Food Stores Co-Operative. It operated as a Food Universe Marketplace for a few years before being switched over to former A&P, now Key Food, banner The Food Emporium last month. I wrote in my previous post that this store was owned by Shri Persaud, who owns other Key Food stores, but I'm now questioning that (I forget what my source was on that) and I think the owner is in fact Sang Won Lee, who's listed as the client on some renderings by DY Design posted on Google Maps. Note the consistency in exterior signage on this store with The Food Emporium in Howard Beach, also designed by DY Design. 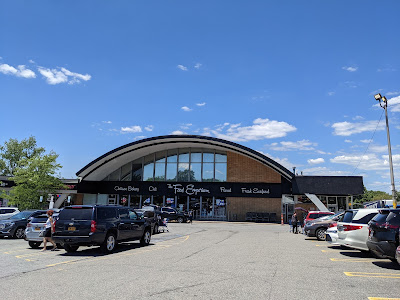 The storefront is looking better than ever with its fresh coat of paint and new Food Emporium signage. 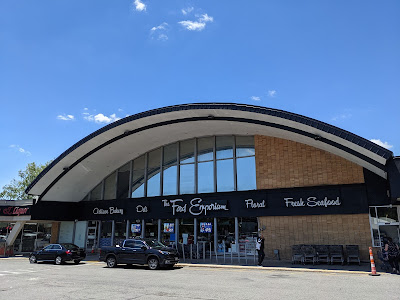 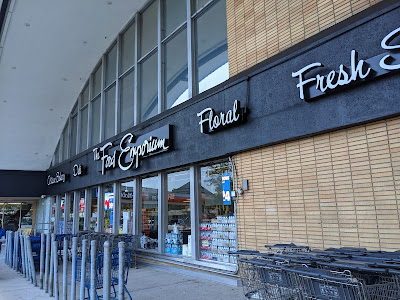 The store uses a combination of bright blue, Food Universe-labeled carts (seen to the left) and the blank gray ones to the right, brought in at the time of the switch to Food Emporium. There's also a few random secondhand carts from elsewhere, plus some Waldbaum's carts, which you can see near the windows. (I'm sure Retail Regents, who even runs a whole blog about shopping carts, will have something to say about these.) 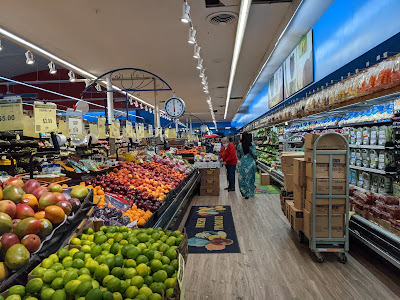 We can see that here inside, not a whole lot has changed, although the produce department has been reset and expanded with a row of produce cases along the left side of the first aisle, which had previously been grocery shelving. Waldbaum's decor is still fully intact, though! The new flooring is looking very good. 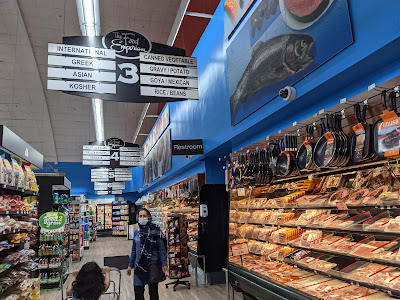 The walls had been painted with Food Universe's signature blue when they moved in, and that so far hasn't changed. It'll be interesting to see if it is changed in the future -- the blue and brown color scheme on the outside has been painted solid black, and I think this store's walls would probably look pretty great painted black around the existing decor. The aisle markers are new, and it looks like the grocery aisles have been reset too, most noticeably expanding the international (seen here) and organic/natural selections throughout. No service seafood here, though, and I wonder if it was ever in this back corner I commented on in the previous post. That section has been reset with water and beverages. 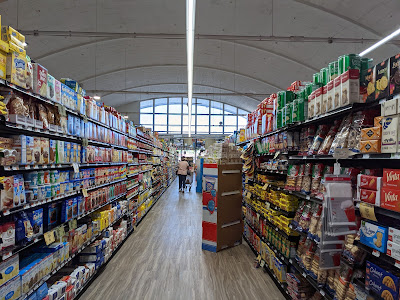 Note that the new wood-texture flooring now extends throughout the store. We can also see here that the grocery shelving has been replaced, and the lighting (which was previously built into the shelves) has been moved to hanging from the ceiling. It really brightens up the whole space which is important since the ceiling is so high here. 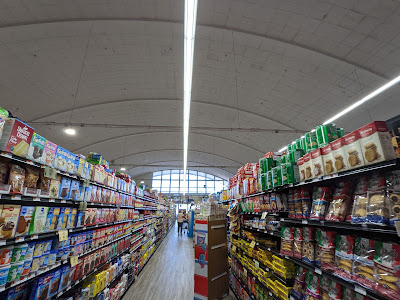 Some fun with the wide angle lens. 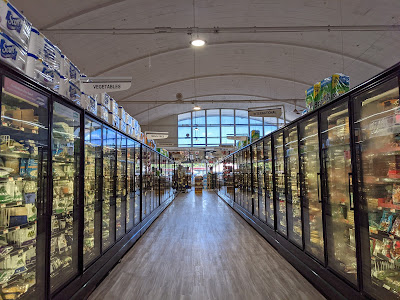 Frozen foods in aisle 4 looking much more streamlined than in the past. As I mention in that post, the cases were replaced by Food Universe upon taking over from Waldbaum's. 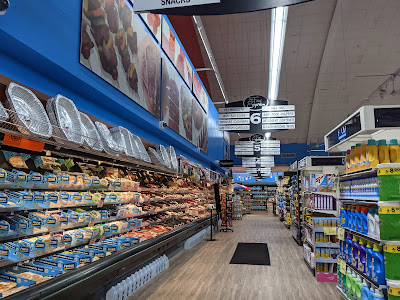 A shot across the back wall. It's amazing what a difference some new lighting, flooring, and aisle markers can make -- see here. And note the Food Universe endcaps, which haven't been changed out yet. I assume there's no hurry, since both brands are owned by Key Food. At the time of my visit, the receipts still had the Food Universe logo. 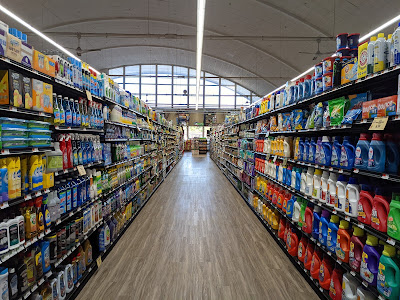 A pristine nonfoods aisle at the far end of the store. 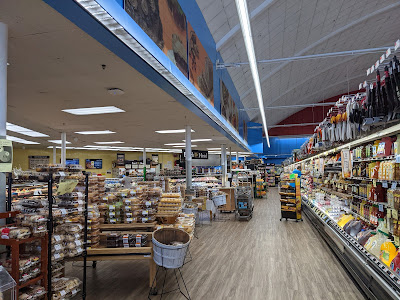 Dairy and deli/bakery are in the last aisle, a surprisingly west coast-style layout in a very east-coast store. The layout is left entirely from Waldbaum's, who I assume was the last to fully remodel the place. As we can see, Food Universe and Food Emporium have put in money, but have kept everything where it was. 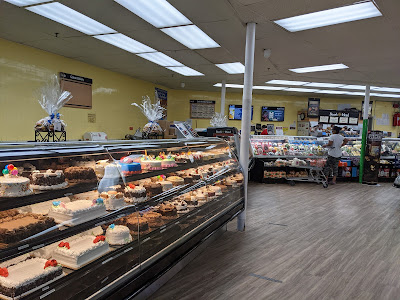 We get a double dose of history in deli-bakery, with Food Universe logos still on the deli menu screens and Deli Weekly Specials and Corner Bakery signs left over from Waldbaum's. I assume that'll all be changed over in time. 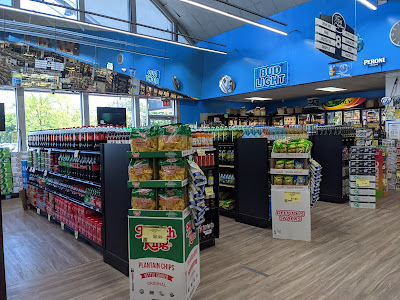 Beverages and beer have been moved out of the grocery aisles into this front corner. I'm not entirely sure what was here previously, but it feels like a register or two might've been taken out to accommodate this section. I assume to counter that, four self-checkouts were installed on the front-end. 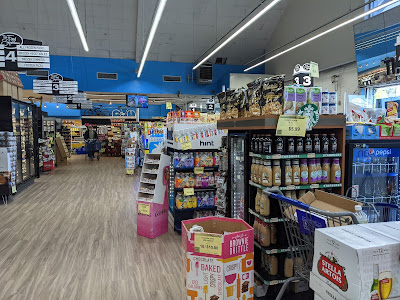 Looking back towards the first aisle (self checkouts are actually between registers 2 and 3). And if you zoom in, you can see on the handle of the cart to the right "FOOD UNIVERSE 1942," this store's number. The very old mirror on the front wall and Waldbaum's "Thank you for shopping" have also remained up, and there is still no logo on the front end, either. But there are some really nice upgrades to this beautiful midcentury modern architectural relic. Worth checking out if you're around here! As for today's other posts, make sure to check out SuperFresh in Jackson Heights and Food Bazaar in Douglaston, plus see what's coming next here.