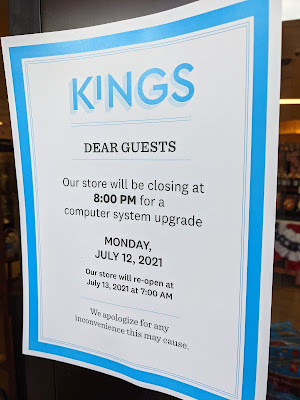 Please pardon the Union County interruption for an announcement. Since ACME Markets bought NJ-based chain Kings Food Markets back in January of this year, I've been on the edge of my seat waiting for any changes at all. So far, there have been very, very few. The liquor store closed in the Livingston location, but other than that, basically everything has remained the same. As of writing, Kings is even still receiving wholesale deliveries from Wakefern. But I got quite a surprise when I stopped by the Livingston location yesterday. First off, the notice above was posted prominently near the entrance informing customers of an overnight closure for a "computer system update" which I can only assume is replacing the POS system with Albertsons' system that is in use at ACME and other Albertsons banners. (The question is, will this change be happening at all the Kings stores, or is this the first?) The second thing, I didn't notice until after I had left the store, then I noticed the former cafe area in the front corner, closed for a long time due to the coronavirus, was in fact under construction. Turns out a major remodel is beginning, although it remains to be seen just how major it will be. Here's a shot of the blueprints I grabbed through the front window. 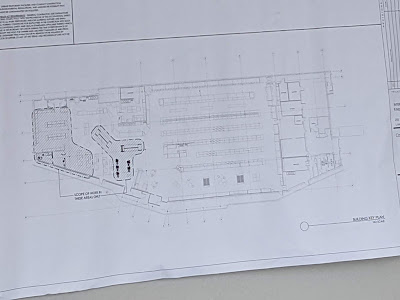 Okay, so what are we looking at here? As we can see, most of the store is simply represented as it is currently. But those two areas are marked off to the left indicating work will be done there. Here's the store's layout as it currently is... 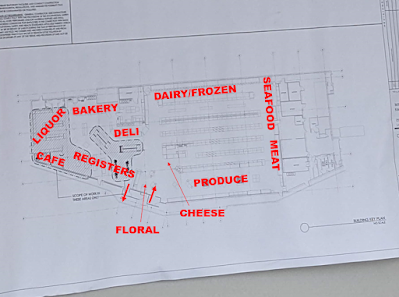 Here's approximately where each department is currently. Note that the liquor store has been closed since 1/2021 and the cafe has been closed since 3/2020. I'm no architect, but we can figure out exactly what is going on here based on what's represented on the blueprints. The things in red are the changes to be made... 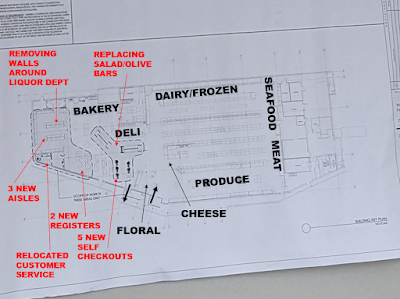 It's also of note that these renovations are a lot like what we're seeing in ACME stores, especially in the deli and front end. Now the question is, what's going in those aisles next to the bakery where liquor used to be? It seems logical that it would be either natural foods, which replaced liquor in the acquired A&P stores, or health and beauty which is frequently separated from the grocery aisles. It's also possible that it will be bread and condiments, which would be logical near the bakery (see Montclair). The bigger question to be is... will Kings replace the decor in this location? Like most stores, the Livingston location has the attractive but unbelievably boring Where Inspiration Strikes decor. I think we have a few decor options, the first and simplest being no change at all. The remodeled sections of the store would then just be painted the same colors as the rest of the store. There could also be some variation on Quality Built (see Montclair linked above). And finally, this might be wishful thinking, but it seems not out of the question that Albertsons would bring in its newest decor package, used in the smaller-format and higher-end Pavilions and Star Market chains in California and Massachusetts, respectively. See an example of that decor here. It would seem logical to bring that decor package in since the latest ACME, on Walnut Street in Philadelphia, has neither Quality Built nor that decor package, and it would make sense if Albertsons wanted to separate ACME's decor packages from Kings'. And in Massachusetts, Shaw's uses a variation on Quality Built while Star Market uses a different package, including the one linked above in their newest store. I will be sure to keep an eye on this progression, but if you see any changes at your Kings or have any input on this or other remodels, let me know! And now, back to your regularly scheduled programming.