We saw the Super Foodtown of Lake Hiawatha in Parsippany, NJ over a year ago, a converted Grand Union that closed in the 2001 bankruptcy and was taken over by the LaRacca brothers, who had a small chain of stores under the Foodtown group. Today it's their only store. However, that Grand Union was likely renovated and expanded to coincide with the closing of their other store in Parsippany, this location on Littleton Rd. 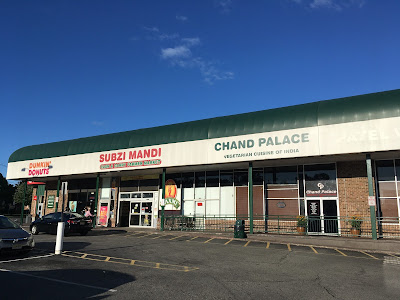 Today the building has been divided among several smaller stores, including Dunkin' Donuts, Subzi Mandi (an Indian grocery store), Chand Palace, and Pearl Banquet Hall. Subzi Mandi always has a random assortment of shopping carts, many retired from the nearby ShopRite.