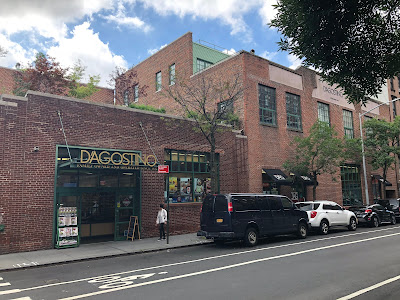 This D'Agostino is a perfectly acceptable supermarket, though nothing special. It's in better shape than most of the D'Agostinos I've been to, and the building is certainly more interesting. It looks like the lower brick building to the left (the store now extends into the two-story building on the right) might be a very old supermarket, maybe an early location of the D'Agostino chain. This store, located at 790 Greenwich St, Manhattan, has some amazing sales. Excuse me, amazig. 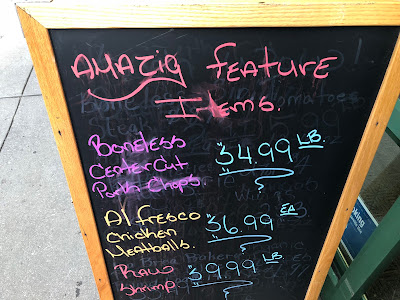 D'Agostino always has high prices, but I think it's worth considering they're one of the very few supermarkets that actually operates in the neighborhoods they're in. But not in the way you might think -- they run stores in some of the most affluent (and highest-rent) neighborhoods of Manhattan, meaning that all the lower-cost stores have been driven out of business by rising rents. So I don't think it's particularly helpful to say that Food Bazaar usually has the pork chops about $3.49-$3.99/lb or the shrimp closer to $6.99/lb. So to be clear, I'm not making fun of D'Agostino's prices here, just their spelling!