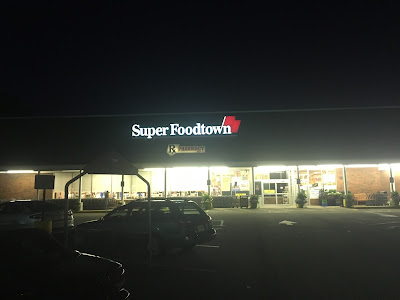 It's no secret that the Lake Hiawatha Super Foodtown in Parsippany, NJ is a former Grand Union, but there is a surprising lack of coverage online. That is, until Styertowne posted a complete tour of the store on Flickr a few months ago. I kind of had a general idea that the Lake Hiawatha Foodtown was almost 100% intact from Grand Union, but I didn't really have a good idea of GU's decor packages (hey, in my defense, I was about six months old when C&S took over GU). Of course, I had to get my own pictures of the interior after confirming that it was a former GU - you never know when a store like this is liable to close, or in the other direction, renovate.

This store is owned by the LaRacca brothers, who have not exactly had a peaceful career in the industry. They've also downsized their operation significantly; this is the only store that they still operate. A few of their former stores include:

You'll notice the large number of carts lined up outside. The first time I was here was before Farmtastic closed, and there were fewer, much older carts that all said FOODTOWN on the handle. Now, all the carts are much newer and all read FARMTASTIC SUPERMARKET. 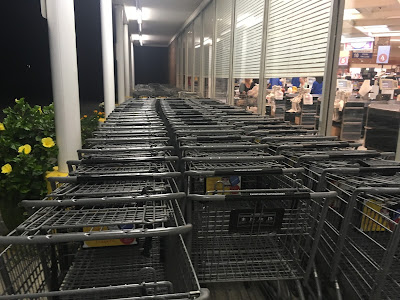 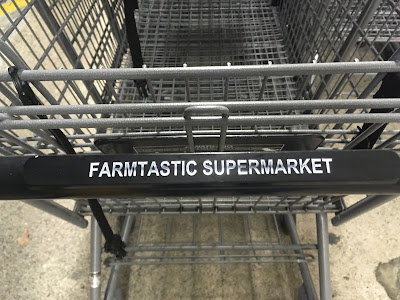 Heading inside, there is a small alcove where Grand Union may have stored carts, but is now just pretty empty. 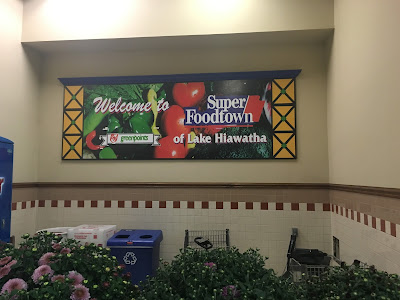 This "Welcome To" sign is 100% Foodtown. You can see a similar style sign in a Foodtown in West Palm Beach, FL (although the store is owned by a different person, the same design firm likely produced both signs).

When you walk into the store, you make a slight right turn under an arch that leads you into the grand aisle. 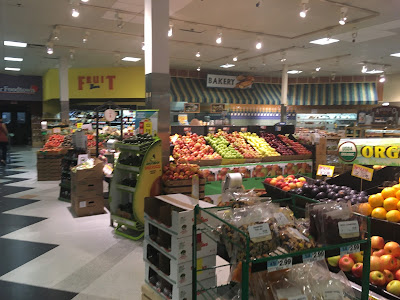 Virtually all of the decor you see here is original from Grand Union. I'm willing to bet most of the fixtures are as well. If anything, the produce bins in the center of the produce department are new. There are refrigerated produce cases that line the wall to my left. 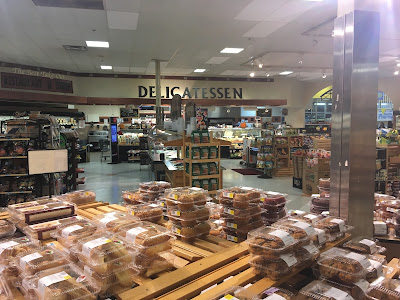 The deli is immediately inside the entrance to the right. There is also a hot food bar, and a salad bar that seems to be open any time they feel like it. Other times, it's stocked with chips or bottled water (although they seem to be keeping it open more consistently now). 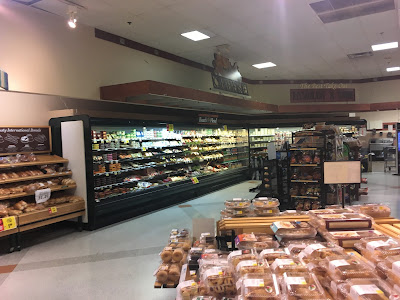 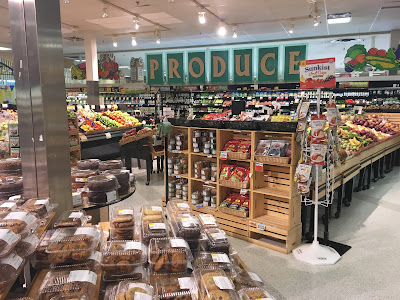 The decor looks remarkably good here for being at least 15 years old. 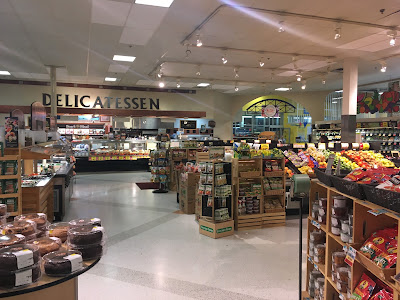 In the back corner of the grand aisle is the bakery department and "Fruit Bar". I'm not sure whether there ever was a fruit bar there, or if they just mean precut fruit, but nowadays it's just more regular produce. 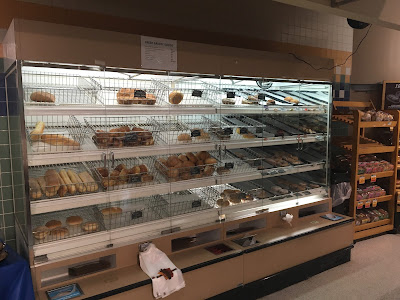 By the way, the chocolate glazed donuts here are really good. So are the onion rolls. 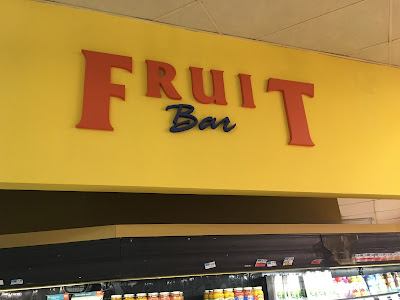 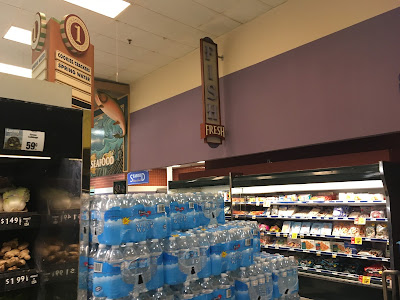 Somehow this sign doesn't quite work. I get the idea, but it comes out as "Fish Fresh"! By the way, it would seem that the aisle markers are original to GU, but around the number it says "Fresh & Friendly Marketplace", a Foodtown slogan. I don't know if it was originally used by GU, but Foodtown now uses it on other stores as well. 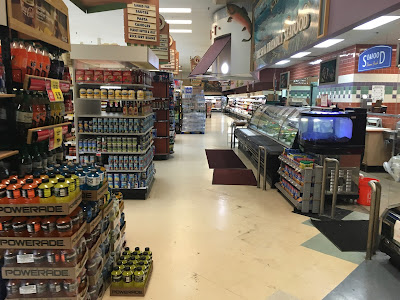 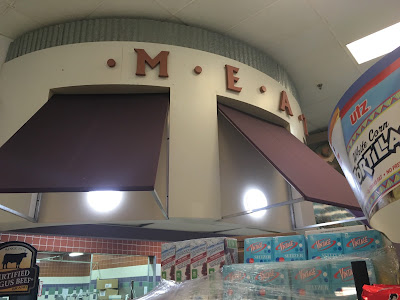 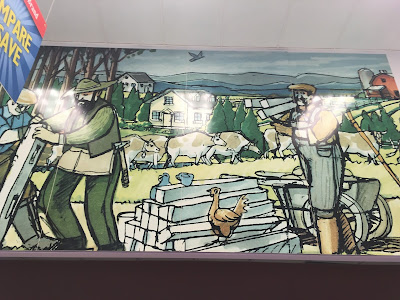 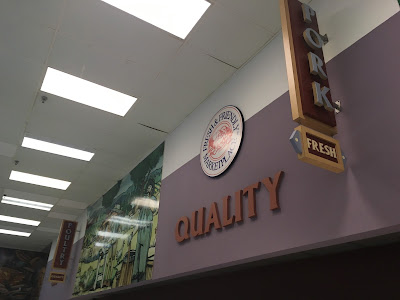 The second-to-last aisle is the dairy aisle. Both sides have dairy cases. 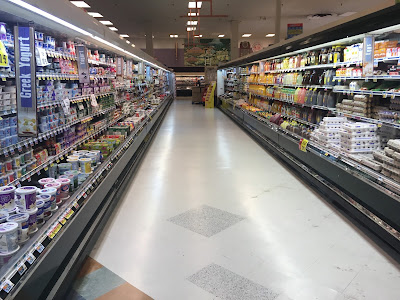 At one end of the dairy aisle, there are some problematic dairy cases that seem not to work. At least, they've never been working the times I've been in this store. It seems the owners have some hope of getting them up and running again soon, though, because otherwise I would have stacked more products in front of them - maybe cases of water bottles or paper products, that would cover the entire area. 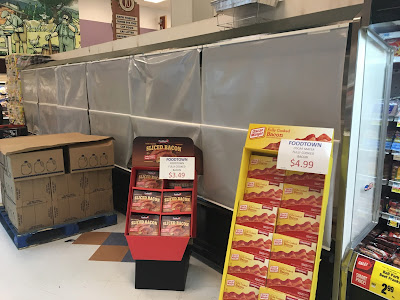 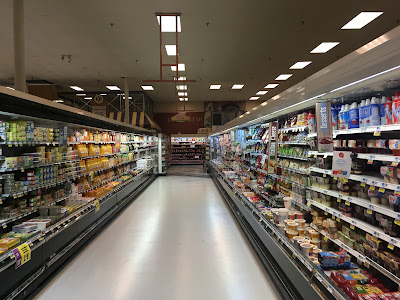 The striped awning to the left above is the customer service counter.

The last aisle is the frozen food aisle. The cases are clearly left from GU. 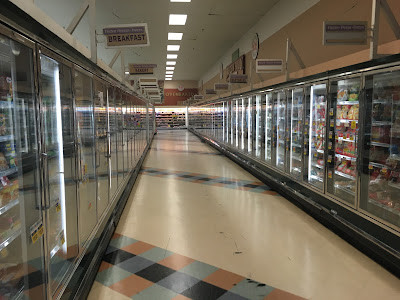 In the front of the store, there is an indentation next to the customer service counter where the bread is. Hate to break it to you, Grand Union, but neither "ovenbaked" nor "tastyfresh" (to the left of the picture) are words. 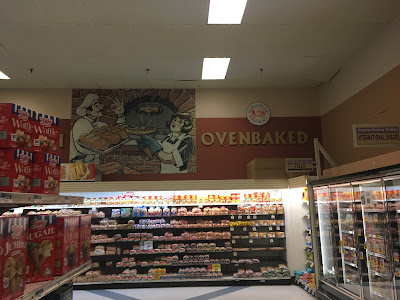 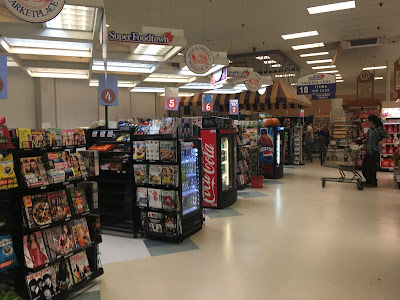 The front end seems to be pretty original from GU as well. The signs on the overhead structure are new, but I'd be willing to bet the structure itself is from GU. Behind me here there is an independent pharmacy, the Hiawatha Pharmacy. This pharmacy is independently owned and operated and was added by Foodtown in 2002 when they opened. It seems GU's customer service counter would have been there, and I'm not sure what would have been where Foodtown's service counter is. 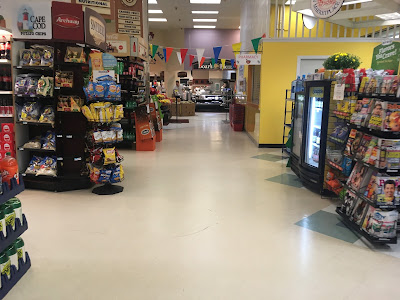 Here we're looking back towards the grand aisle from the front-end. The yellow walled area is the pharmacy. 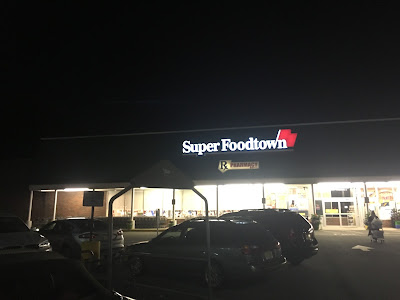 Although you can't tell here, the facade is similar to other GU stores, like this former location in Landing. The front wall in Landing comes out farther under the awning than at this Foodtown, and the interior layout is different (given its time as a Pathmark), but you get the idea.

The Lake Hiawatha Super Foodtown is definitely worth a stop if you're in the area. Sure, it's an original GU, but don't forget it's actually a really good supermarket as it is today. It even has products and services you wouldn't expect in a store like this, like in-store bakery, floral, seafood, organic produce, and pharmacy. And it does seem like the owners are making an effort to improve - although there are still some kinks to work out.