There are almost 5,000 IGA stores worldwide, and not all of them are called IGA, but the Elizabeth Food Bazaar is not one of them. 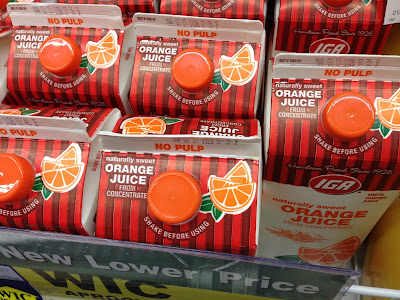 Despite this minor detail, the Elizabeth Food Bazaar has been carrying IGA brand orange juice pretty consistently for a while now. Nothing else, just orange juice. This was pretty strange to me until I realized that the same company supplies both the local IGA stores and Food Bazaar. Bozzuto's Food Distributor of Cheshire, CT supplies Food Bazaar, Retail Marketing Group (running stores as Your Local IGA), and Independent Retailers Cooperative Group (also an IGA subgroup).