Welcome to the first official post of The Market Report!

Before we see today's Look Inside, I must present this disclaimer: none of these photos are mine. They were posted on LoopNet by someone, presumably the listing broker of this building. If they are your pictures, please let me know and I will credit you as you like (or remove them if you want). I simply wanted to preserve them because things like this get more and more rare after the store has been closed for a long time.

That said...today's Look Inside is pretty cool. I came across the online listing for the former Super Xtra in Newark, NJ on LoopNet, a real estate search engine. I thought the photos were worth saving simply because so little information is available online about this store. This, in fact, was my first glimpse of the interior. 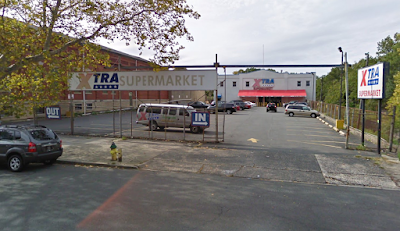 Google Maps, 2009
This was an Xtra Supermarket (not to be confused with Extra or Extra, obviously) with additional locations in Jersey City and Asbury Park, now C-Town and Super Supermarket, respectively. 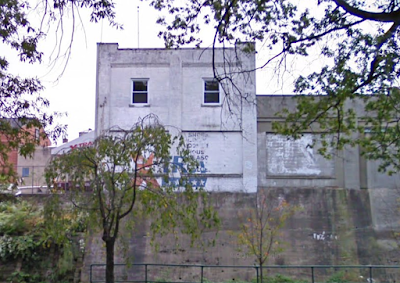 Google Maps, 2009
A Google street view shows the logo painted on the side of the building from the cross-street. This building is probably an old factory or mill that became a grocery store long ago. 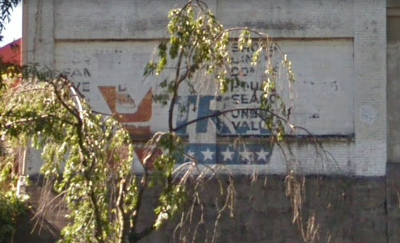 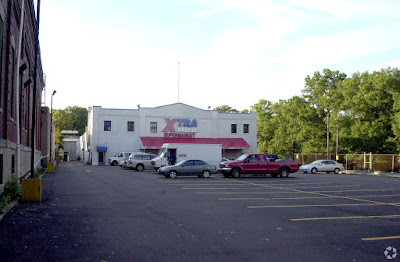 LoopNet
I don't know when this photo was taken, but it shows the store in the same condition as the 2009 street view. Some time around 2010, the exterior was renovated with a new sign. 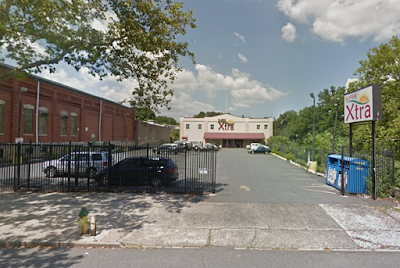 Google Maps, 2013
For whatever reason, the signage was again changed around 2016, replacing the street sign on the right with the original Xtra logo and the "Super" on the facade with the word supermarket: 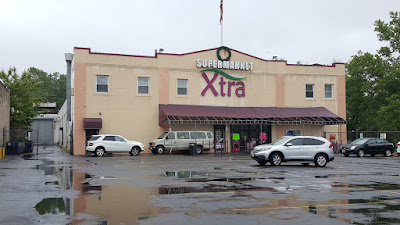 It also looks like part of the awning was torn off! The remaining photos are all from LoopNet, taken probably after the store closed in the fall of 2017. 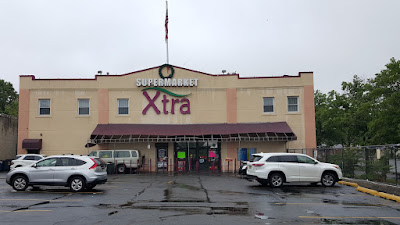 The van parked inside the posts in the front is presumably their delivery van. The way I understand this store's layout, you enter in the center and walk along the right side wall for produce in the front and seafood behind, meat/deli along back wall, frozen in the far back corner, and dairy on the left side wall. Past the checkouts, there is a restaurant/hot food area to the left of the entrance. 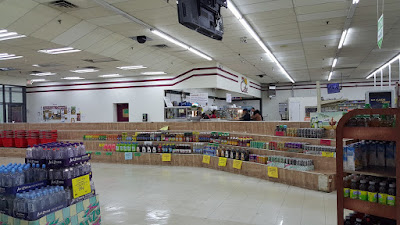 This photo was taken immediately inside the entrance (the windows are visible to the left), looking towards the side wall. Produce lines the wall behind the photographer. 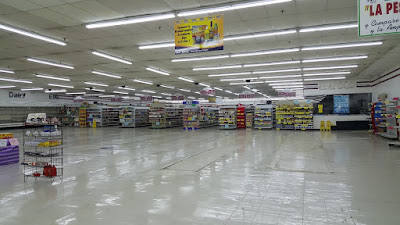 This store had quite a spacious produce department! In the store's better days, this section was probably filled with produce cases. The checkouts are to the left, and you can see the former seafood section (gotta love that neon sign) which was in the room under that panel. 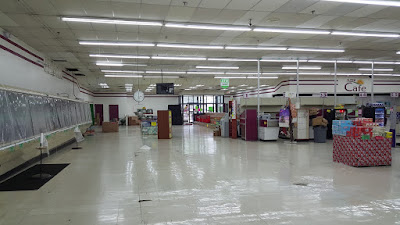 Hard to tell what the supermarket did with all the space in this store. The listing claims it's 41,000 square feet--that sounds huge, but I never was inside the store (I only saw the outside once), so I can't really tell. Former produce cases to the left. 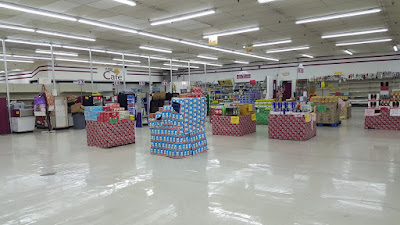 Looking across the front-end towards the former dairy department on the far wall. You might notice that the registers are closed off--even after the supermarket closed, the restaurant remained in business for a short time. This was done to prevent people from getting into the supermarket side. 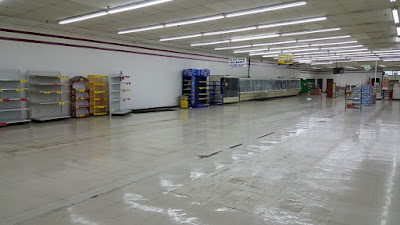 Back to the produce wall. Once again, in this condition, it's hard to tell how the store was set up when it was fully operational. 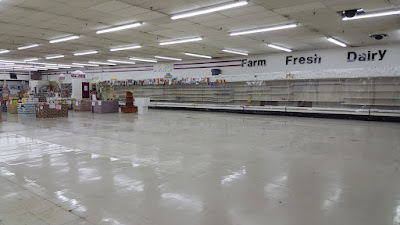 I wonder if the black lettering was brought in from another supermarket. It doesn't quite match the neon lettering (seems like it should be one or the other, not both). And theY seem to be verY unsure of how You align the letter y. 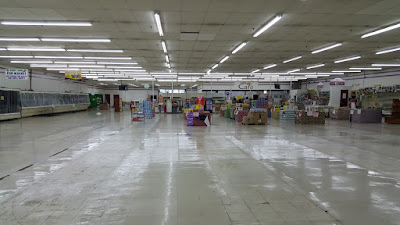 What a picture! Looking up towards the front wall from the vast concourse between the checkouts and the grocery aisles. 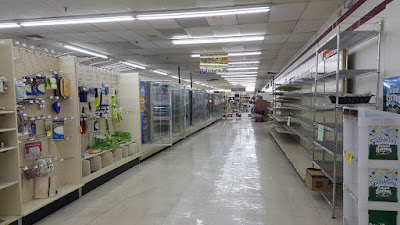 Looks like frozen foods were (at least partially) in the last aisle, on the dairy side of the store. 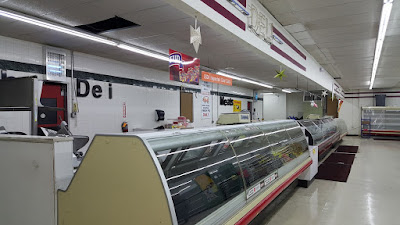 And the deli was probably along the back wall, with the butcher on the far side and packaged meats along the (produce-side) wall. And what, exactly, are USDA inspected cold cuts? The listing also included some photos of the backroom, which would probably not be this messy on a regular basis. 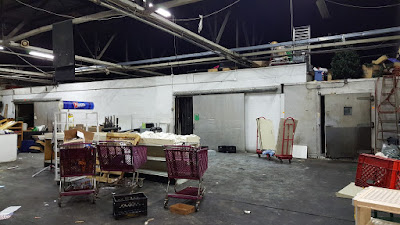 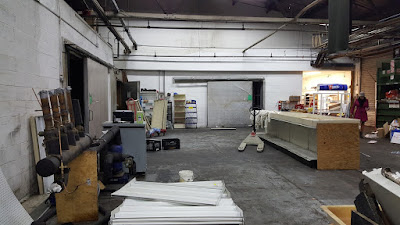 Looks like the door to the right would have led into the supermarket's sales floor. 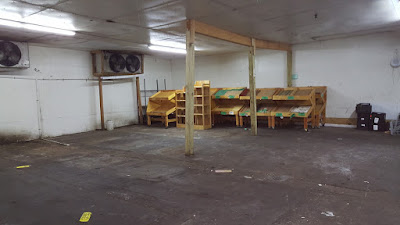 Probably a walk-in refrigerator, with some of the old produce shelving. 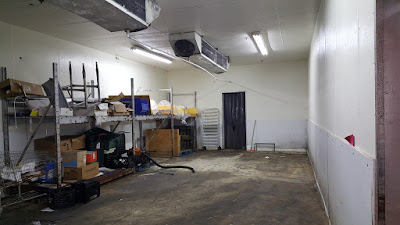 Another walk-in refrigerator? One of these has to be a freezer, right? 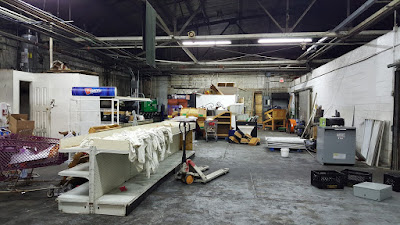 Some of the shelving, like this lower unit, was probably in that center section between grocery aisles and checkouts. 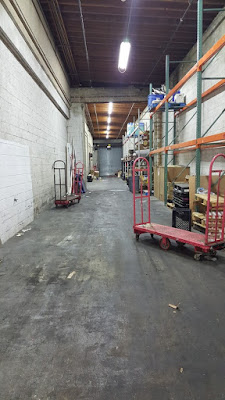 Thanks to this listing, we have a pretty complete look inside this store! I wish I had gotten to visit before it closed, but maybe someone will move in and fix it up. Know a good supermarket operator?