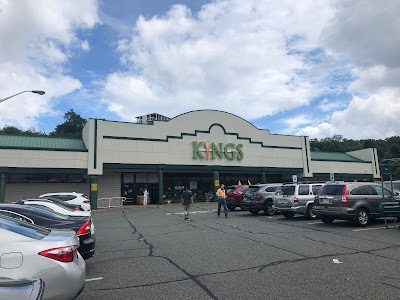 Just to the west of Montclair, which had an earlier Food Fair, is this store built as a replacement for that Food Fair as a Pantry Pride. Kings, a recently-bankrupt local chain, moved into the building in 1978 and has remodeled the space several times. At 45,000 square feet, it's one of the largest Kings locations, and it seems to be wide and shallow. You enter to the grand aisle, with deli on the front wall, bakery on the left side wall, and meat/seafood on the back wall. Floral and cheese are in islands towards the front of the grand aisle, with produce behind it. I unfortunately do not have as many photos as I wanted, because my phone just kinda didn't take some of them. But I wanted to get out fast because this was clearly not a store anyone enjoys being in -- not employees, not managers, not customers. No one was happy. That, of course, was before the ACME acquisition. Maybe I was just there on a bad day, but my return in February 2021 showed a much better experience and a very, very minimal renovation, which we'll see at the end of this tour. 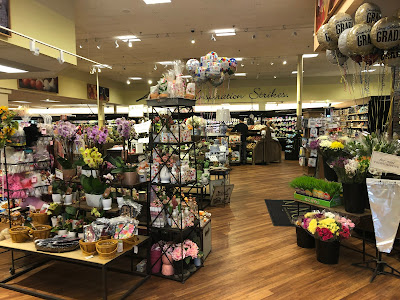 That said, the store was and is very nice. We're looking from the entrance towards the back of the grand aisle here. 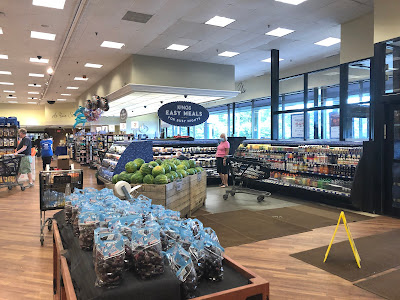 A bit of an awkward corner here along the front end that actually looks like it was being rearranged. I would've expected a cafe here, which this store does not have but many other locations do. It just felt a bit empty. You can see here that this end of the store, with aisles and registers, is only about 1/2 of the store, with the grand aisle taking up the other half. 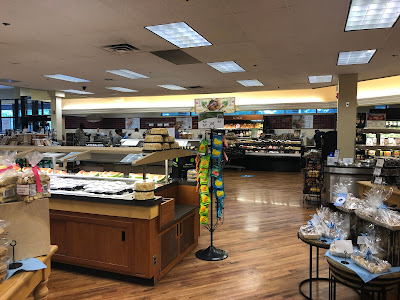 Deli on the front wall, with prepared foods in islands. Bakery runs along the side wall, but it feels like the perishables departments' selections had been cut back because there was a lot of random stock displayed in this area. 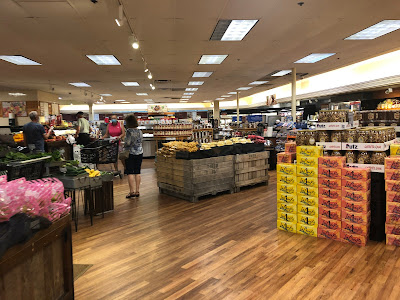 So odd, because we don't typically see big tables of pretzels in the bakery department in a store that's as busy as this one. Perhaps it's simply too large. 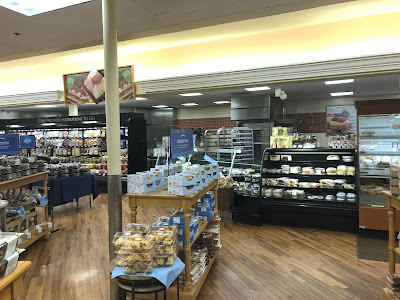 Produce takes up the back of the grand aisle. In an A&P-style layout, the department is actually a dead-end with a row of cases running along the back of the aisle which you have to walk around. 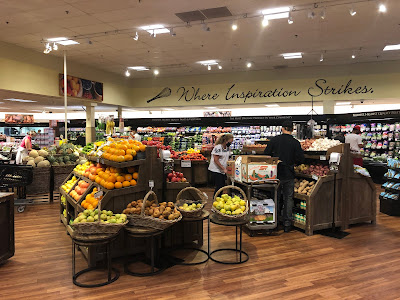 So the row of cases we're looking at here are actually along the back of the grand aisle, with the only way to get to the grocery aisles to the right, by going all the way around to the left and walking by seafood and meat on the back wall. 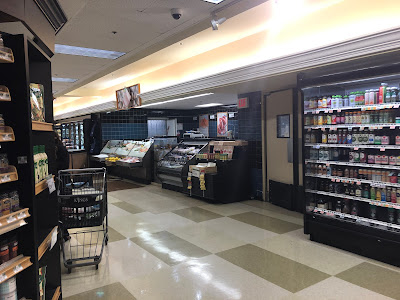 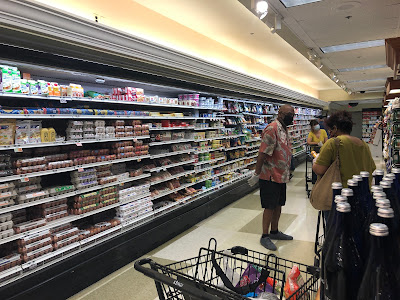 Moving into the first grocery aisle, we see some very nice category-specific merchandising... 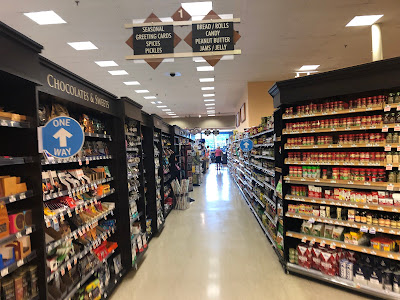 The rest of the grocery aisles look much more standard, but are nicely maintained and stocked. 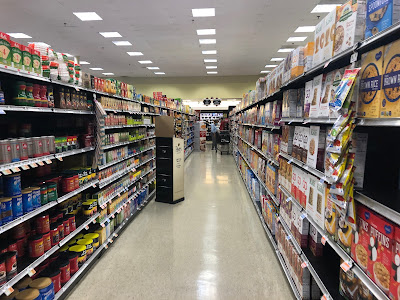 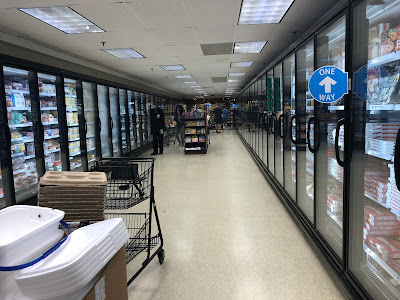 Frozen foods line the last aisle which has a much lower ceiling. The front corner is Italian foods... 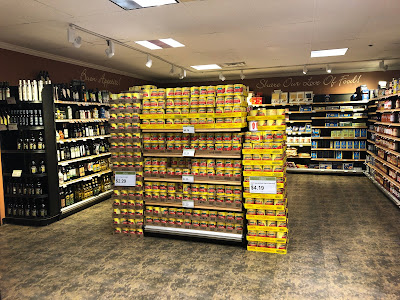 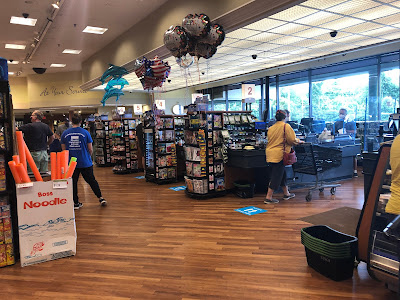 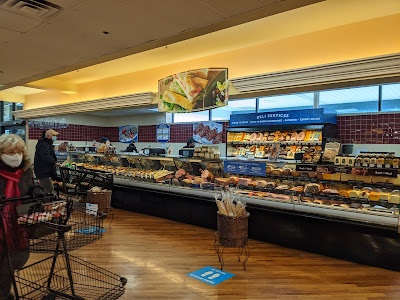 Deli on the front wall with a new image sign here, but weirdly all of the text on the walls had been removed. The blue promotional signage and its assorted flavor text is new, but the logo outside had not been updated. I'm not entirely sure, but I believe this light remodel would've happened just before the ACME takeover. 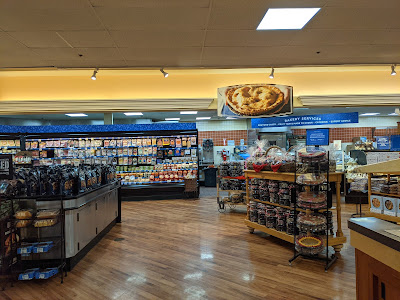 Comparing this to the pre-renovation photos, we see there was very little department text on the walls and so the removal of the few signs that were there was a minimal change. 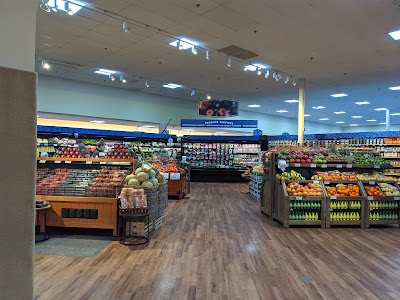 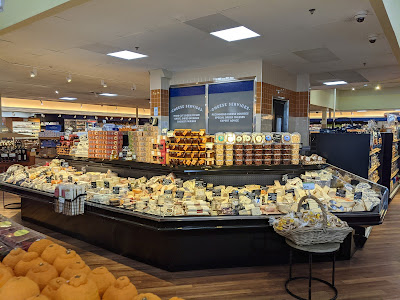 The cheese counter in front of produce, however, is looking great. 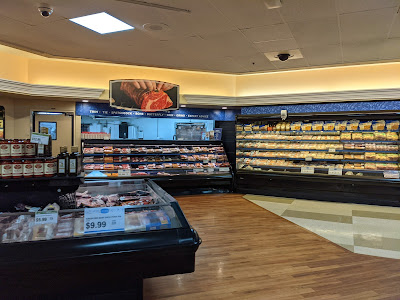 Butcher in the back corner. Unless this is in fact the very beginning of an ACME-driven remodel that has yet to have the main departmental signage installed, this is very, very strange decor. The aisles are looking clean and bright but unfortunately the new aisle markers look rather cheap... 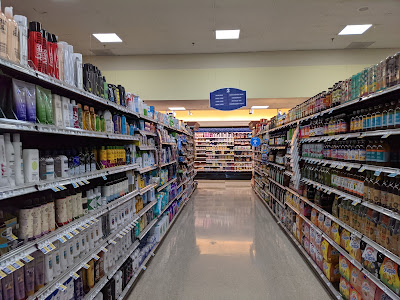 Notice that the entire back wall has no decor at all. There are some new category markers in frozen, which look pretty good. Also notice, though, that the Italian department in the front corner of the store has been walled off, I'm not entirely sure what for. I assume those items were just moved over into the grocery aisles. 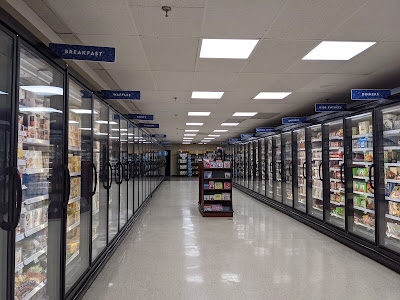 Now we're going to jump out west to Fairfield, which is about 5 miles northwest. We'll then come back along Bloomfield Avenue, or route 506, back out through the Caldwells, Verona again, and then into Montclair. Head over to The Independent Edition tomorrow for a new tour!