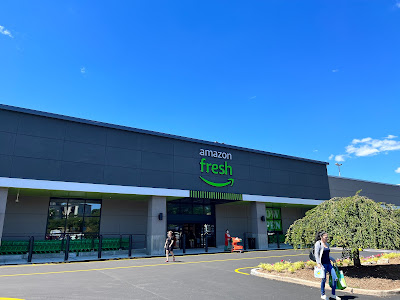 It's time for The Market Report to visit an Amazon Fresh! The rapidly growing chain currently has approximately 40 locations, and their first New Jersey store is in a roughly 50,000 square foot former Fairway Market, which they purchased in the 2020 Fairway bankruptcy. While Amazon is of course enormous and powerful, and runs a strong grocery operation for both delivery (Amazon Fresh/Prime) and in-store shopping (Whole Foods), it seems the latest Amazon stores bring together all of the weak points of both with few of the strong points. 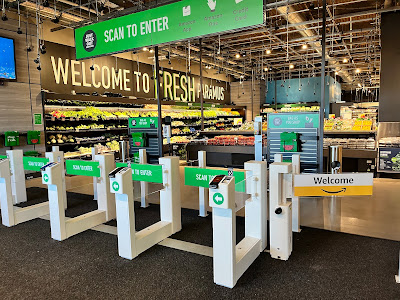 But it is Amazon we're talking about here, so the store is extremely high-tech. If you haven't seen an Amazon Fresh store yet, the store focuses on the "Just Walk Out" shopping. You scan your app at the entrance here, then you can shop normally but walk out of the store without paying at the traditional registers. Instead, it is deducted from your Amazon account. The many cameras and sensors on the ceiling are designed to register what you pick up, and items are sold individually rather than by weight. I'm not entirely sure how that would work with things like meat and seafood or deli items from the counter, though. 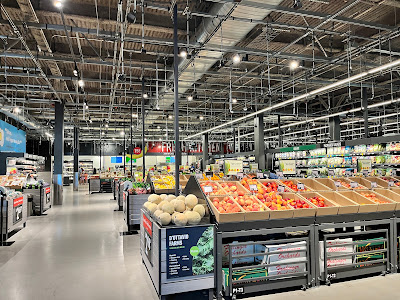 The store is quite beautiful in design and very sleek, with the modern look throughout. It's not the most exciting decor-wise, but it's very attractive. Produce and cold cuts are here in the first aisle, with deli/bakery, meat/seafood, and some dairy on the back wall. Refrigerated grab-and-go drinks are in the first aisle, with dairy and frozen on the far right side. That corner also has an Amazon department, as we'll see, along with a cafe. 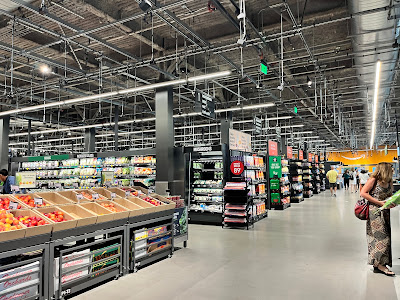 Unfortunately, despite the sleek appearance, it's obvious the store is being poorly run. This was my second Amazon Fresh (I visited one in Pennsylvania, which we'll tour soon). I was expecting a nearly seamless, high-tech experience from Amazon but it's obvious they're not naturals at brick-and-mortar retail, and they don't exactly seem to be trying too hard, either. 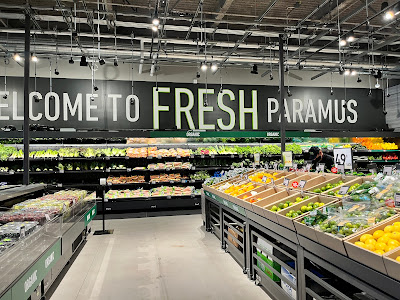 There are certainly interesting features, such as the fact that all of the price tags are digital and therefore able to be changed remotely at any time. But at the end of the day, if we remove all of the fancy technology, it's a subpar grocery store. Not to mention prices actually seemed pretty high on most things. In the above picture, we can see that little to no focus is being put on stocking the shelves as it would be in most supermarkets -- look at all that space in the coolers, and how large the section dedicated to carrots is. 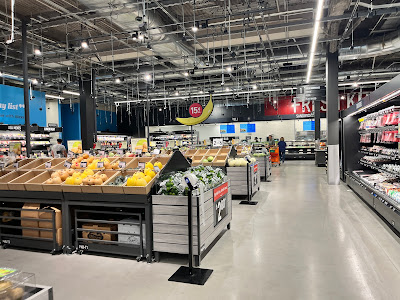 The rest of the produce department is similarly unremarkable, with not particularly great prices, freshness, or selection. Speaking of selection, there's category signage for various types of produce, the actual food for which was either missing or elsewhere. Here's a bin labeled with information about how to store tomatoes, stocked with... apples. 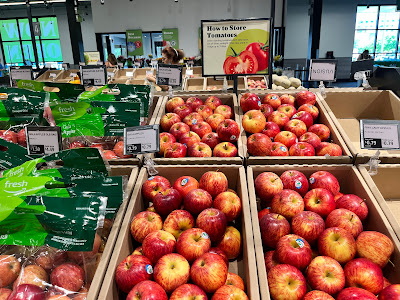 And this helpful sign showing us how to choose mangos? Apples. And look at the bins behind this shelf. All empty. 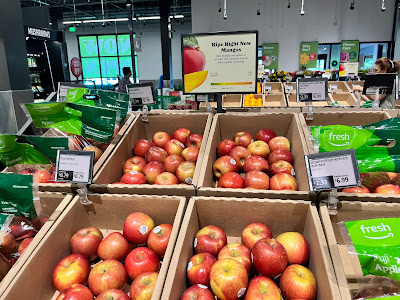 Things don't get much better as we move on to cold cuts and dairy, which is sparsely stocked as well. If I saw this type of stocking in any other supermarket like ShopRite or ACME, I'd assume either there was something wrong with the case or they were having trouble getting the stock in, or that the store was really struggling. With a brand-new store like this, it's unlikely it's any of the above. 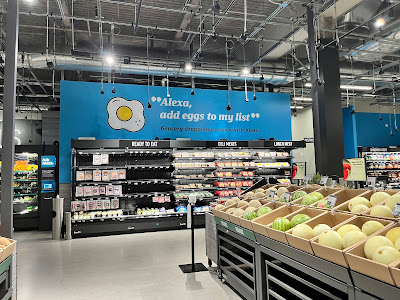 As we look across the back wall of the store, we have deli/prepared foods, bakery, and meat/seafood. Again, this area looks quite nice until we get up close... 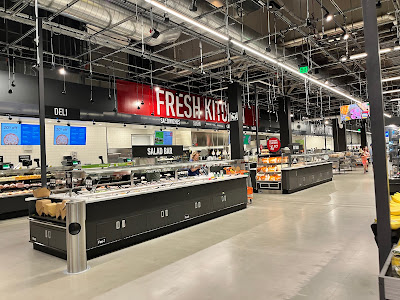 ...and see that the meat case is stocked with only a few trays of Italian sausage, which I believe was also sold packaged nearby. The seafood case had only a few types of fish. 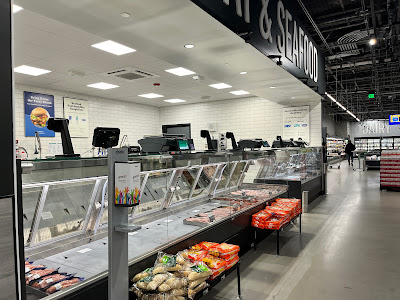 And things aren't much better in the bakery. First of all, it doesn't look like there's a true bakery here, which is fine although a little disappointing. But second, there's hardly any selection here. Look how much of that one type of bread is filling the case to the left. 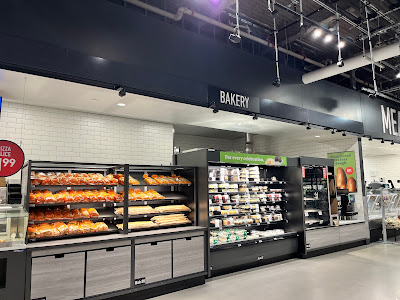 And as for single-serve rolls, bagels, and pastries, for which Fairway was famous? Nothing at all... 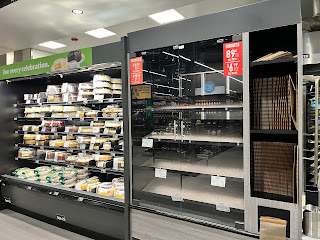 There's really just not an excuse for that, or at least no other traditional supermarket operator would be okay with that. The grocery aisles do seem to be a little better stocked, but the selection (for a pretty large store) was very small. 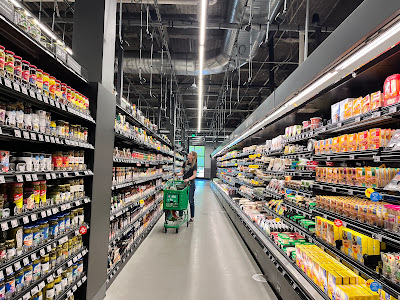 And the pricing was high -- not just higher than other competitors, but on some items, higher than what you might find when ordering online. It all seems like a strange strategy to enter a brand-new market with (this is Amazon Fresh's first store in New Jersey, so if I were them I'd be going all-out to make a great first impression). 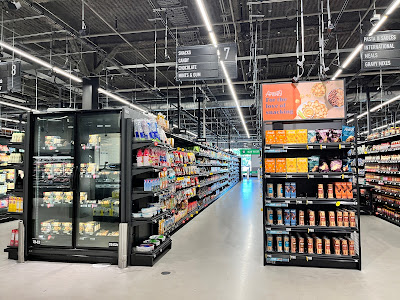 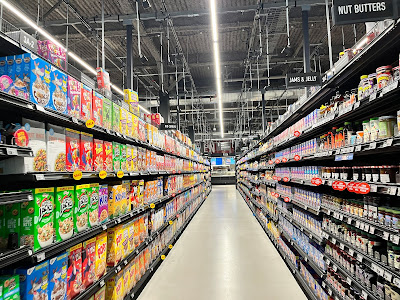 But to their credit, the whole store is clean and pretty well-organized, so it doesn't feel hectic beyond the lack of stock in most departments. 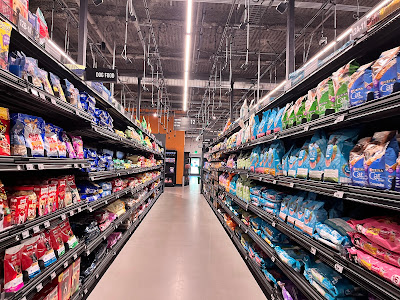 I looked for the cat products I normally buy and had a hard time finding them or a reasonable substitution. What they did have was very noticeably higher-priced than competitors like ShopRite, Foodtown, or ACME. 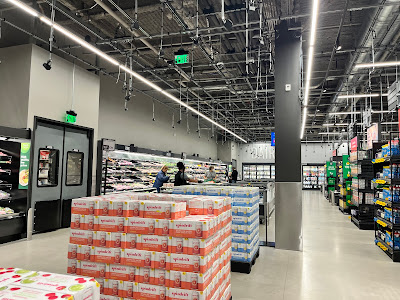 In the back we move on to packaged meats and dairy. Opposite that department is the frozen foods department... 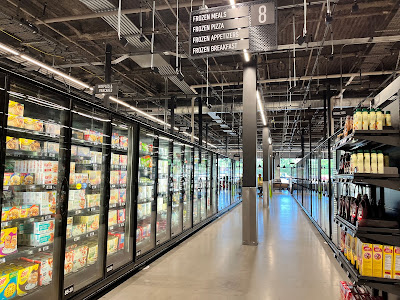 The store looks fantastic with its dark fixtures, exposed ceilings, brand-new equipment, and polished concrete floors, but it's just not a supermarket I see myself ever wanting to actually shop in. 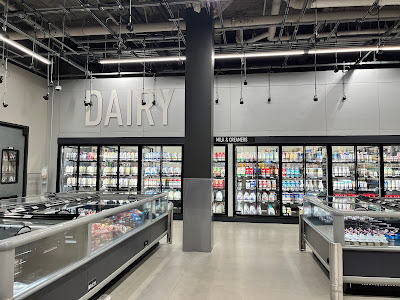 Dairy in the back corner, which extends down the last aisle also... 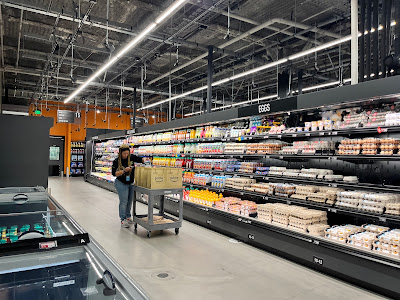 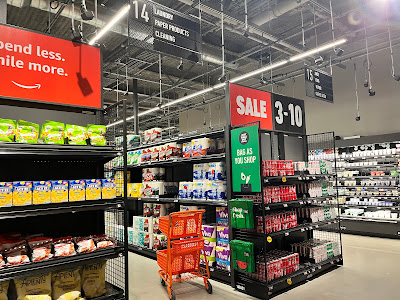 Even on the endcaps compared to what we see in other supermarkets, the stock is strangely low. And a wall of sale items in the front corner here feels more like what we might see in front of a closed pharmacy department rather than an intentional sale display... 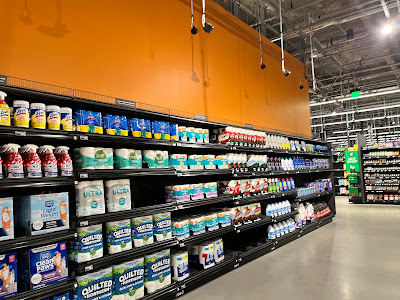 Around the corner from that is the Amazon department, for lack of a better descriptor. There's a counter for Amazon customer service, several popular Amazon products, and some devices on display. 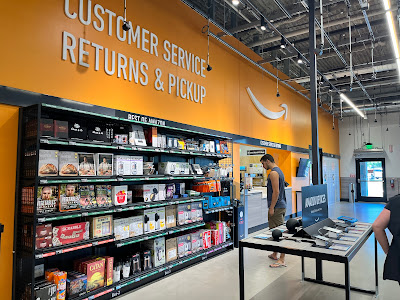 Opposite that is the cafe, which feels honestly cold and uncomfortable compared to the one I ate at in Pennsylvania (more on that soon). 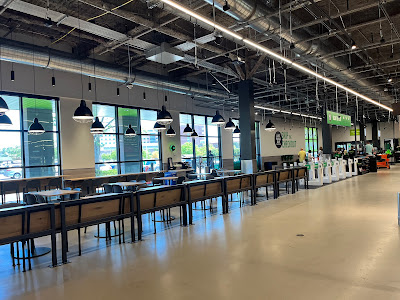 The front end is, of course, complete with both the Amazon-linked checkout and the traditional checkout (apparently you can scan your palm to pay now, which I most likely will not be doing anytime soon...). Again, high-tech, but is it really necessary? And is it worth paying more for a smaller selection here just to experience the faster checkout? 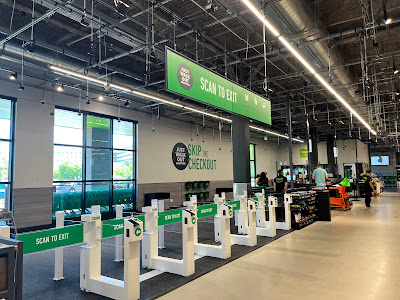 So I can't say I love the new Amazon Fresh here in Paramus, although I wouldn't say it's a total failure of a store or of a concept. It just needs a lot more refining, refining I had hoped would've been done in the two years Amazon has been using the Fresh concept. (For Amazon, I would think two years is an eternity, and time they could use to get done whatever they wanted.) I see similar complaints to mine at Amazon Fresh stores nationwide, and they've halted expansion in the UK, so I do wonder what the format's long-term longevity is. To be clear: if Amazon decides they want to make it work, they will, no question. It's just a question of how much time, effort, and money Amazon wants to put into their physical retail program. Tomorrow, we have another Amazon-owned store not too far away in another Special Report here on The Market Report!