We're heading out to Dover, NJ, in Morris County. The area becomes more and more rural as you head west, but Dover is a fairly large town or small city. It's also a straight shot from NYC on Route 80 about an hour. 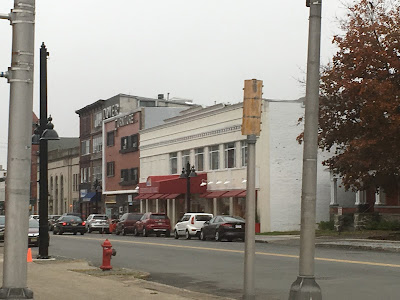 In downtown Dover is this building, home to a Bravo Supermarket on the first floor. (Bravo is part of White Plains, NY-based Krasdale Foods, which also runs C-Town Supermarkets.) Dover is also home to a former Acme and a former Food Fair in the same strip. Check out Acme Style's coverage here. 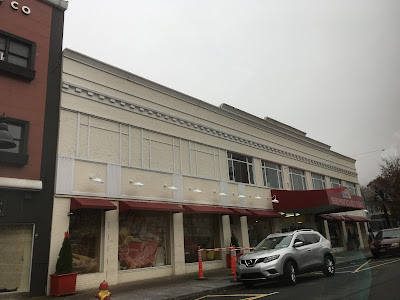 It would not surprise me if this were a former department store. It has that look. 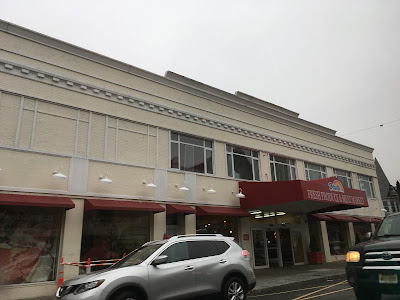 Dover's downtown struggled when shopping centers opened in nearby Rockaway, causing many of the chain stores to leave. It has recently been revitalized as a center for the Hispanic population of Morris County, explaining the presence of Bravo. 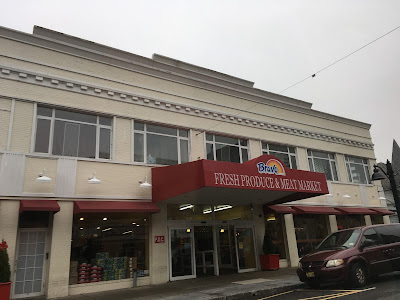 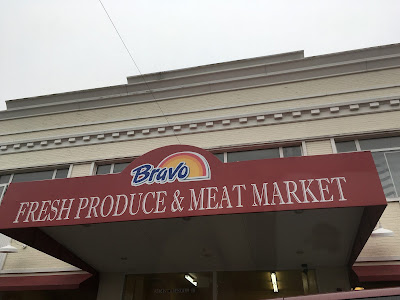 This store has parking in the rear, and entrances/exits on both sides. There are registers in the front and the back. 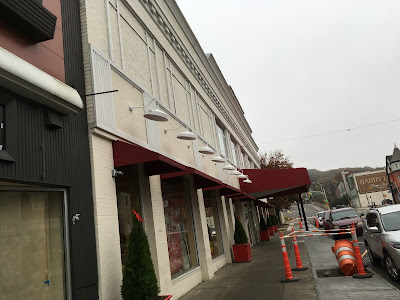 Entering on the front, we first hit the deli/bakery/café in the front right corner. Produce lines the first aisle, with customer service on the back wall. Frozen foods and dairy are on the left wall. There are two registers in the front, and maybe 3-4 in the back. 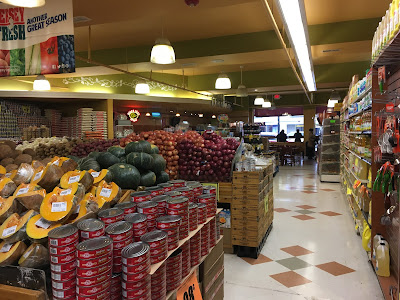 Here we're looking up towards the front/street entrance, with the food court up by the windows. The deli is under the curved ceiling to the left. 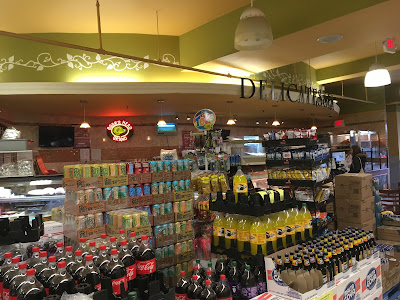 Closeup of the deli. This store had a surprisingly large hot food/seating area for a small urban market. The decor is really nice, with very tasteful graphics and lighting. This section looks great, although the whole store is not maintained this well. 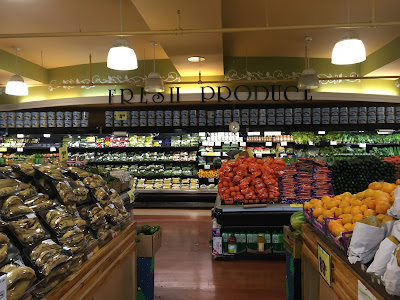 Large and attractive fresh produce department, and the prices were pretty good for most. 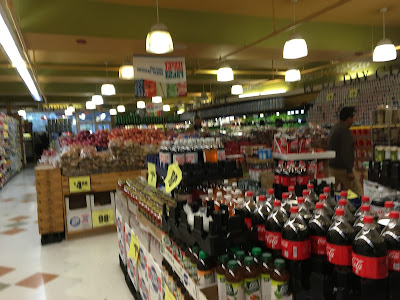 Blurry overview of the produce department, looking towards the back wall/entrance. The grocery aisles are pretty standard, but well-stocked with a good selection for a small store. 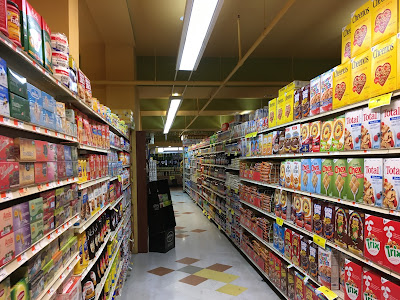 The details in the ceiling are a nice touch, but the floor could use some help. I'm not sure I love the random yellow patching. 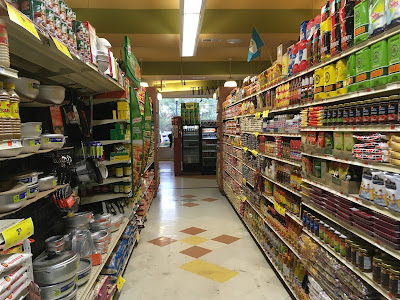 As you would expect, there's a substantial international selection. Plus more yellow patching. 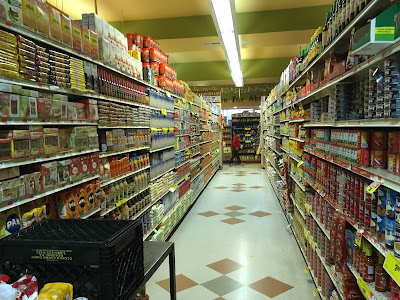 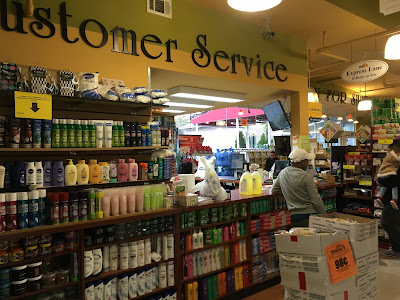 Customer service is along the back wall, where the selection of HABA is. 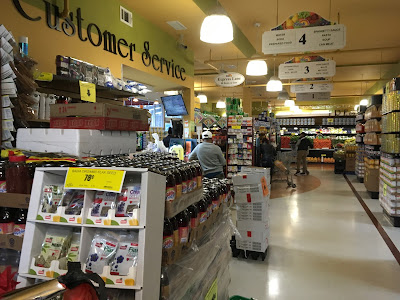 Looking back towards produce from customer service along the back wall. 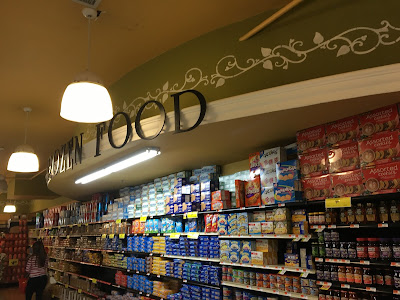 Frozen foods (which are, of course, not under the Frozen Food sign) run along one of the grocery aisles, before what was presumably an expansion--the store continues on the other side of this wall. 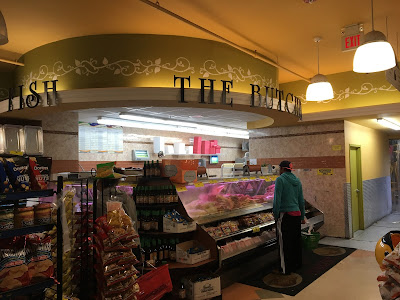 Butcher is in the back corner opposite the produce aisle. Unfortunately I'm drawing a blank on where packaged meats are. The fixtures here are all new, and they're really nice. The decor is also very upscale (although the store isn't, necessarily). 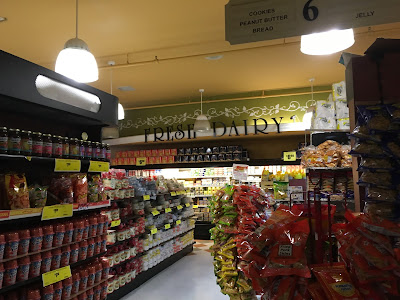 Dairy runs along the last aisle, which is the side wall of the store opposite produce. Some of their lights are having problems here. Although most of the store is really nice, it kind of falls apart in the last aisle. The fixtures are much older and the decor, while still attractive, is not as well-maintained. 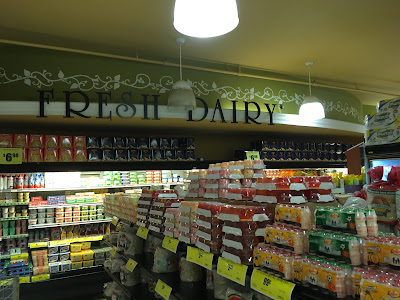 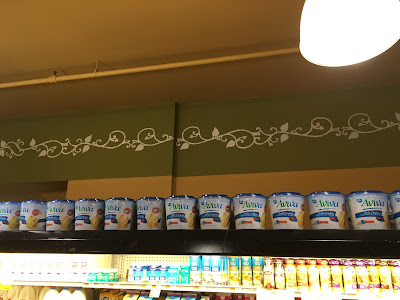 The vine pattern still is really nice. It's something we've seen before (Supremo Allentown and others) and will see again, in another Bravo. 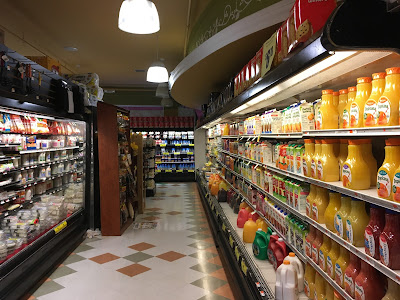 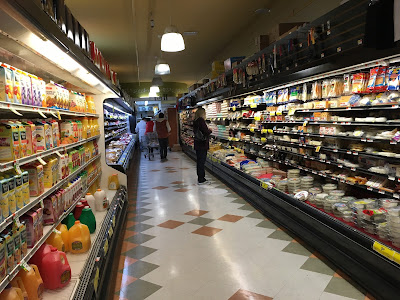 The last two shots are the last aisle. Dairy continues into a little alcove in the front corner. 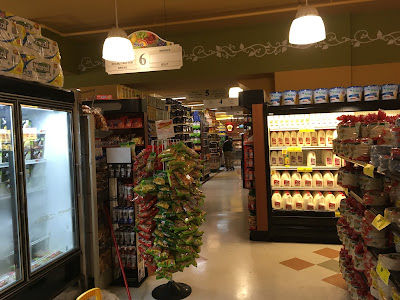 Looking from the alcove along the front wall of the store. 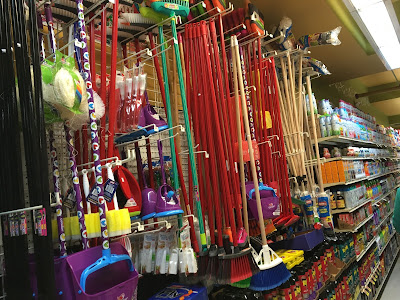 Quick detour to one of the grocery aisles for a random--but huge--selection of brooms, dustpans, and other home goods. 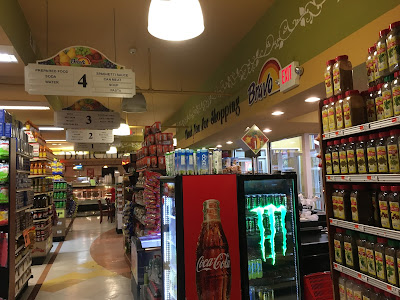 That's about it for our tour. But wait! What's that I see on the left? 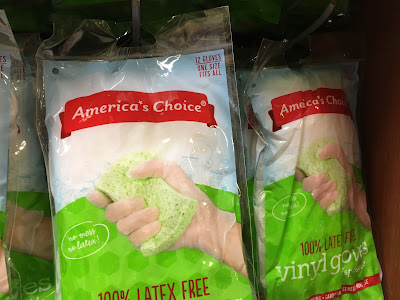 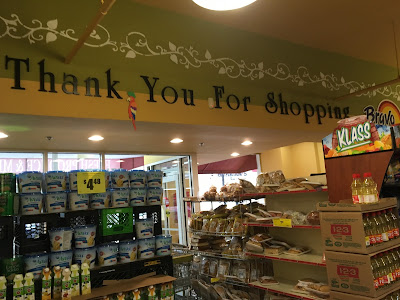 One of the registers is blocked off with old milk crates--uh, I mean shelving, I guess--along the front wall, so there's only one functioning register in the front. I guess most people use the back door. 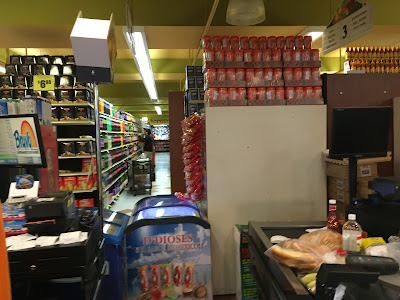 Looks like that other register isn't ever used, and hasn't been for a long time. 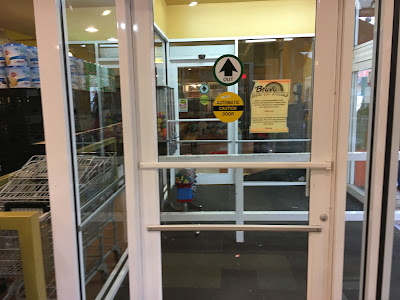 As we head out, you can see the small foyer that the entrance/exit share. Straight ahead is the seating area, immediately inside the entrance. 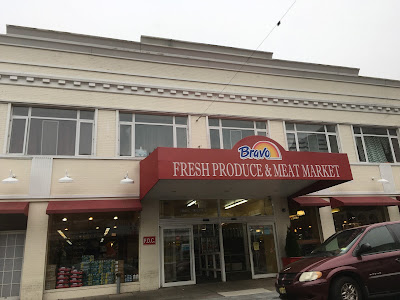 Bravo in Dover is really nice, and a great thing to have in downtown Dover, but I just wish it were slightly better maintained. Anyway, this store got me hooked on Krasdale hot sauce--$0.89 for the 6 oz bottle!