We're heading back to the SuperFresh Food World of Bloomfield more than two years after the last visit, checking out the newly-renovated storefront.
New monument sign has been installed in place of the old A&P sign. It makes the first impression much more upscale, as does the facade renovation.
The supermarket shares its building with a Walgreens pharmacy, as it was originally built as a Stop & Shop / Medimart combination.
Inside, the store is largely unchanged, with a few minor adjustments, such as the addition of a salad and olive bar at the deli. The selection is very wide for a 33,000 square foot store, focusing on international foods from eastern Asia, the Philippines (not the Philiphins), eastern and southern Europe, the Caribbean, and Central and South America. Don't believe me? Go shop there. 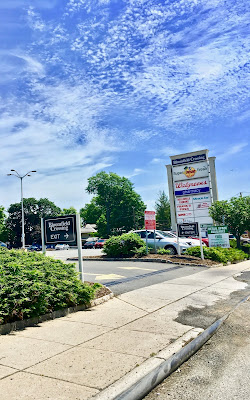