We're back again in Elizabeth, NJ for a look at another brand-new supermarket. This one, B-Town Market Fresh (not sure what the B stands for), is affiliated with Allegiance Retail Services and therefore uses the Foodtown circular and storebrand. 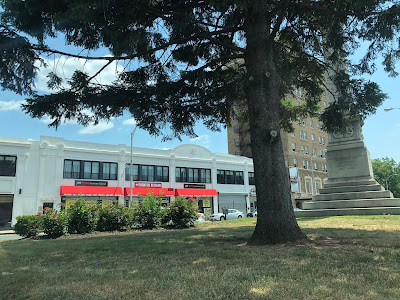 This store, which is located in the North Elizabeth section, is the first new supermarket to open in Elizabeth since the embarrassment known as Supermarkets Plus (which was, however, beautiful to begin with). Unlike Supermarkets Plus, however, this store's owner has not had three of their stores "mysteriously" burn down. 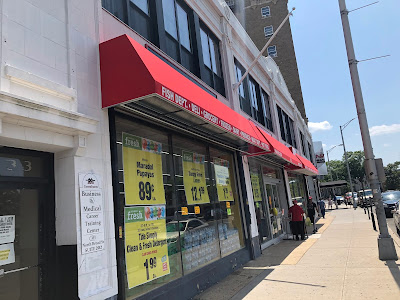 The B-Town Market Fresh joins three existing Market Fresh locations in the Hudson Valley of New York, which you can see on their website. I don't think they share an owner, though, as the owner was actually in-store on my visit. This 22,000-square-foot store is in a promising location -- a vibrant neighborhood consisting primarily of Latino and Haitian immigrants -- and has a beautiful facility. 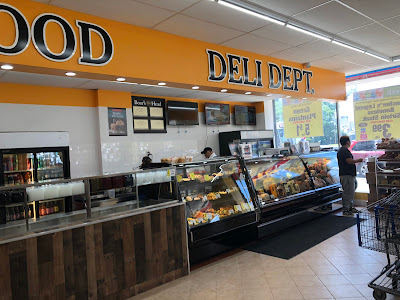 You enter to the deli/hot food area on the right side of the store. It looks like hot food either isn't ready to go yet, or isn't open on weekends. The rest of the supermarket continues behind this area (behind me in the above picture), with produce in the first aisle. Meat and seafood line the back wall, with dairy and frozen in the last aisle. Customer service is opposite the deli on the front wall. 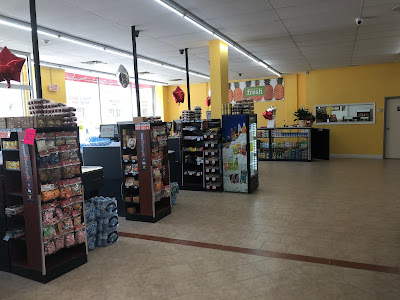 Here's a look across the very spacious and bright front-end. This building was previously several smaller storefronts, so the layout is a little awkward in the front. 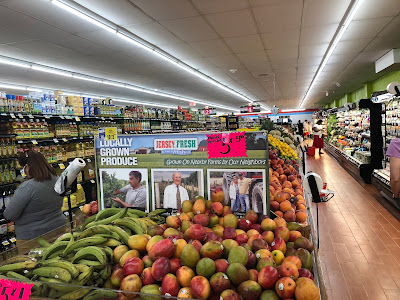 The produce department continues behind the deli. And while this may not be the best place to mention it, there was an impressive selection of NJ locally grown produce, including berries, greens, and corn. I doubt the mangos or plantains are locally grown. 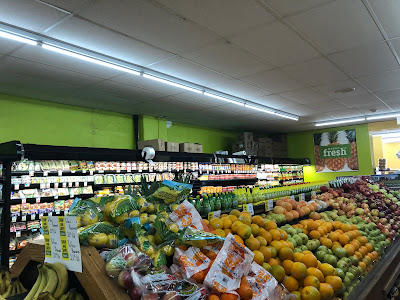 Looking up towards the front of the store. 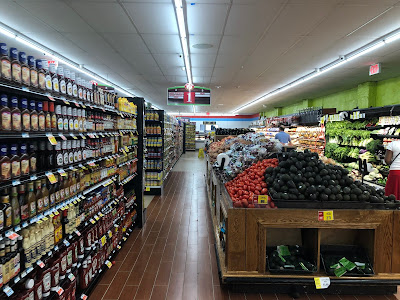 The facing aisle has packaged goods, while the outside wall has meat in the back and produce in the front. 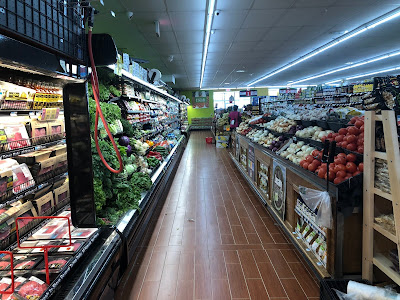 Here you can see the front end with the windows ahead. 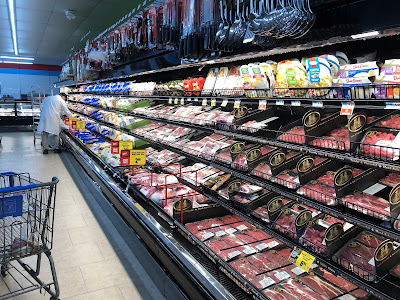 Packaged meats line the back half of the first aisle, with service butcher along the back wall. 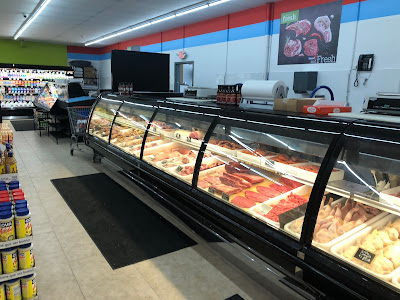 A look at the butcher and seafood counter (on the far side) along the back wall. I wish they'd stuck with the green and yellow color scheme here instead of red, white, and blue. It looks much older than it is. Although I do like the signs along the back wall. 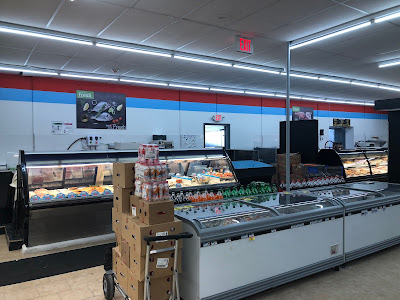 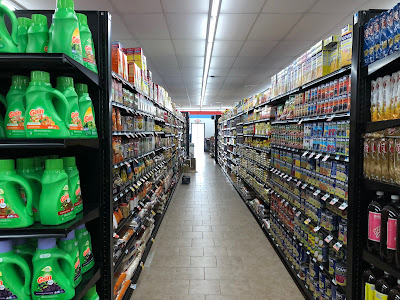 Like many supermarkets that are deeper than they are wide, Market Fresh's aisles are divided into two sections. We're looking from the center aisle towards the back of the store. 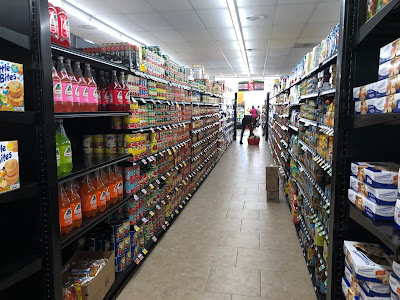 ...and the same aisle, looking towards the front of the store. 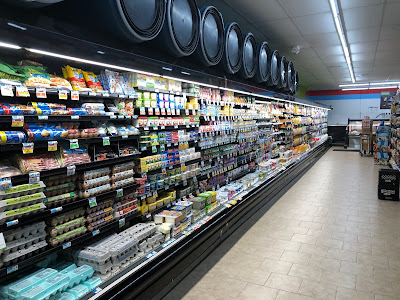 The back of the last aisle contains the dairy section, while the front half of the aisle has freezer cases. 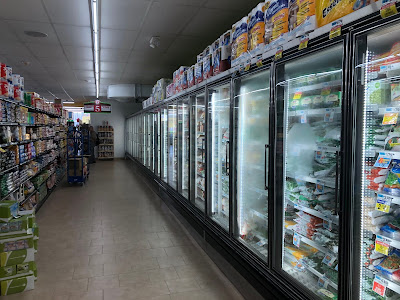 Five aisles in total including the produce/meat aisle, but because they're doubled up, it's actually more like ten. 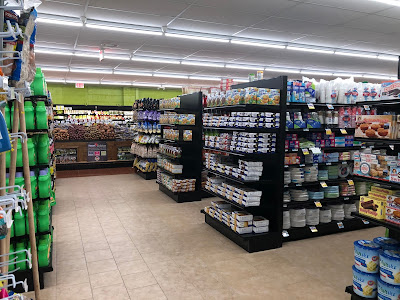 Here's a look across the middle of the store back towards the produce aisle. 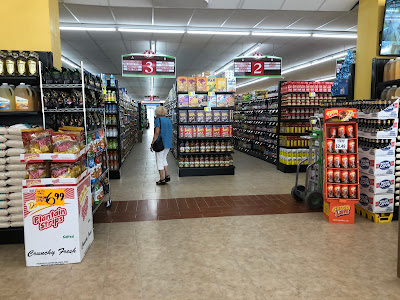 In the front section of the store where the checkouts are, looking back towards the grocery aisles. 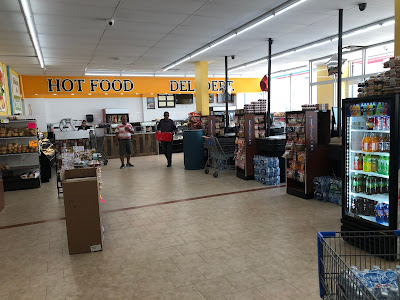 Here's a look back across the front-end.

Market Fresh opened 07/06/18 but with very little publicity. They weren't even on Google Maps until well after that. And finally, the location is now listed on the Market Fresh website. Hopefully the word gets out.

A note about parking -- the store advertises free parking in rear on the storefront, although I had trouble finding the lot. There's a few different lots, although the only one that wasn't locked up had a big NO PARKING ANY TIME sign on the fence. The owner told me that that lot is actually open for Market Fresh (although I'd still be hesitant to park there until there's a clearer sign), but she also said that Market Fresh will have its own private lot on the side in the future. For now, you're best off with street parking, which is not hard to find in the neighborhood.