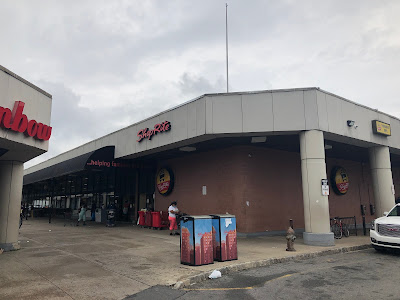 In busy downtown locations, it's now the hot trend to construct a mixed-use development, with retail on the ground floor and offices or residences above. But back in the 1980s, developers thought it would just be fine and dandy to plop a giant suburban-style strip mall in the middle of an urban downtown. Having been in East Orange since the early 1950s, Village Super Market (whose original location was just over in South Orange) was a natural choice to open a 56,000 square foot ShopRite anchoring the plaza at the Brick Church train station. By 2019, it was announced that the complex was to be demolished for... you guessed it... a mixed use development. The new development is slated to include a supermarket with a smaller footprint, but it's unclear whether Village will remain in the location. Village has also been rumored to be interested in the Orange Memorial Hospital site three quarters of a mile to the west. 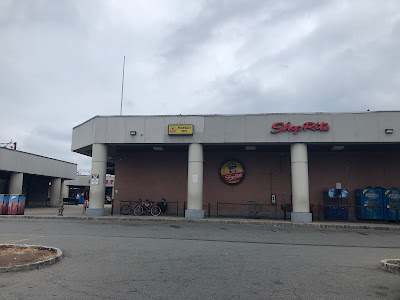 Either way, this store isn't long for this world. As much as I love the classic decor we're going to see inside, which actually looks like it's much older than 1987, it's time for a replacement. The layout is pretty standard for Village stores, with the grand aisle on the right-hand side of the store. Produce lines the left side of the grand aisle with seafood, deli, and bakery along the right side. Meat lines the back wall with frozen and dairy at the far left side of the store. Pharmacy is in the front left corner. Let's head in! 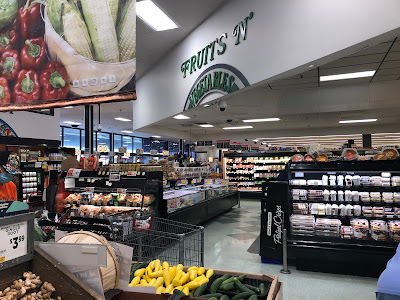 The store was refreshed in 2015, and seems to have gotten a few small upgrades over the years but has not had a full renovation since it opened. The walls used to be beige, but they're all white now. The produce cases were replaced in 2015 as well, with some other small upgrades. 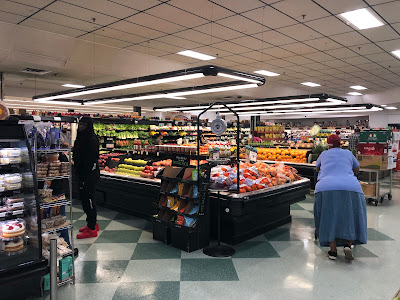 Very cool 1980s look with the tube lighting here. Seafood, oddly enough, is in the front corner, which does not exactly make for a pleasant smell when you walk in. Most other Village stores have bakery in that location. 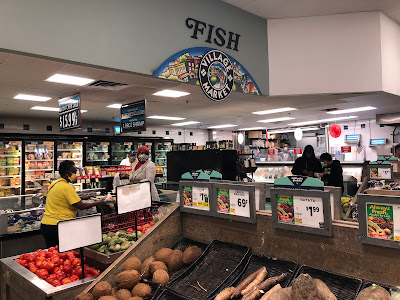 This would've originally been a beige wall with just the "fish" lettering (perhaps that's part of a longer sign, such as Fish Market, which had been cut back). The Village Market signage was added later. 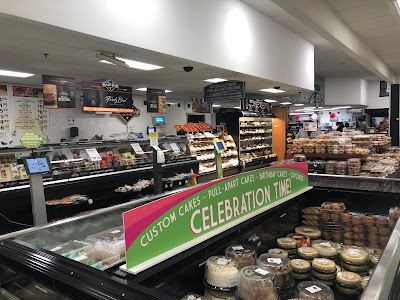 Though the refresh brought some much-needed updates to the store, it left many walls totally decor-free. It makes for a bit of a bland experience. 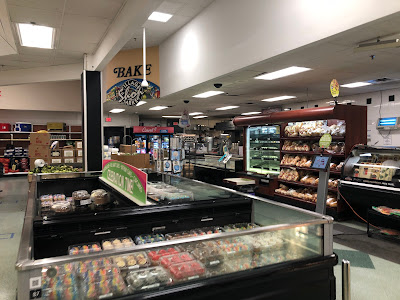 The Village Market "Shop" sign is probably secondhand from a renovated store. Very small bakery for such a large store. 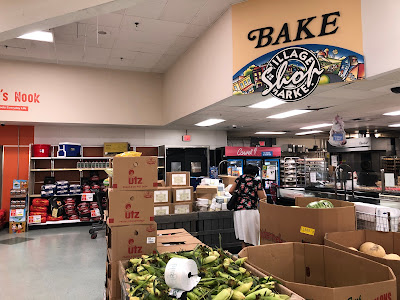 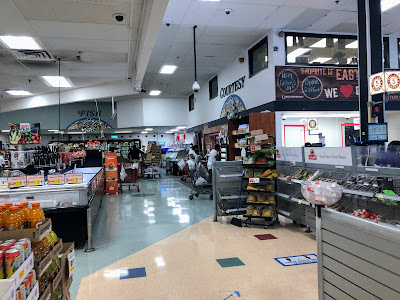 Village would get more creative with their department names in later decor packages. FISH. COURTESY. BAKE (shop). But we do see some more decor still left on the back wall... 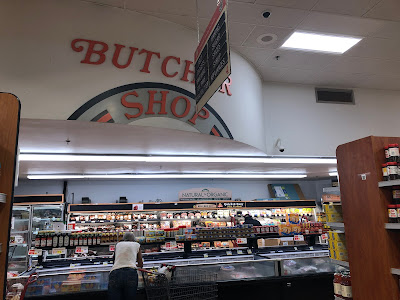 No service butcher here, but we have a nice rounded wall feature for our butcher shop sign. 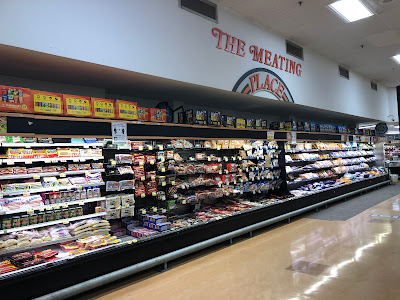 The Meating Place! I love it! 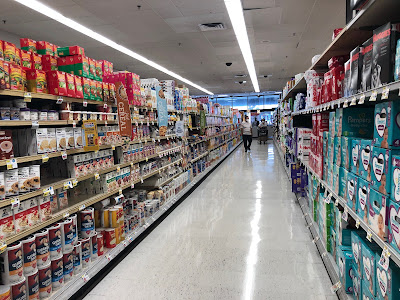 If nothing else, the grocery aisles are clean and bright. 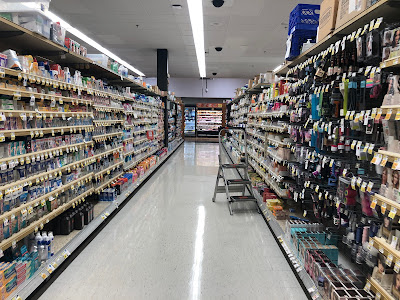 A reset done at some point after 2015 has moved health and beauty items into the grocery aisles from the front corner where the pharmacy department is. That section has been reset to sale items. It feels like that must've pretty significantly cut back the grocery selection, which is odd since this store is so high-volume. 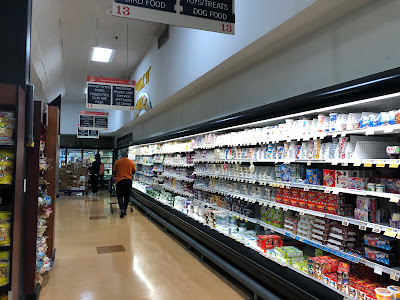 Dairy begins on the back wall, with the rest along the outside of the last aisle. 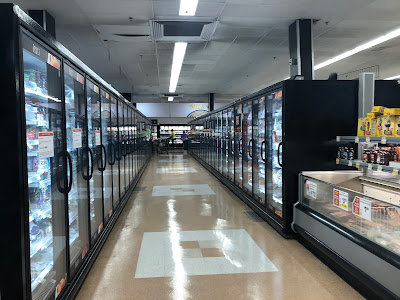 Frozen foods take up the second- and third-to-last aisles. Interesting floor colors here, but you can see they've been resurfaced. 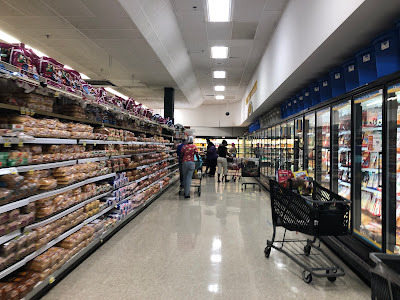 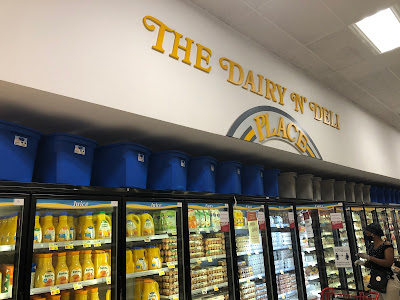 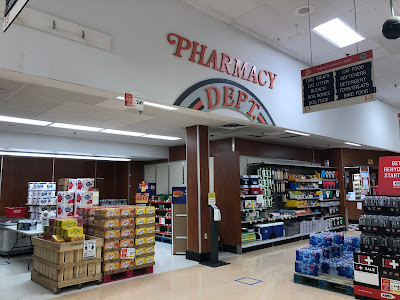 Pharmacy in front corner of the store on the front end. This whole area used to be enclosed, and it was converted to nonfoods and sale items during the later reset. 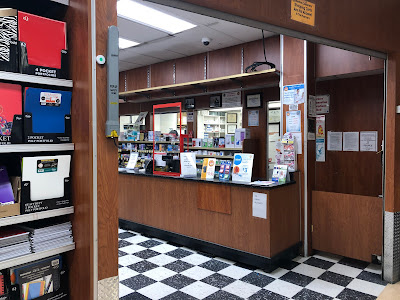 The actual pharmacy counter is around the corner set off from the main store. This whole section used to have checkerboard floor tiles. The front end continues along the rest of the front wall. 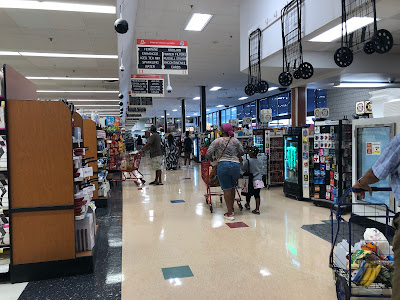 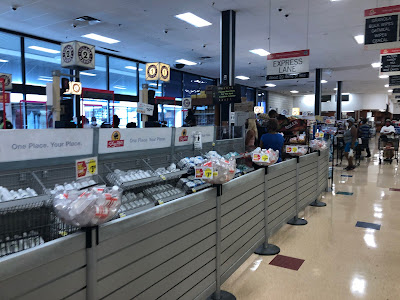 This was one of the three first Village stores to get this single-line express checkout setup. Livingston and Essex Green were the other two, both in this immediate area. In those, the express registers were more recently replaced with self checkouts in the same configuration; that hasn't happened here I'd assume because it doesn't make sense to install new fixtures in a store that's expected to be closing by the end of the year. That wraps up our tour of this store, which is currently the only ShopRite in East Orange. There was previously one on Central Ave, which replaced an older Central Ave store, and there was also one on Main Street which also probably replaced an older Village location. We'll be taking a look over at that one too, but we'll be looking at a natural food store across the street tomorrow on The Independent Edition!