We are returning to the former Compare Foods in Worcester, MA for today's tour! We first saw the store back in November 2017 in a Snapshot of the outside of the store. 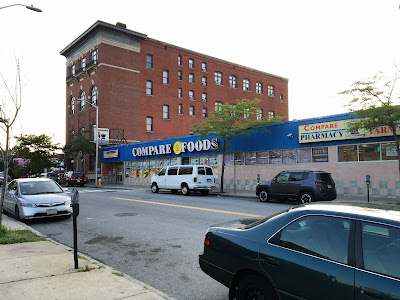 This photo was originally from my visit in July 2017, so it's been a while! The slightly off-model Compare Foods logo, the 1950s-inspired clip art on the sign over the entrance, and the fact that the photos in the windows are actually photos of this very store, all combine to make the exterior...less than spectacular. However, at least two of those have been changed! 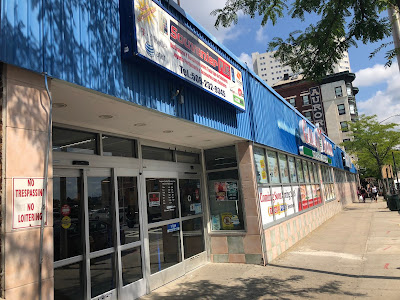 I happened to visit soon after the Gala Foods logo went up, in August 2018. A new Gala Foods sign had been placed where the Compare Foods sign used to be, and some of the photos in the windows had been covered by a banner advertising the coming of Gala Foods. 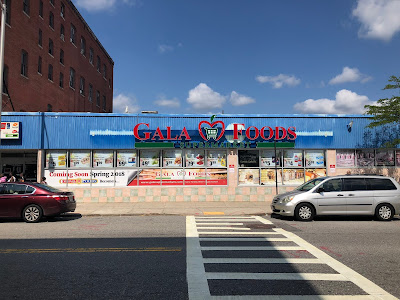 You can see the outline of where the Compare logo used to be. When I returned a few days later, the facade had begun to be painted, although the part immediately around the logo was not painted yet. 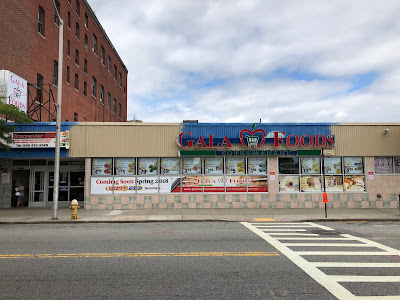 You can also see the much cleaner and newer-looking Gala Foods sign to the left in the above photo. (Since these photos were taken, the entire facade has been painted beige.) 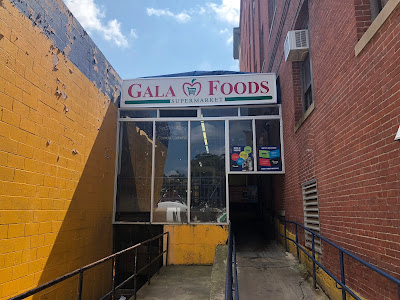 Around back, the store's signage has been fully switched to Gala Foods, although the building is still painted yellow and blue. 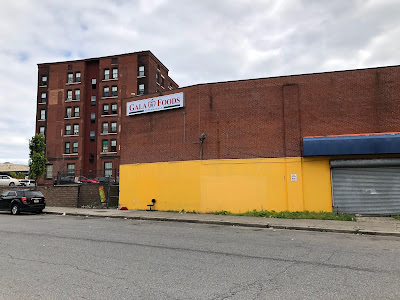 Now, what I had loved so much about this store was its tres leches cake. I am happy to report that the switch to Gala Foods has not changed the bakery! 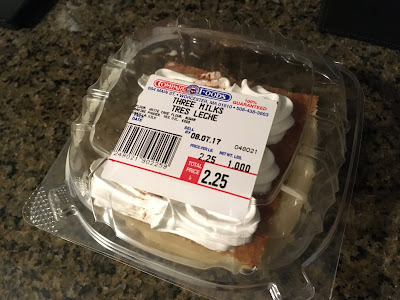 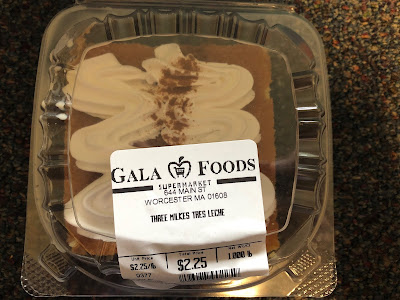 Gala Foods' tres leches. We have gotten an extra "e" in "Three Milkes," though! Now let's head into the store through the front entrance. 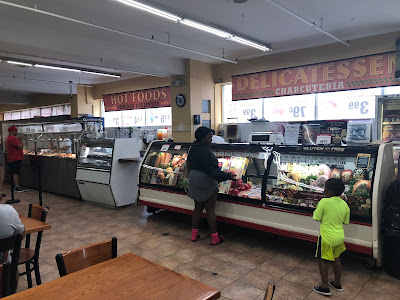 The first section we encounter is the hot food bar, deli, and bakery. The bakery is immediately to the right out of frame here, with the entrance just next to that. The signs you see here were installed over the summer of 2018, coinciding with the switch to Gala Foods. You can read more about the switch to Gala Foods here, or a much more detailed article here. 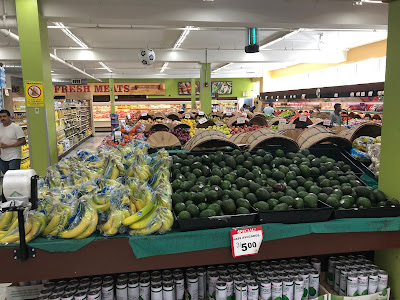 After heading down a small ramp, we enter the produce department. Main St is to our right in the above photo, with the front end behind us and meats along the side wall. The store's aisles run parallel to Main St. 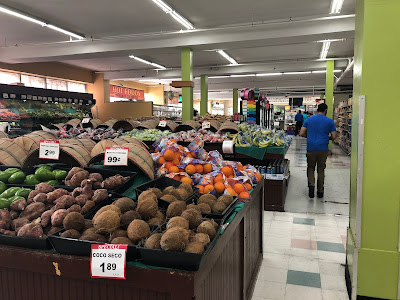 Here's a look back up from produce towards the deli department. The floor has unfortunately not been redone, although the decor is all new and the walls and columns are all newly repainted. 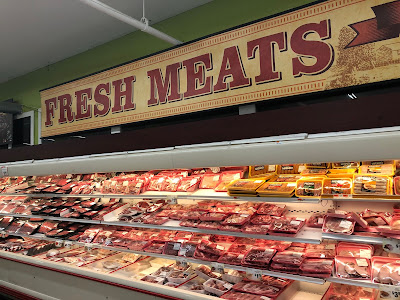 Closeup of the department sign for meats. Previously there wasn't a whole lot of decor in the store, and the colors were more the Compare Foods yellow and blue. 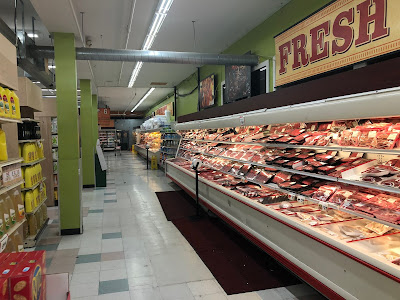 I'm going to assume that whatever is behind those windows is no longer in use (or at least the windows aren't)! Previously there was not decor covering the windows. In the above photo we're looking along the side wall towards the back of the store. 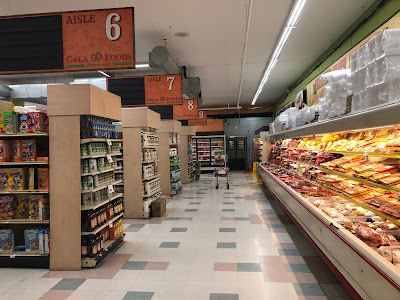 Note that these endcaps visible here are newly installed and have not yet been painted. Similarly, the aisle markers do not yet have contents listed. I don't remember seeing aisle markers in this store previously, which is a little strange. 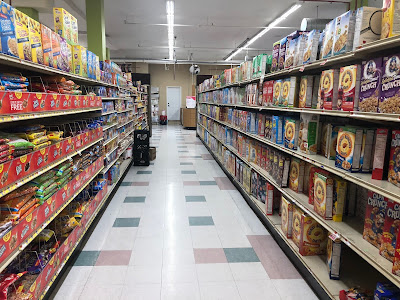 A look at one of the grocery aisles. The wall we're looking at is actually only about halfway across the store and is one of the many small businesses located inside the store, this one in an island randomly placed in the center of the grocery department... 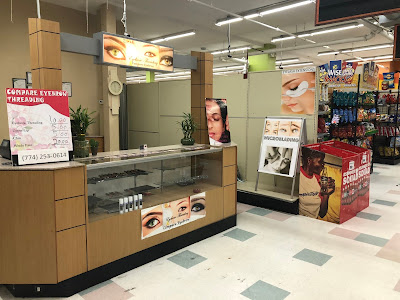 This is the center aisle of the store, and behind the Compare Eyebrow Threading booth grocery aisles continue to both sides. 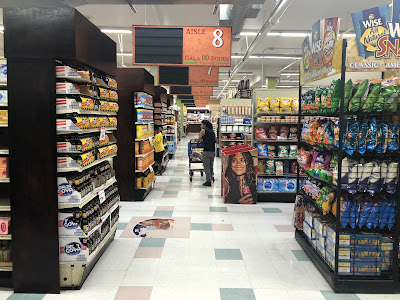 Looking back towards produce, here we can see some endcaps that have been painted. 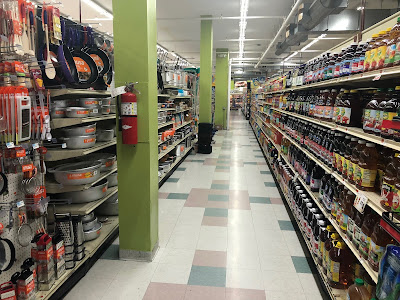 The floor is in slightly better condition here, although I can't say I love the pattern. We're farther towards the back of the store, which is home to frozen and dairy. 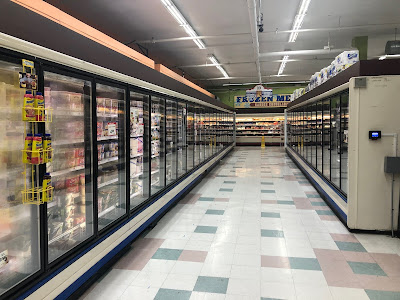 The center aisle begins just to my right in the above photo, and we're looking at the side (meat) wall. 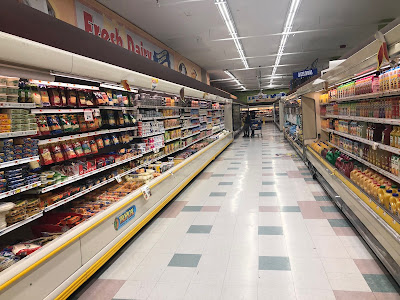 Some pretty old fixtures here in dairy, and still sporting the Compare Foods yellow. However, the department sign is all new. 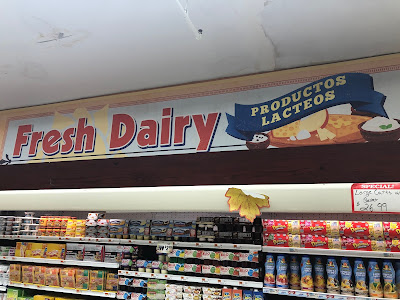 I really like these signs, which are rustic with a decidedly Latin flair. Perfect for this store. 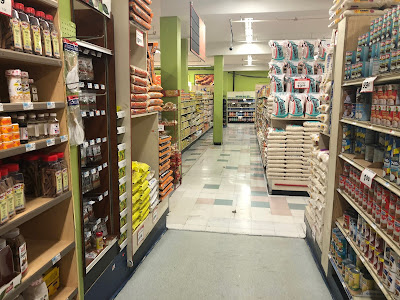 The different floor pattern here is actually a ramp that takes customers to the front-end area, which is at a slightly different level because the supermarket is a combination of at least two smaller storefronts. 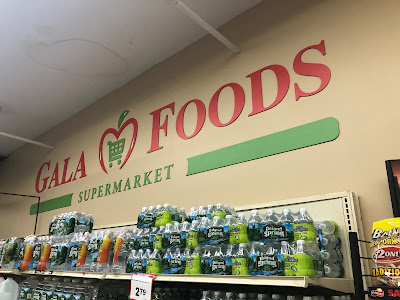 Big push throughout the store on the new Gala Foods logo. I'm not sure if Gala Foods is using this tagline, but the sister chain GalaFresh Farms uses the slogan The heart of the neighborhood, which works very nicely with the heart-apple-shopping cart logo. 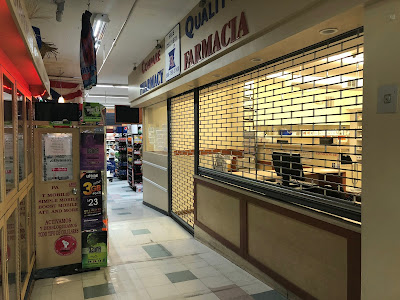 Here's a look at pharmacy and a few of the other small businesses inside next to the front-end. Pharmacy was closed on the Sunday I visited. 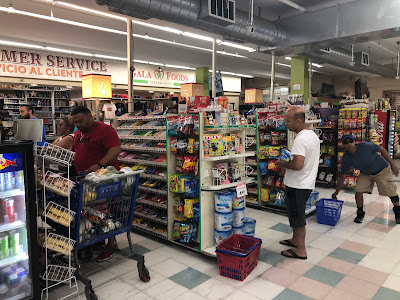 Quick look at the front-end, which has been slightly upgraded for Gala Foods with new register lights, a new POS system, and new graphics for the customer service counter. This Gala Foods is nice, although clearly an old supermarket, and the latest upgrades have been a real improvement if low-cost. The store doesn't need to work too hard, though, I think -- it's by far the largest Latin supermarket in Worcester and is regularly packed.