One more store tour in ShopRite week! Today we're heading out to Watchung, a relatively small town located half an hour pretty much due west of Newark, for those who aren't familiar. This ShopRite is owned by Springfield, NJ-based Village Super Market, whose stores we've seen in Garwood, Millburn, West Orange, and most recently, Livingston. This store is in sore need of remodeling, given that its latest full renovation was probably in the late 1970s, although it has been kept up better than similarly old stores in Elizabeth, East Orange, and Millburn. 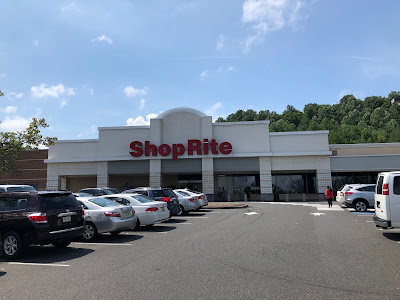 This ShopRite is part of the Blue Star Mall, a large shopping complex, and one of two major malls in Watchung. The other, Watchung Square Mall, includes a Stop & Shop as well as a Target and a Walmart. 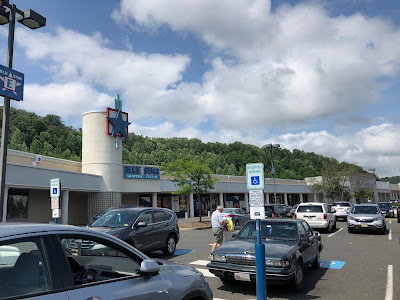 These storefronts, located just to the right of the ShopRite, are vacant but are "reserved" according to the online listing (click "Leasing Plan"). Rumor has it they're leased by Village Super Market in anticipation of a major expansion, but this is only speculation at this point. Plus, it's been going around for several years. We'll have to wait and see whether there's any truth to it! (Another possibility is that Village would move into the former Toys R Us space and expand into the "reserved" storefronts, thus creating a supermarket that doesn't have an angled space.) 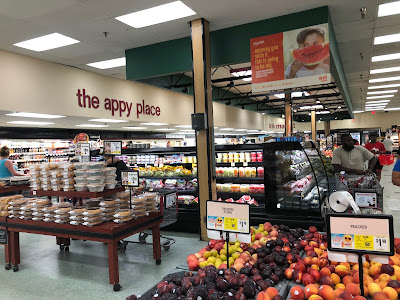 As per the usual Village layout, you enter to produce with bakery just next to the entrance, and deli and seafood along the side wall. This store is flipped in comparison to a store like Elizabeth or East Orange, as its entrance is on the left side of the storefront. 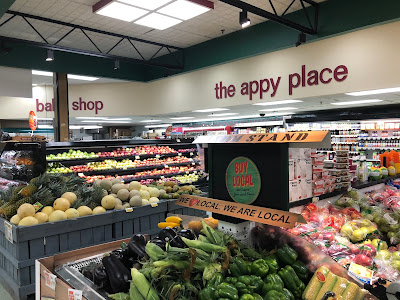 Insert groan here for "the appy place." As we'll see, this store has been spared a "the meating place" sign at the meat department. 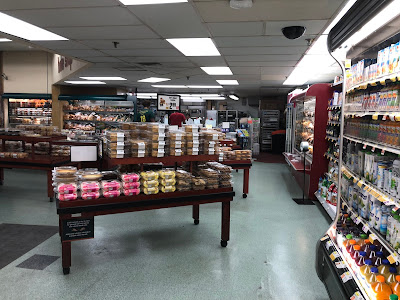 Very small bakery in the front corner of the store. The entrance is just out of frame to the left. However, their bagels are surprisingly pretty good! (For New Jersey, that is. For the rest of the country, they're absolutely amazing. I know this now that I'm in Massachusetts. The same goes for pizza and bread.) 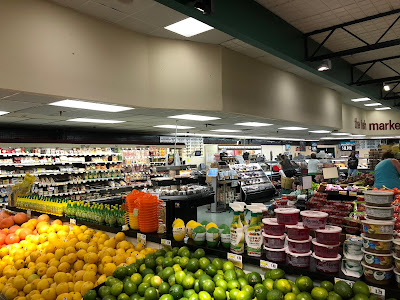 Strangely enough, the actual deli department has no sign. "The Appy Place" sign is over the packaged cold cuts section, to the left in the above picture. I do like the black structures over produce, which were presumably added later. My guess is this decor is from the late 1970s or early 80s, but was repainted with the color scheme of the decor we saw in Garwood and West Orange around 2005. The beige, green, and maroon colors are exactly the same and the paint job looks much newer than the actual decor.

Also of note is that this store is missing the wood paneling that should have come with this decor package. Acme Style points out that the decor is very 70s-style, but that it was probably installed later. I would disagree, since by the mid-80s, Village had moved on to this decor package, seen in East Orange. Clearly that store has been updated too, around 2005, but the department signage text is original. Watchung opened under Village's ownership in 1976 (previously under a different ShopRite owner), and this decor is undoubtedly Village's. The store, if it were renovated at all, would have to have been redone between 1976 and approximately 1985. Anywho... 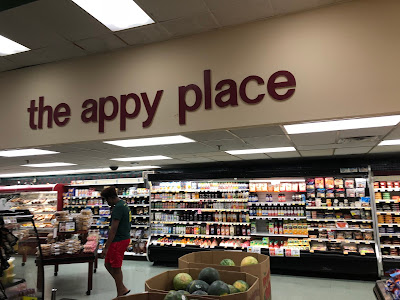 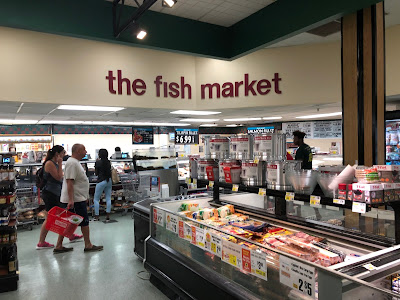 A service seafood department is located in the back corner of the grand aisle. Meat continues along the back wall of the store. 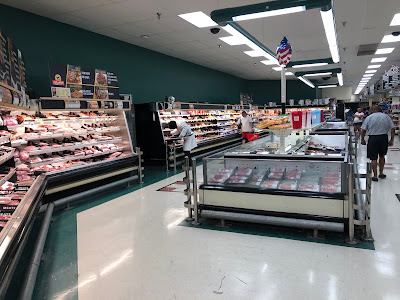 Again, I'm thinking this green color on the walls was from a repaint around 2005, and I like the effect. 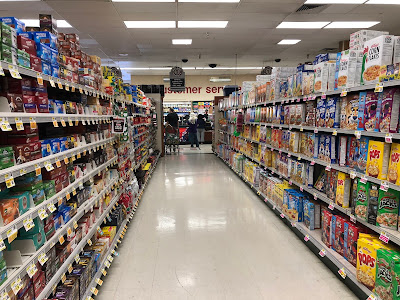 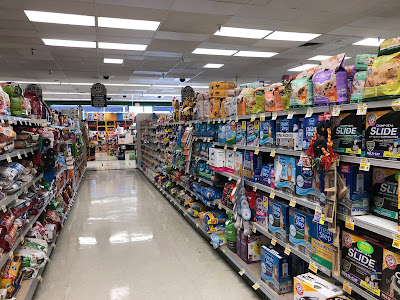 Dairy is in the back corner and continues along the side wall, with frozen on the far end of the store as well. 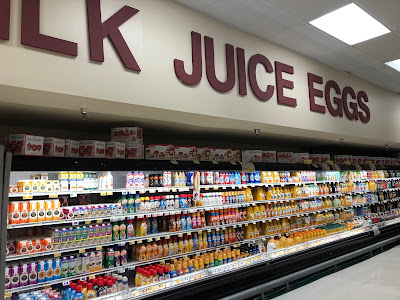 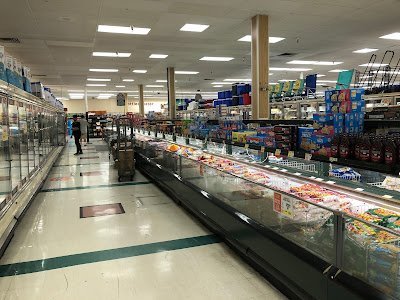 No freezer cases have been replaced in many years here, and the coffin cases are still running. I'm never a huge fan of coffin cases. 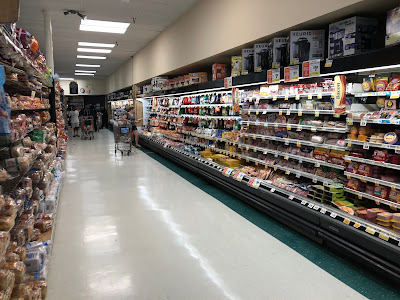 The dairy cases in the last aisle are probably either newer or recently repainted. Heading up to the front corner of the store, there's a small corner where pharmacy usually is for soda and bottled water, and a small floral department. 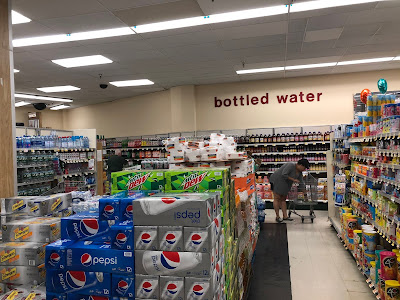 The checkouts are just to the right in the above picture. 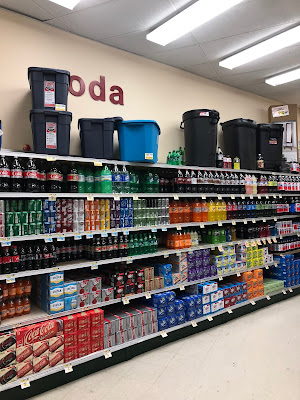 It's kind of a dead corner since there's not a lot of traffic through here; you only go to this corner if you need soda or water. Kind of a strange design. 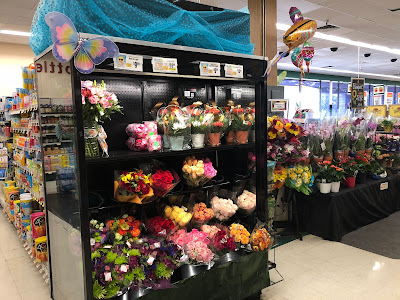 Here you can see soda to the left, floral in the center, and the front-end to the right. 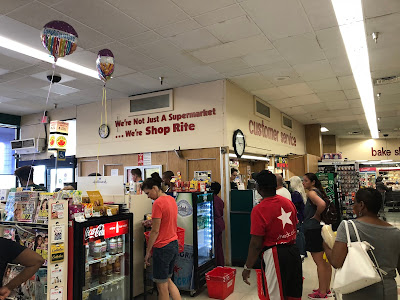 Customer service is on the far end of the front-end near the entrance. It's also the only example of this wood paneling in the store (at least, the only example I caught). Originally, I think there would have been more but it has been painted over or removed. 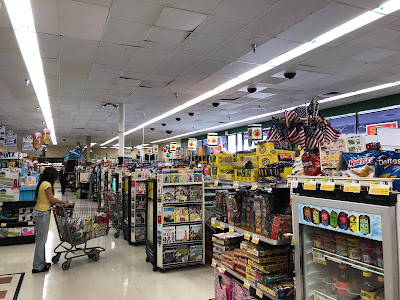 A look across the front end. The ceiling also needs to be replaced here, although the lighting is pretty new. All in all, it's not a bad store, it's just a little outdated. I'd appreciate a substantial renovation, but I'd settle for another repaint if they wanted to freshen up the store but couldn't invest a lot of money.