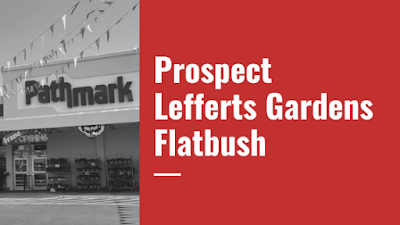 Alright, we've finished up Bushwick and are now heading to the southwestern portion of Brooklyn to see the area broadly referred to as Flatbush! Flatbush is a fascinating combination of landscapes, architectural styles, cultures, and of course, supermarkets. It is, of course, a massive oversimplification to separate this group of stores into just two neighborhoods, but in the broadest sense, Prospect Lefferts Gardens is the northern section of our tour and Flatbush is the southern section. Our route will take approximately the shape of Texas (I can't think of any other way to describe it), starting in the northern arm with Prospect Lefferts Gardens and stores along Flatbush Avenue, the main thoroughfare through much of southern Brooklyn. We turn west in the northern part of Flatbush to follow Church Avenue to the border of Kensington before returning east along Cortelyou Road in Prospect Park South. At Clarendon Road, we join back up with Flatbush Avenue to continue south in central Flatbush, then taking a detour a few blocks to the east to see Nostrand Avenue, another major business strip. From there, we head east to East Flatbush, then north along Utica Avenue, an important pass-through corridor. At Church Avenue, we turn back west to reenter central Flatbush before turning north again at Nostrand and circling back into Prospect Lefferts Gardens. The only reason I'm describing this route in such detail is that I did all the stores we're about to see in one beautiful spring day back in May 2019. A fair amount of walking to photograph 55 stores in one day, but entirely worth it! So we're going to jump right into it tomorrow with a greengrocer on Flatbush Ave in PLG!