In 2005, a group of independent Met Foods operators decided to split off from Met, then under the supervision of White Rose Foods, and form their own cooperative. This was probably the largest single blow to the Met Foods group, and the already-struggling cooperative started its quickly-increasing decline. The bankruptcy of White Rose put the vulnerable Met and Pioneer Supermarkets banners up for sale, and they were taken over by then-called Associated Food Holdings, today's Associated Supermarket Group.

The group of operators that split off in 2005 reorganized itself into the Neighborhood Supermarket Association, or NSA. This new group got the attention of Massachusetts-based Americas' Food Basket, a small chain of Hispanic-leaning supermarkets. Americas' Food Basket joined around 2007 and switched their stores to NSA Americas' Food Baskets. In 2012, however, NSA faced internal problems and reorganized its corporate division into today's America's Food Basket, borrowing the name of their largest member (save for the moved apostrophe, which interestingly enough switches the meaning from all of the Americas to just America -- as in the USA).

I'm still on the fence about AFB. I think it has promise but their performance has been severely lower than the grand proposals and promises made by the former CEO, Dan Cabassa. The new CEO, David Siegel, seems to be taking a more moderate approach.

The AFB chain of stores has recently made two store acquisitions, this location in Worcester, MA, which started as an Associated Supermarket that opened ca. 2014; and a former Compare Foods in Providence, RI which we will see a tour of in a little over a year.* As of earlier this summer, that store was still about 75% Compare Foods inside and out.

Man, that's an awful lot of text for a "snapshot". Oh well. 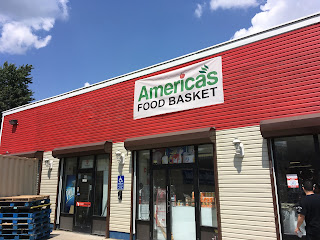 This tiny store has a tiny parking lot in front, most of which was taken up by two enormous storage containers which probably serve as the store's backroom! 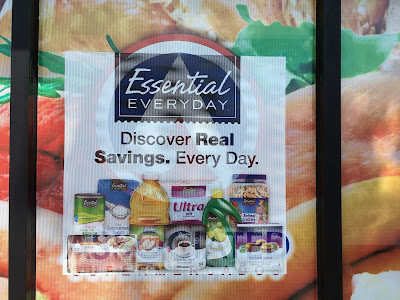 *If you're reading this and wondering how I linked to the future, I actually updated the post after the tour went up. But very observant of you!