Snapped these pictures of an independent supermarket-bordering-on-bodega recently when I was driving through the Bronx (when I was attempting to get on the Cross-Bronx Expressway, which was standing absolutely still). Funny that it's called Shop Mart Supermarket, as it was previously a Shop Smart Food Market affiliated with Krasdale Foods! 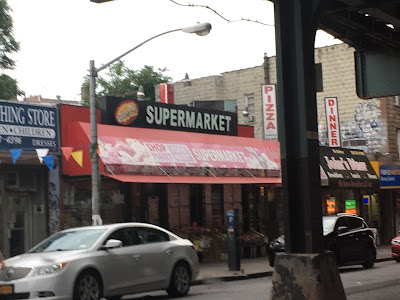 This is listed on Google Maps as James Grocery, 1792 Westchester Ave, Bronx, NY. Thanks to mysussex on Flickr for the correction! And no, I was not driving at the time of this photo.