Food Bazaar opened their Bridgeport, CT store in 2010. It was a huge former Shaw's that was completely renovated by Bogopa (Food Bazaar's owner) and it is a major success for the company. So much so that the nearby Food World IGA couldn't make it.

2011 image from Google Maps. Not even with their (very nice) facade renovations could Food World survive. So Food Bazaar took over, opening the 25,000-square-foot store as a Farmers Market by Food Bazaar in October 2015. 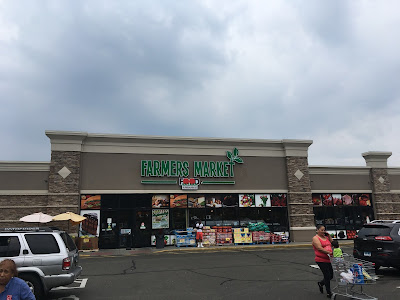 The Farmers Market is beautiful and contains deli, meat, seafood, and produce departments at full scale and small grocery, dairy, and frozen selections. Actually there was a very large frozen selection -- the entire store was ICE COLD. I swear the air conditioning must have been down in the 50s in there. I don't get it! Check out the interior here.