See, the wonderful thing about blogging about supermarkets is you can jump from state to state by just clicking on a different picture. If only it were that easy in real life.

Here in the most densely populated state in the country, which I call home, it can be hard to imagine rural food deserts. Urban food deserts are common, but their main problem is the combination of population density, lack of transportation, and lack of food stores. In rural areas, population density and access to transportation are not as important considerations. The problem lies in the distance between stores.

When I stayed in Mill Run, PA (the town where Frank Lloyd Wright's Fallingwater is; about an hour outside of Pittsburgh) this past July, the nearest grocery store was Miller's Grocery, a tiny country store with the bare minimum selection of groceries and produce, and a deli, but no fresh meat. Visitors could, however, have as much of the smell of mildew and old cigarette smoke as they wanted.

Drive a while farther (almost half an hour from the house I rented) and you'd get to G&D Market, another small country store with a better selection of produce, a better deli, fresh meat, and no bad smell. Of course, G&D was no larger than an inner-city bodega and with little more selection. But it wasn't depressing -- and it was very clean.

A local told me that G&D had fresh bread and Miller's did not. After visiting both stores myself, I can conclude my definition of fresh bread and hers were quite different. I picture something like this. On the other hand, she meant bread (packaged bread) that wasn't moldy or stale. G&D had this. Miller's did not. It was about 15 minutes to the next closest real supermarket. 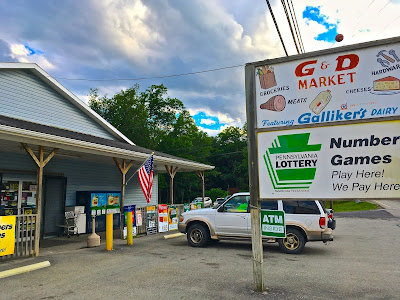 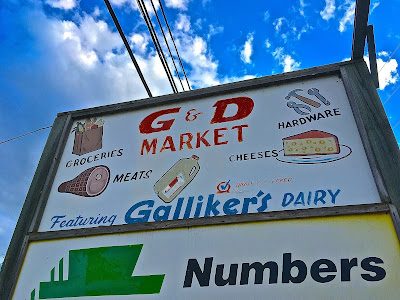 I doubt there is enough population in this area to support a large supermarket like I'm used to, which is why these small businesses can stay afloat. If this were northwestern New Jersey and there were a ShopRite nearby, forget it.