I took these photos of the Western Beef in Chelsea, Manhattan over the summer of 2017. For whatever reason, they disappeared into the depths of my computer's storage system and only when I transferred all of my photos onto a flash drive did I come across them and realize I never posted them! 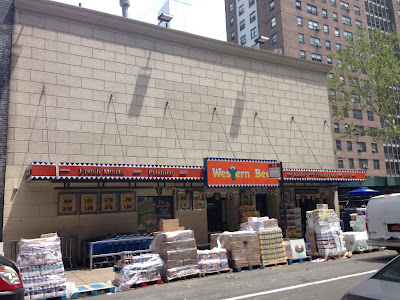 This Western Beef looks tiny from the outside. In reality, it is very small but not as small as it appears. The store's produce department lines the right side, with a small deli and hot food counter in the front corner. Like in some other Western Beef stores, there's a walk-in refrigerator room with meat and dairy; here it's located on the left side of the store (from the above view). 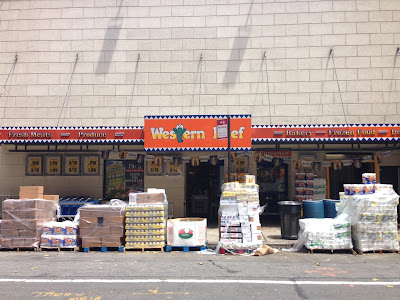 The store opened in 2006 as a replacement for the older store location at 403 W 14th St. This location, at 431 W 16th St, actually is smaller than the older location, although crazy-high rents are probably responsible for that. This location is slated to be closed by about 2020, and to be replaced by more upscale retail. Western Beef entered the Meatpacking District in that location in the late 1980s when it was not exactly a desirable neighborhood to be in. Like Food Bazaar, Western Beef has had incredible success in low-income, high-crime neighborhoods. Between those two chains, they completely disproved the widely-held belief that you can't run a supermarket in those neighborhoods. Now, put on your coats... 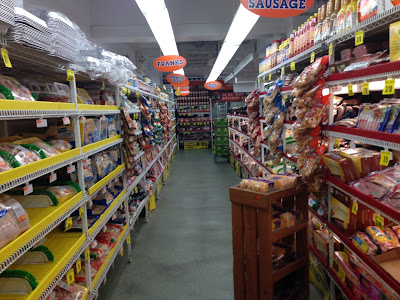 Here's a look inside Western Beef's walk-in meat cooler. No matter how many stores like this I've been in, it's still unnerving to see chicken and milk sitting out on grocery shelves.