I've been to a supermarket or two. I've seen big stores, small stores, crowded stores, empty stores, new stores, old stores, clean stores, and dirty stores. This CTown was a new combination of pretty much all of those qualities for me. 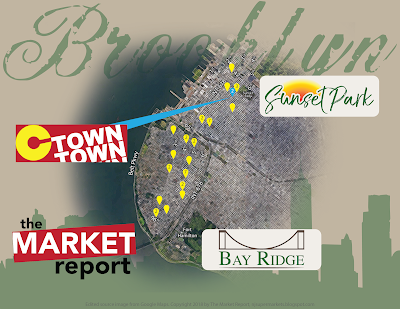 CTown is about 3 blocks south of the Key Food at Sunset Park and a block east of Friday's Bravo. As I had guessed with Key Food, this CTown opened as a theater but has been in use as a supermarket for more than 60 years. Read more about the history of the building here. 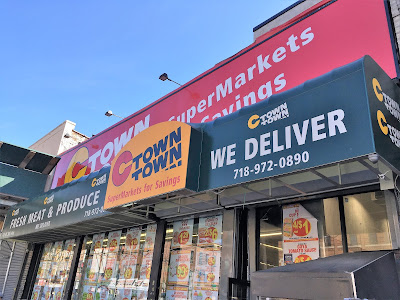 Although the storefront hasn't been changed in appearance in many years, all the signs here are new (they just look exactly like the old ones). The windows are also newly installed, but you'd never be able to tell that past the million and one sale posters. 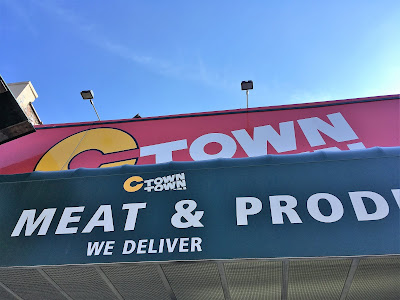 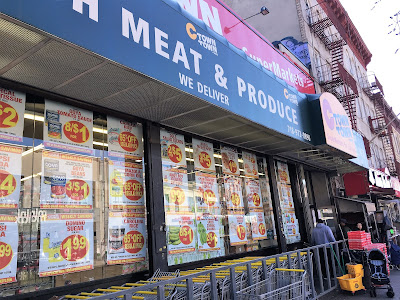 You enter on the right side, leading to the meat and produce aisle. Cold cuts are on the back wall with dairy and frozen in the last aisle. I do love the fact that the carts here are all the same and are all in relatively good condition. 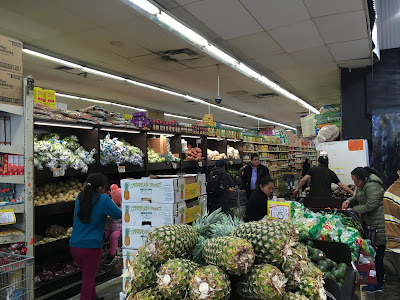 This is definitely an older store. It's the type of place where you're as likely to see groceries sitting on shelving as on something that's not shelving -- milk crates, for instance. For its size, the store was packed with merchandise. 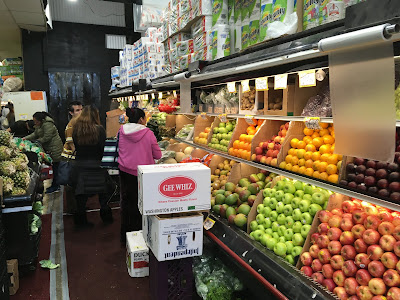 Produce separated by cut cardboard boxes. But hey, I don't mind measures like that too much when it means they keep the prices low. 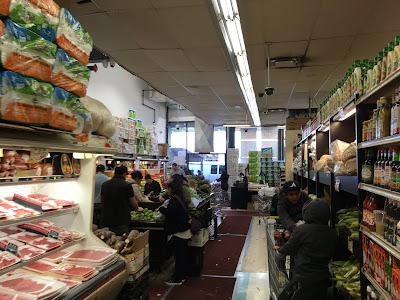 Meats continue along the first aisle. The floor isn't exactly beautiful, either. 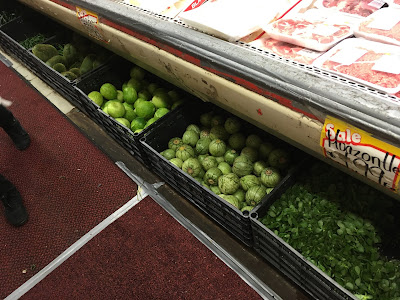 The store gets creative with their produce displays in order to increase selection in a very small space. Unfortunately for them, it is (at least in New Jersey) a health violation to store or sell food products placed directly on the floor; they have to be at least 6" up. 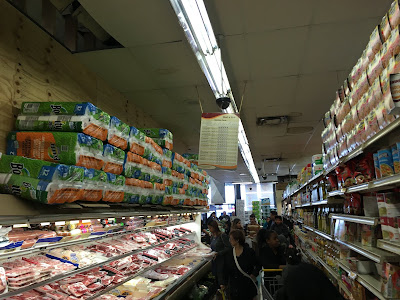 Why put up a wall when you can use plywood? You can also begin to see how crowded the store was in this photo. More on that later. 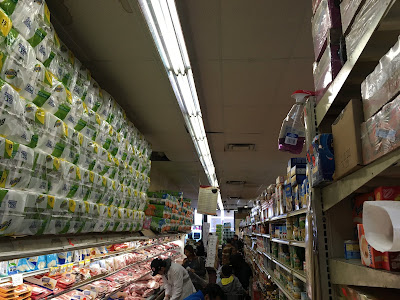 Better yet, why put up a wall when you can just stack dozens of paper towel packs? I also love the placement of that spray cleaner -- what could anyone possibly use that for? The above photo was taken from the back wall looking towards the front of the supermarket. 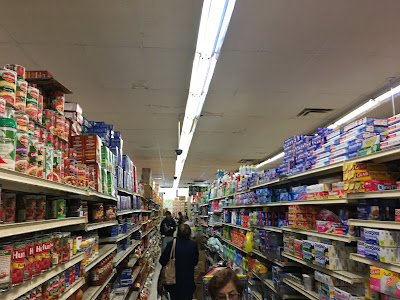 Photography was hard here because there were so many people around. As you can tell from the woman visible in the foreground, I was holding my phone up high to photograph over people. On a similar note, the shelves are very high in this store. 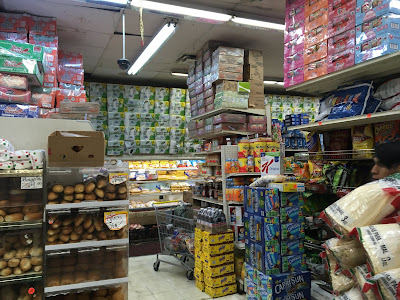 Looking along the back wall of the store towards the first aisle. 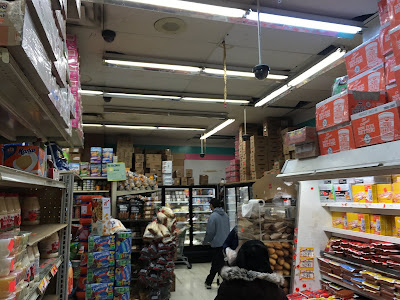 Looking along the back wall in the other direction, towards the last aisle which contains frozen and dairy. 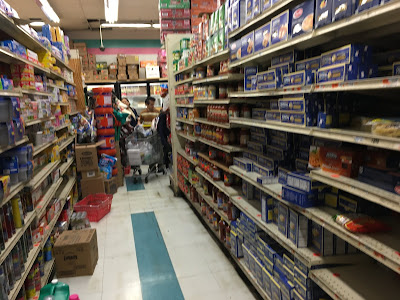 Although there were at least half a dozen employees restocking around the store, the shelves were still bare in many places. They didn't seem to be able to get food on the shelves fast enough. 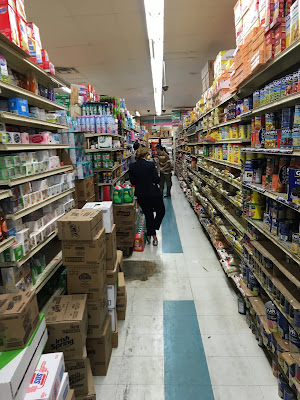 Plenty of stock waiting to be put onto the shelves. But here's where it really gets crazy. 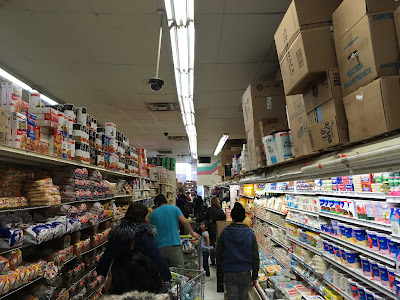 The last aisle was at a complete stop because of people waiting in a checkout line and others who wanted to pass them but couldn't due to a lack of space. It didn't help that school was out this week, so there were a lot of kids as well. 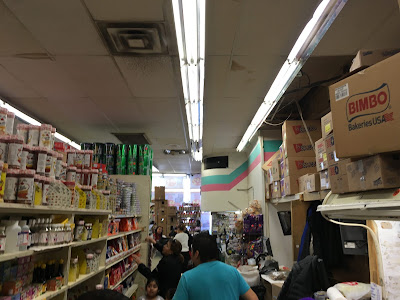 As of 2012, the store was owned by Ahmad Saleh under a corporation known as Immortal Rise, Inc., as seen in this lawsuit filed in 2012. However, on my visit, a female Asian manager or owner was present, suggesting that the store has since been sold. (It's also possible she was a representative of Krasdale Foods, I don't know for a fact.) It wouldn't be unusual for the supermarket owner, after the lawsuit (especially if it was decided against the supermarket owners, which it probably was), to sell to another owner or chain. 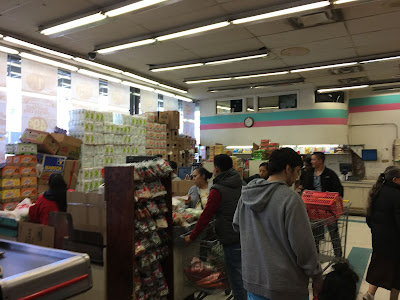 A look at the packed front-end -- packed with both people and merchandise waiting to be stocked -- before we head out.