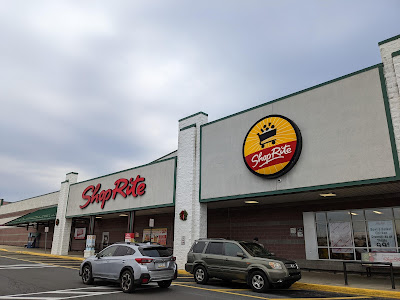 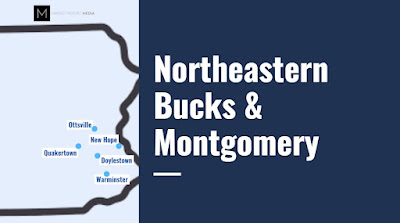 Welcome to our second Warminster store, following yesterday's quick look at the GIANT next door. This store is just slightly larger than the GIANT, coming in at around 70,000 square feet. There's a lot interesting about this store, so it'll be a fun tour. First thing of note is that the store was constructed as a Super G (owned by the Maryland-based Giant Food chain) in the late 90s. In 1998, when the two Giants were united under Ahold ownership, this store was divested with Supervalu buying it and converting it to Shop & Save. Shop & Save, in turn, sold to an independent businessman in 2001. Joe Cowhey, the owner, joined Wakefern and opened the store as a ShopRite towards the end of that year. In fact, Cowhey himself recently died, and his wife Deborah and their daughters currently run the business. 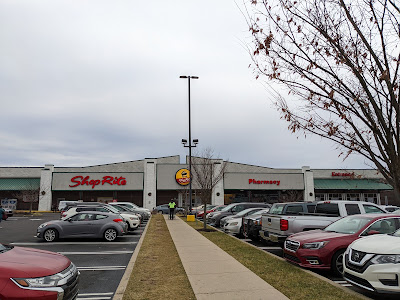 I didn't go into the GIANT, but it seems this ShopRite is a very high-volume store. It was rather busy when I visited, despite it being an off-time right after Christmas -- not a busy shopping time usually. 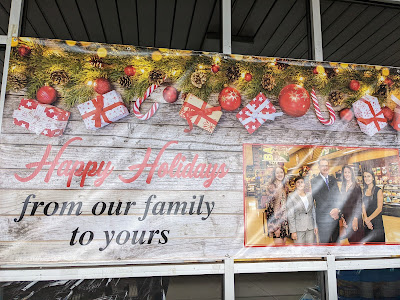 But it seems that they get a lot of mileage out of the local ownership and promoting that clearly and extensively throughout the store. Inside, while the store hasn't been a Super G for over 20 years, it still has quite a bit of Super G left inside. Maybe not the decor, but many of the fixtures. 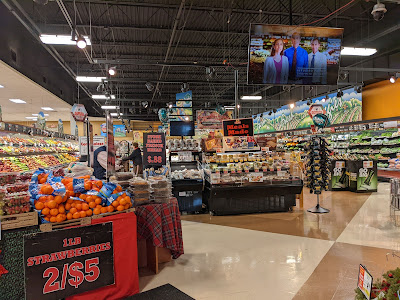 The decor, though, is notable too. More on that soon. 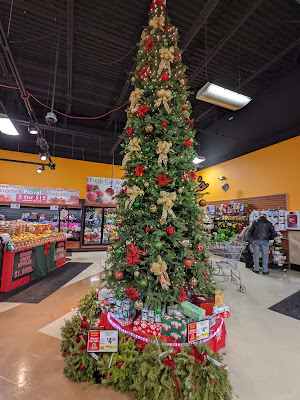 Can't miss this massive Christmas tree right inside the entrance. Behind that is floral in the front right corner... 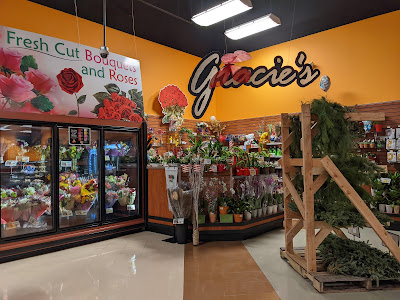 Produce is in the rest of the first aisle, with meat/seafood on the back wall and then bakery and deli up next from right to left on the back wall. Dairy and frozen are on the left side of the store, continuing into an alcove in the front corner. Pharmacy is in an island in the grocery aisles. I'm not 100% sure, but I believe that layout is entirely left over from Super G. 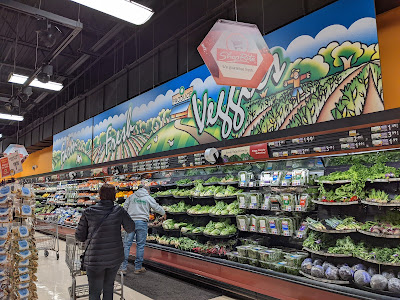 Does this decor look familiar to you? It probably does, and that's because it's in many of the Village Super Market ShopRite stores in northern NJ (plus some of their southern NJ stores). As we'll see, it's been modified to exclude the Village name and logo around the store, although the rest is all the same. It's a decor package I've always liked a lot, and I think it looks really good here. 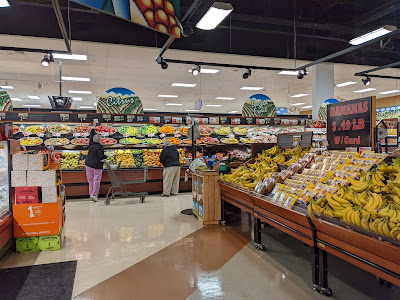 Notice the circular emblems around the department names. Typically, those are labeled with "Village Market" but here they are blank. I don't think it looks bad at all, it's just surprising. The orange color on the walls and the black ceiling are also good decisions, and something we don't see in the original Village decor package. 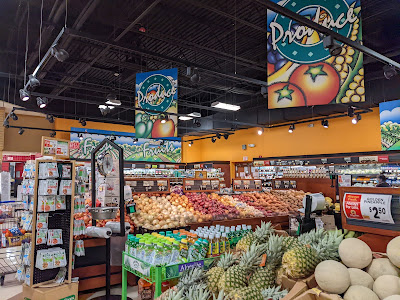 The rest of the store looks much more predictable, at least coming from those Village examples. I'm not 100% certain how many of these fixtures are left over from Super G, but I would bet many if not most. Notice the signage about the pre-packaged meats in "some of our competitors" which, of course, is a direct reference to GIANT which does not have butchers in most of their stores. 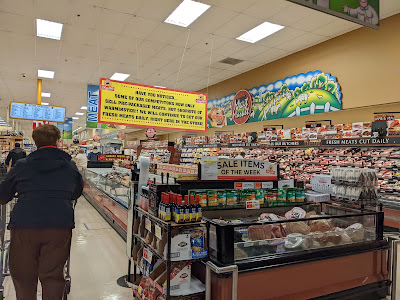 HABA is in the first few aisles, with the pharmacy at the front. 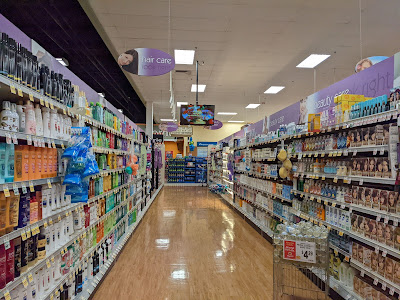 Again, we have a blank circle around the pharmacy lettering rather than any form of name. This is also a comforting decor package to me, since it was in the Village ShopRite I grew up shopping at. (I shopped at an ACME and two A&Ps until I was about six years old, and I can't say I remember those stores too clearly. Then we moved and we shopped at a Village ShopRite for the rest of my childhood.) 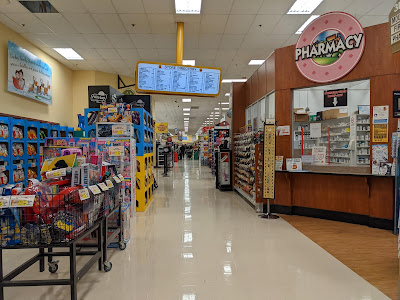 Pharmacy faces the front wall of the store, and the HABA department surrounds it. 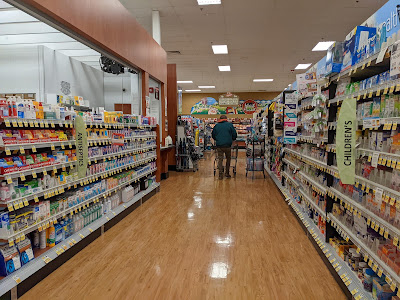 Can anyone pick up on the minor Super G decor detail left in the picture below? 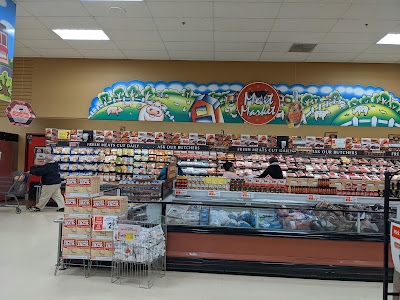 The siding-type pattern on the wall is left over from Super G. And speaking of decor, I'm going to say that the hanging category signs for meat, seafood, bakery, and so on don't seem to match the decor 100% and may have been created in the same style later. At least they're not part of the decor package as Village had it. 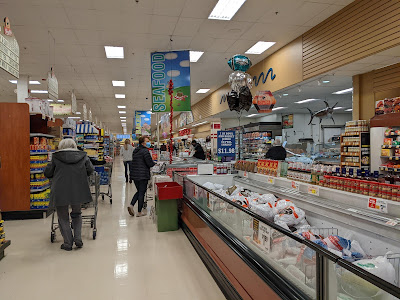 And a big aisle of value takes up the middle of the store. They're clearly trying to play up the local ownership and low prices here, and it seems the strategy is working. I visited one local competitor right before this one, which we'll tour tomorrow, and it was absolutely desolate. 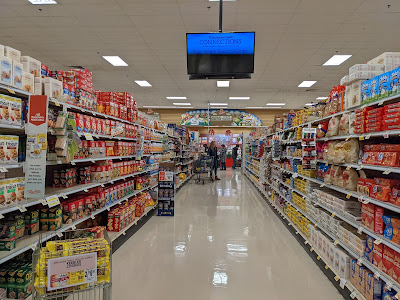 Not much to see in the grocery aisles, but we can see more Village-style decor in the bakery and deli departments. 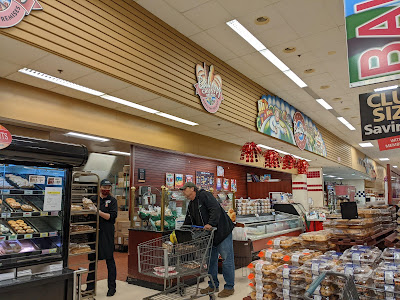 I'm going to guess that the maroon cases are all left over from Super G, since they seem to match what I know about how Super G stores looked in the late 90s. 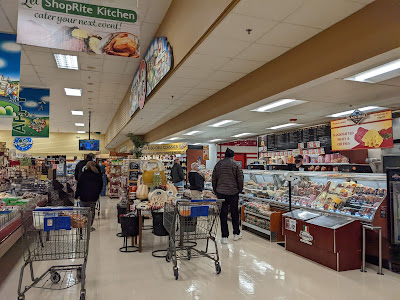 I also assume these hanging aisle directories are left over from Super G, but I'm not sure. Notice that these have the old ShopRite logo on them still, which means that this store opened with the old logo. The existing logo was adopted in 2002 if I remember correctly. 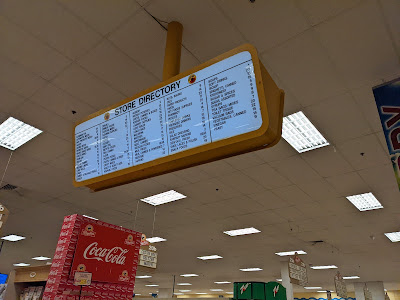 And, of course, in true Village tradition there is no deli here, just an Appy Department. 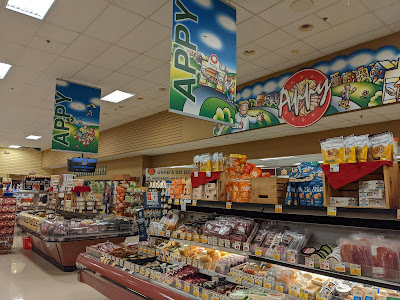 Dairy is in the back corner of the store with a lot of the Super G-era siding (not sure if there's a better word for it. Paneling?). 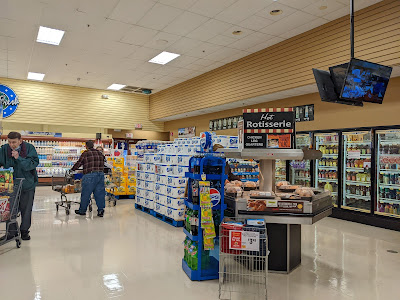 Frozen foods are opposite that and also in the alcove in the front. It seems these cases are also Super G-era, but I'm not sure. 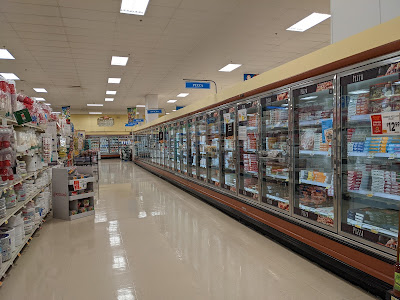 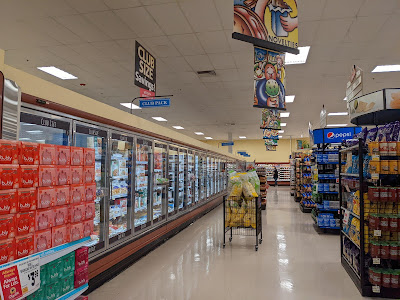 And dairy is on both sides of the last aisle. Notice that this store seems to have a lot more pictures and a lot fewer props (like the beams and other structures) on the walls. 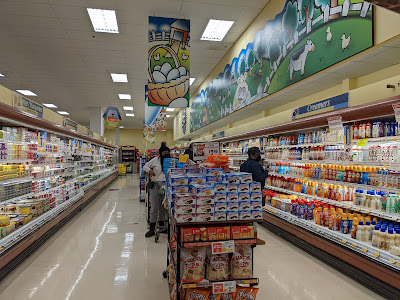 And more frozen foods, I believe in the front corner. 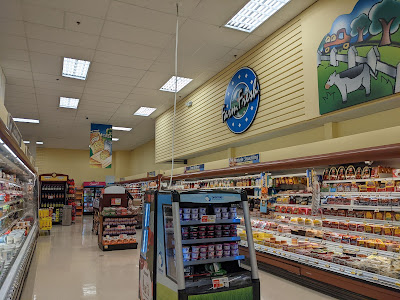 Lost track of my layout here in the last few pictures to be honest, so I'm not 100% certain where all of these are located. Notice the newer (post-2002) logo on the ice cream shop here. 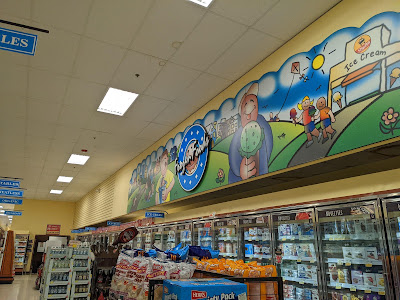 And here on the front-end, we see the (very old) slogan We're not just a supermarket, we're ShopRite! on the front wall, which seems to have officially died with this decor package. 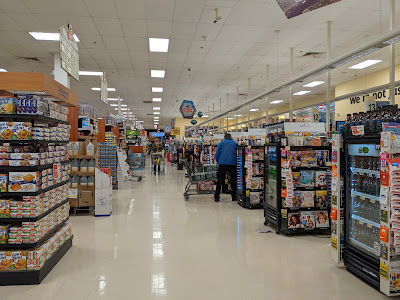 That's all for this ShopRite, an interesting tour for quite a few reasons. Up next we're headed just about two miles northwest to our next stop, which we'll be touring tomorrow here on The Market Report!