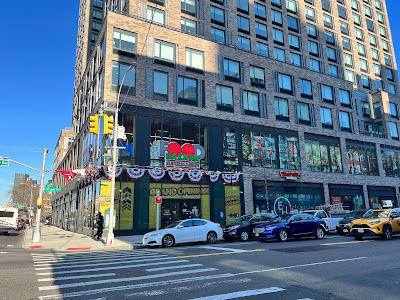 Welcome to the newest Food Bazaar! Technically the second-newest, with what's technically the newest coming tomorrow in an update. But this is the latest official opening of a Food Bazaar, until Flatbush opens at 1009 Flatbush Ave in Brooklyn on 1/20 in a former Stop & Shop. (Side note, the Stop & Shop is only closing on 1/19, meaning the turnaround will be a lot like the acquired Fairway stores, just overnight.) 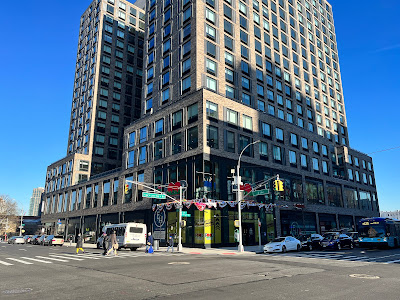 The Food Bazaar opened here in September 2022 on the second floor of the new-build One East Harlem development, just diagonally across the street from the former Harlem Pathmark. We've seen so many Food Bazaars going into former Pathmark stores that I was surprised they didn't take the Harlem store -- but they did in a way, just about six years later and across the street. Food Bazaar has been in New York City since they started back in 1988, but this is their first foray into Manhattan. The 45,000 square foot store has all the features of their larger, more suburban stores -- partially to its detriment, as the store is extremely cramped. But it's a beautiful supermarket, and one of the largest in Manhattan. I believe only a few Whole Foods and maybe a Fairway rival it for size. 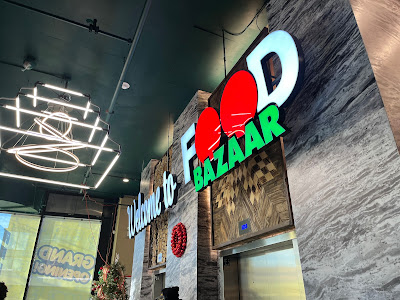 We enter to a foyer with elevators and escalators bringing customers up to the second-floor supermarket. As we'll see here and elsewhere in the store, no expense was spared for decor. Each intricate wood pattern is actually custom-made and hung. And of course, the light fixtures are incredible. Let's head up the escalator to the second floor... 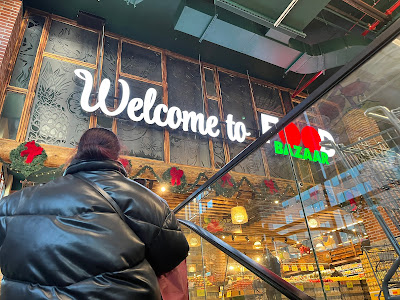 ...where we are welcomed again. But looking really good. The large windows all around this entrance give it a lot of beautiful natural light. You can see how large the windows are from the exterior shot. And once we're up on the second floor, it's a very familiar Food Bazaar setup... 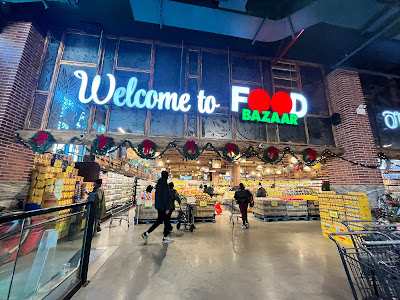 Produce is on the left side of the store, with the Fairway-inspired cheese and coffee counters at the back of the produce department. Seafood and meat then line the back wall, with deli/bakery in an island that faces into the grocery aisles. Dairy and frozen are on the right side of the store along with beer. 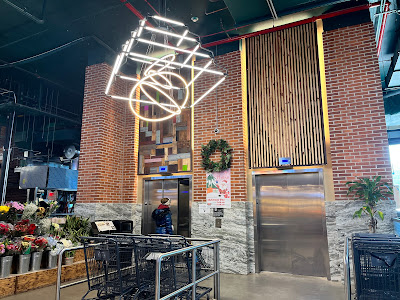 Not too shabby, huh? This is a view of the elevators from the second floor. And heading into the produce department, we find that it's smaller than that of a lot of Food Bazaars, but way larger than almost any other supermarket in Manhattan, where I'd estimate the average size of a supermarket is no more than 15,000 square feet... 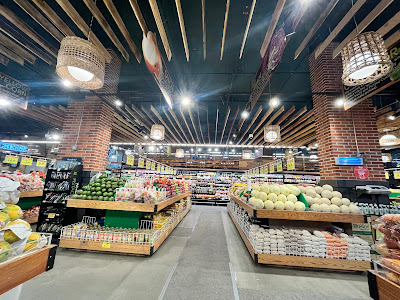 So many different interesting wood textures all around the store, but it feels very harmonius design-wise because it's all the same color pallette and tone. 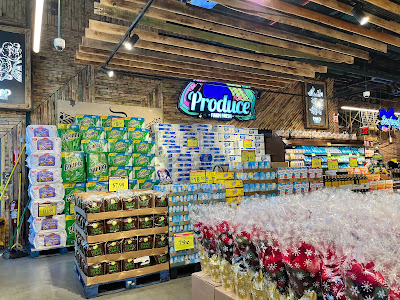 And opposite from that sale display area is the cheese and coffee island. This store does some of the higher-end Fairway-style services like store-made mozzarella. There is also a cheesemonger and a coffee clerk on duty to sell the items or offer custom services like grinding the coffee. 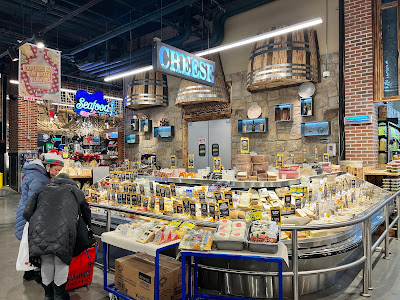 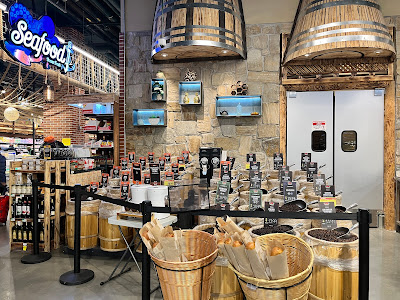 The coffee selection may be slightly smaller than what they have in the former Fairway stores, but still quite substantial. And the seafood department is similarly smaller than what we see in the larger suburban stores, but most supermarkets in Manhattan don't have service seafood, so even the abbreviated selection here is pretty extensive. And if we look at the picture below, there is the service case with the whole fish on ice but there's also a long curved display case to the right with self-serve packaged fish fillets. 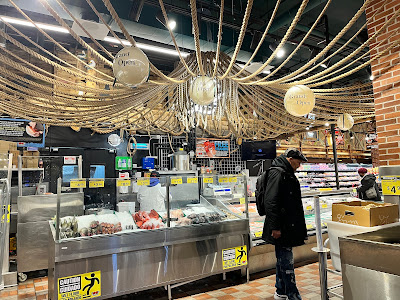 And as we continue beyond the seafood department, we enter the meat department which again feels quite small but is way larger than anything else around. 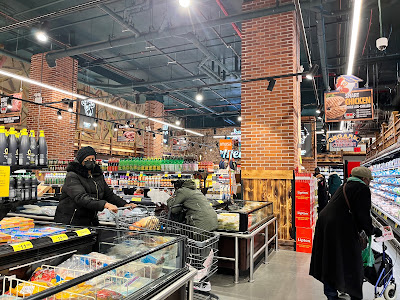 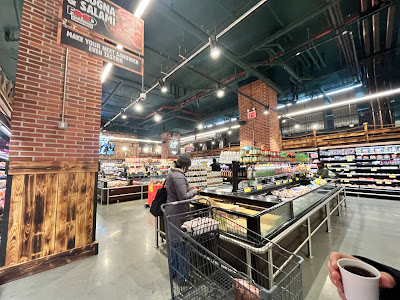 On the back wall of the store is the red meat, with poultry on the wall to the right in both the above and below pictures. And deli/bakery are on the other side of the poultry wall. 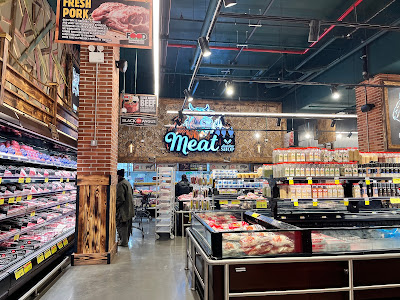 Once again, we have a smaller-than-usual butcher counter but still again larger than what we might expect at other supermarkets in this neighborhood (East Harlem). 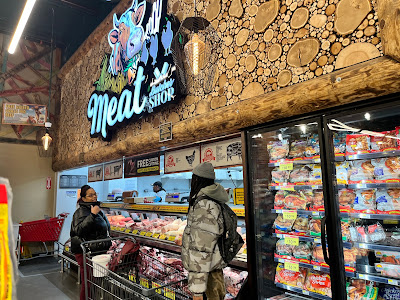 And as usual, beautiful wood decor. Now let's jump over to the other side of the deli-bakery island... 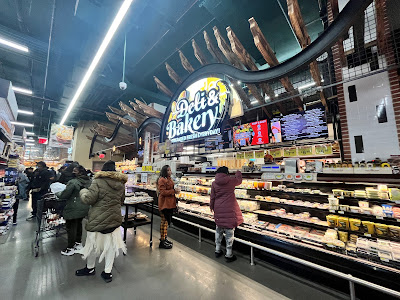 Interestingly enough, this department sign says Deli & Bakery, instead of the more typical Deli & Hot Food (used even when there is a bakery department there, see Flatlands' deli here). That also may explain why I believe Bakery is a slightly different font from Deli. But why bother change it, since there is also a hot food counter here? 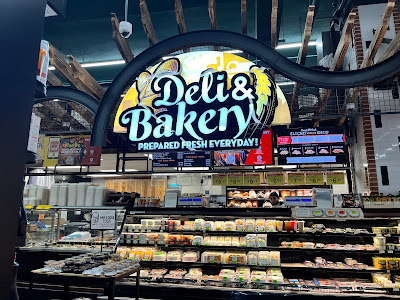 Anyway, the bakery is to the left of the deli department, with the hot food in the middle. 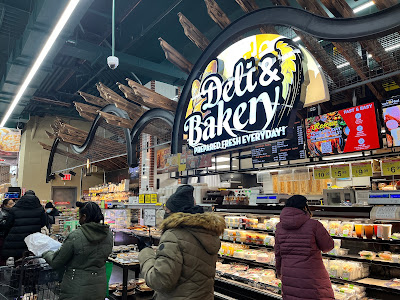 Getting into the grocery aisles, we see the standard wall of values in the first aisle, then the rest of the aisles look pretty normal, if much tighter. 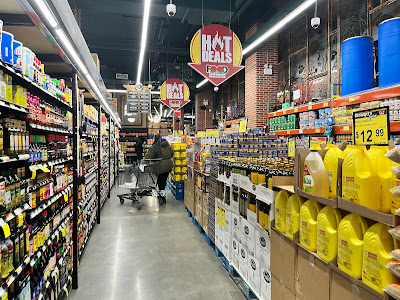 In the front of the first few aisles is a natural/organic section including gluten free and other special dietary needs foods. That is likely a response to the relatively new Harlem Whole Foods, roughly 5 blocks or 1/2 mile to the west. 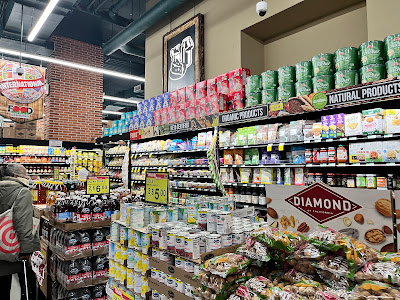 The fact that this store is on the bottom of a high-rise development means that there are a lot of columns around the store, making navigation difficult when it's crowded. 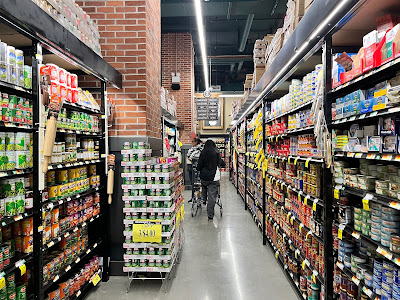 The selection in the grocery aisles is much like other Food Bazaars, just a bit smaller. 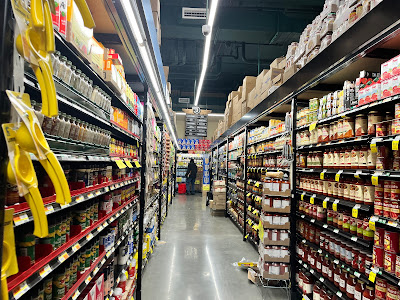 The famous international section is of course present here, but all condensed down to one aisle. 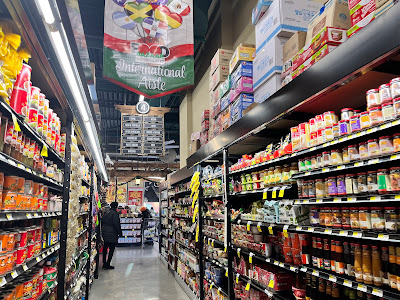 And there was a substantial nonfoods selection here too, likely because the smaller competing supermarkets don't have such a large selection of it. 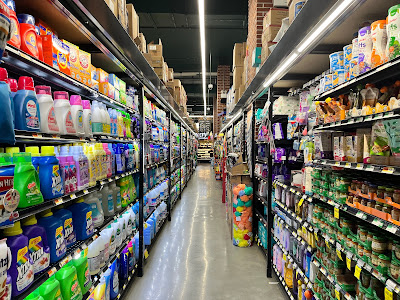 Beer is in the third-to-last aisle I believe, with dairy in the second-to-last and frozen in the last. 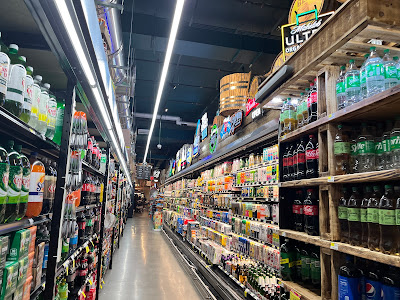 11 aisles in total, so the store isn't all that big. 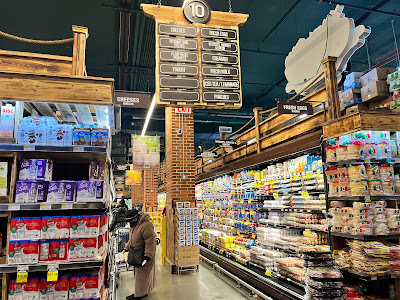 And the columns right down the middle of the dairy aisle don't exactly make it feel more spacious. 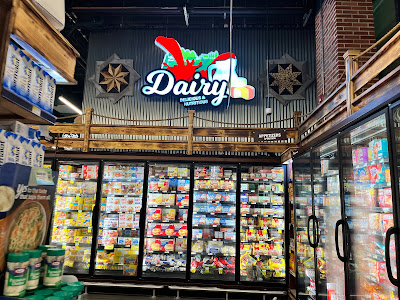 But as usual, the decor is beautiful and really exciting around the whole store. 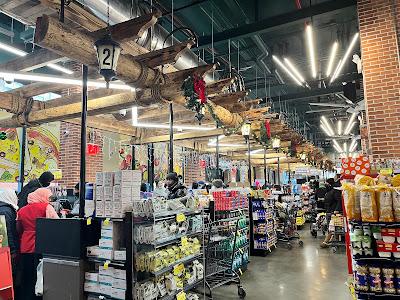 Speaking of that, the usual wooden structure with lamps over the checkouts is of course present here, as are the interesting LED light fixtures. And something really cool as we descend the down escalator... 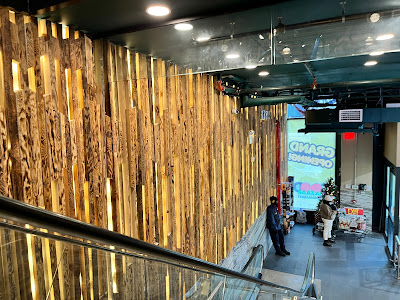 A beautiful wall of backlit wooden boards making up the other side of the entrance/exit foyer. The design here, as usual, is incredible and the store is obviously a major asset to the neighborhood (given how crowded it was even at an off-time on a weekday afternoon). But just a few weeks after this Food Bazaar opened its doors, another one did out in Queens, and we'll be seeing that one tomorrow. And now we're only a few days away from another one, as I mentioned, out in Flatbush. I'll have a lot to check out when I have the time! We do have a lot more stores to check out today and tomorrow, though! They are all linked below, although note that the last four links won't work until midnight.