The Market Report is starting soon with a brand-new group of stores in southwestern Brooklyn! Posts begin on Monday, November 12th, 2018 with a store tour. 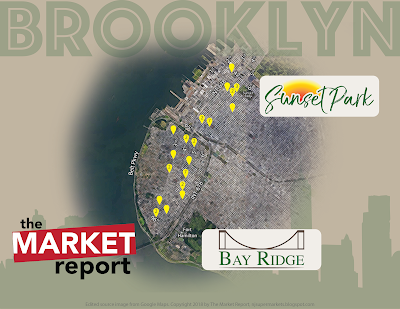 Each yellow marker represents a store, and the ones with numbers on them represent that number of stores (too close together to put multiple markers). We're going to start on the north end with Food Universe Marketplace at 4118 3rd Ave, Brooklyn, NY and work our way down. My pictures came from my visit to the area in February 2018.


Background on the Area

Sunset Park is a highly diverse, middle-class section that has areas of residential neighborhoods, vibrant and bustling business districts, and industrial stretches. Generally, the industry is closest to the water, moving to business districts on 4th and 5th Avenues, becoming largely residential by 6th Avenue. Just to the northeast of Sunset Park is the enormous Greenwood Cemetery, with the smaller but equally green Sunset Park (after which the neighborhood is named) a few blocks south. Sunset Park is incredibly diverse, with its population being 43% white and non-white Hispanic, 36% white, 29% Asian, and 25% other ethnicities.

Bay Ridge, on the other hand, is a much more traditional, quiet, and suburban (in some places) neighborhood. With a population made primarily up of families and that is 66% white, it's a slower-paced neighborhood. However, Bay Ridge does also have significant Hispanic and Middle Eastern populations, especially towards the eastern side. 5th Avenue is a major business center for the Middle Eastern community, while 4th Avenue and west is a primarily white area. 3rd Ave is also a major business district with trendier businesses such as Starbucks and many restaurants. West of 3rd Avenue is largely residential.

Regular posting will continue this week, including a store tour tomorrow, and we'll have another store tour next Monday, and memorabilia on Tuesday and Wednesday. Plus, come back on Thursday for a historical photo recently submitted to The Market Report and on Friday for a special video feature!