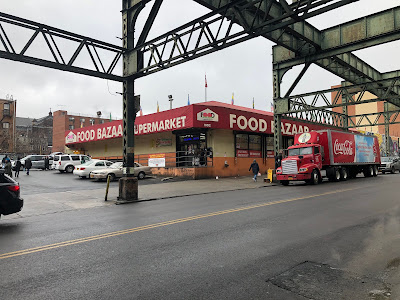 We're taking a look at another Food Bazaar Supermarket just about 0.6 miles southeast of the Food Bazaar on Manhattan Ave we saw on Tuesday. It's situated just off of Broadway on Myrtle Avenue (the other store is situated just off Broadway on Manhattan Avenue). The J and M subways run above Broadway to the north of Myrtle, where the M turns east and runs above Myrtle. The structure you see above the store is just a framework with no train line which extends a block west on Myrtle. I don't know whether it once was or was intended to be a train line itself, or whether it's just necessary as a counterweight. But either way, there are no trains running above the Myrtle Food Bazaar. The station is right around the corner though... 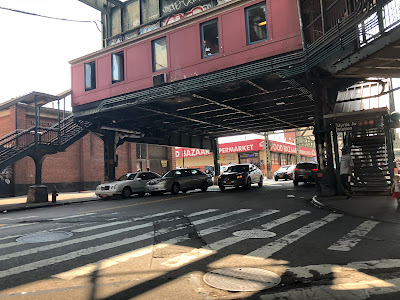 This photo was taken from the corner of Broadway and Myrtle looking west down Myrtle. Before we head into the Food Bazaar, let's talk about murals again! Like the Manhattan Ave location, the Myrtle Food Bazaar has formed a partnership with Groundswell to line the wall facing the street with a mural, Respect is the Strongest Compliment, highlighting problems of street sexual harassment. It's a bold statement with some powerful imagery, and quite a strong decision to cover the entire wall of your supermarket with it. Personally, though, I do believe that it's an incredibly important message to be sending, and I commend Groundswell and Food Bazaar for spreading it. 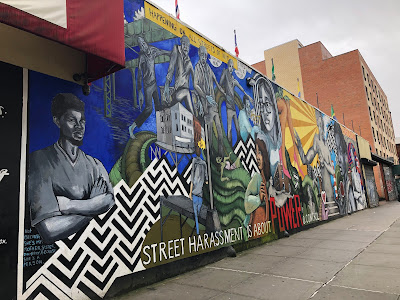 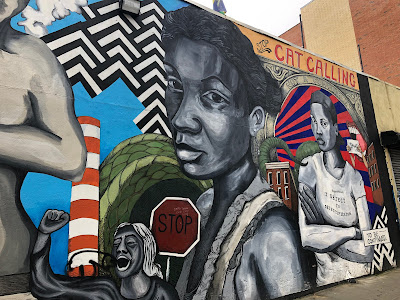 The opposite (back) wall of the store is also blank, but only faces a back overflow parking lot, so it's less likely that they will be adding a mural to that wall. 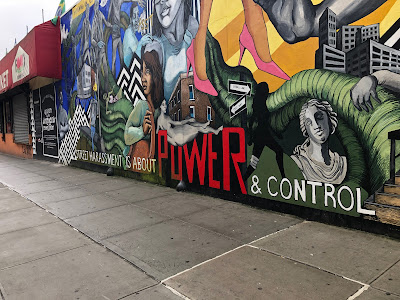 As with our previous Food Bazaar, there is some amazing detail in the mural. 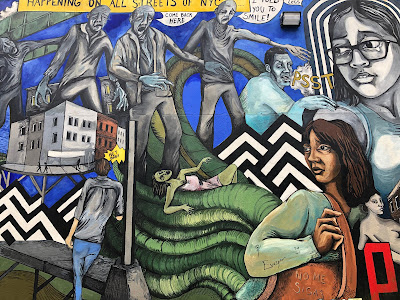 Here is a little background on the mural painted closer to the store's entrance: 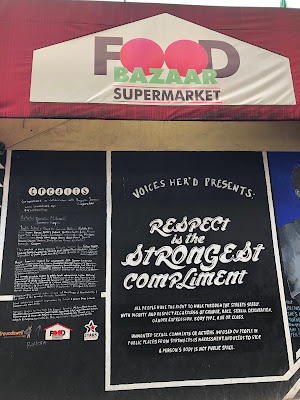 Now getting into the supermarket itself. 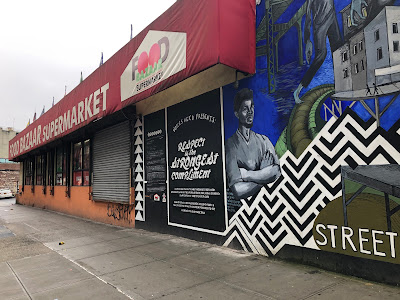 The store was previously a Food Dimensions, a now-defunct banner that Bogopa used for no-frills, smaller store locations in close proximity to larger, full-service Food Bazaar. Around 2009, the store was switched to Food Bazaar, despite its size of just under 20,000 square feet, making it roughly 1/3 of the size of Manhattan Ave. The store offers pretty much a full service lineup of departments but strangely no deli, a holdover from Food Dimensions. The layout is fairly standard, if a little backwards: you enter to a grocery aisle, the first aisle being natural/organic in the front half and international in the back half. Dairy runs along the back wall, and the produce/seafood/meat departments are in a separate room past the last aisle. I don't recall for sure, but I believe frozen foods are in the last aisle (i.e., near produce/meat and not the entrance). 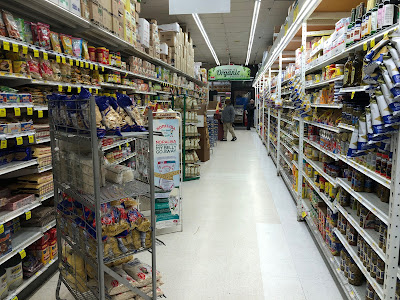 Here's a look at the first aisle looking towards the front of the store. Notice that the shelving on the outside (perimeter) of the aisle is new, while the interior grocery shelving is much older. 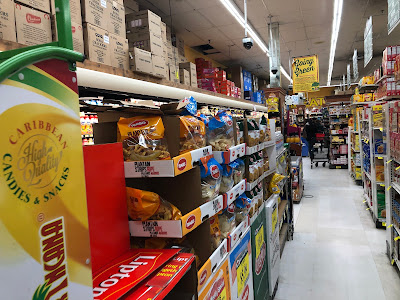 Here's a mediocre picture of the back wall of the store, where the dairy department is. The store might be small, but Food Bazaar makes the most of every square inch. 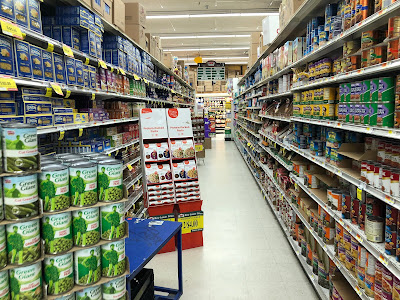 Standard (if very tall) grocery aisles. I find it very interesting that very little money appears to have been put into this location, and we see a similar pattern with the stores at 1590 Gates Ave, Ridgewood and 454 Wyckoff Ave, Brooklyn (the latter of which is coming to The Market Report shortly). I wonder whether Food Bazaar ever intends to consolidate the stores, since they are so close together. For context, Myrtle and Gates are both small (10-20,000 square foot) former Food Dimensions stores, and Manhattan and Wyckoff are 50,000+ square foot, more full-service stores.

Anyway, back to Myrtle! 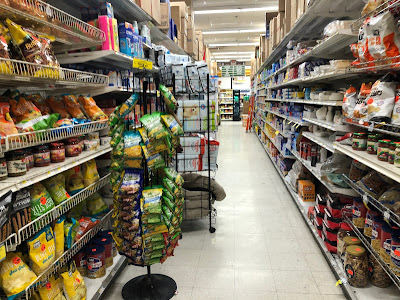 Despite the fact that the store has not been extensively renovated, it's still well maintained, extremely clean notwithstanding the high volume it does, and very nicely stocked. 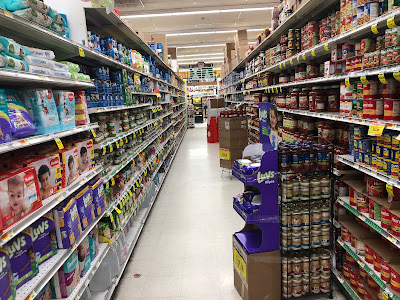 Yep, only a small supermarket in Brooklyn would put diapers opposite tomato sauce. 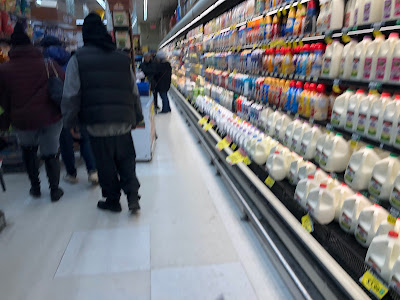 Sorry for the blurry picture, but we can see along the back wall of the store back towards the first aisle. Now let's head into the separate meat/seafood/produce room. Meat is in the back corner, with the butcher and seafood on the outside wall. Produce takes up the front corner of the store. 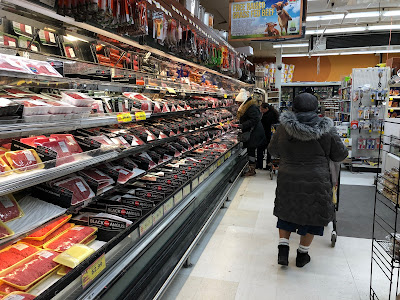 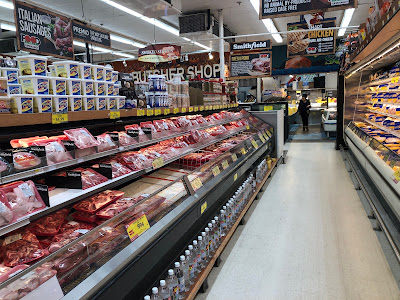 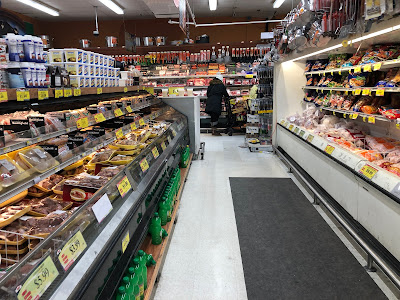 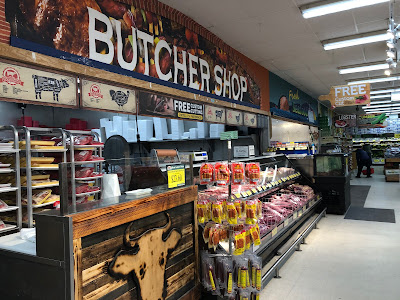 The wall decor dates to the 2009 renovation, but certain parts (the service counter fixture itself and the wood accents) are much newer. I don't know precisely when, and I don't know if it suggests the store is likely to be renovated soon. If you zoom in, you can see the brick accent along the top is actually taller than the wall, and they added a little bit of it to the ceiling! 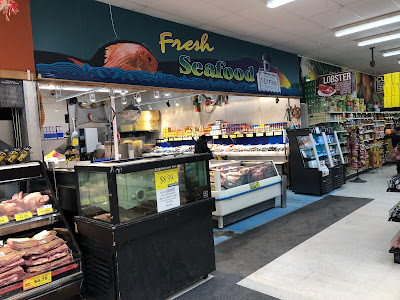 The usual huge seafood department, this time tucked away into a corner of the store. Produce takes up the rest of this side room... 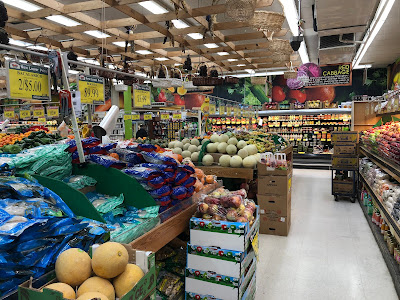 Quite similar to West New York, but the floor has not been switched to concrete. 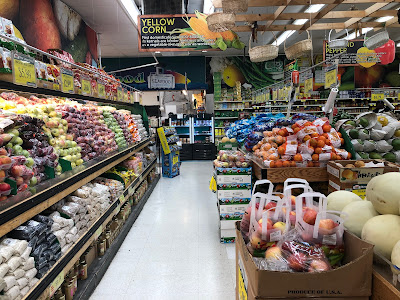 The meat department lines the back of the apple case visible to the left. 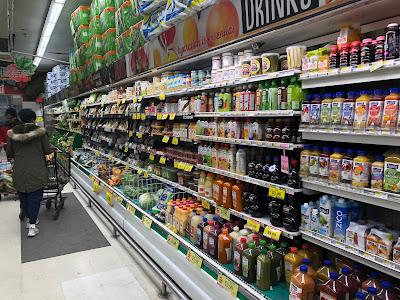 An ever-increasing selection of organic produce and "fancier" products on the front wall. I also really like the new category markers along the top of the cases. 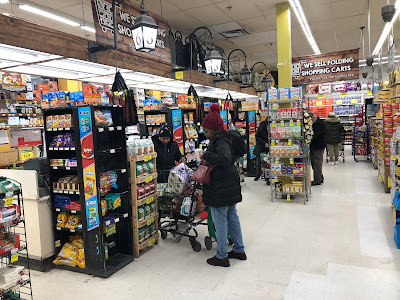 Updated register lights along the front end here, although the register light structure appears to date back to when the conversion took place from Food Dimensions to Food Bazaar. 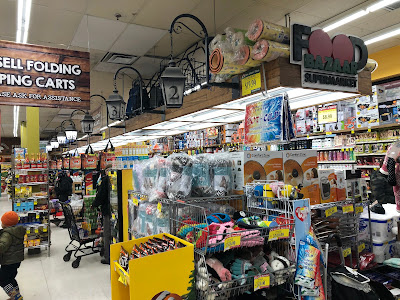 A look across the front-end, with HABA along the front wall. If the Food Bazaar logo seems strange at the end of the light fixture, remember that that's the first thing you would see when you enter. It's a scaled-down version of what we see in Elizabeth, for instance. 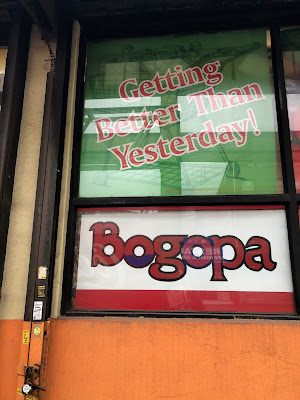 I think this is a good place to end the tour. I agree, Bogopa! For anyone who saw my post yesterday, I apologize for the mix-up and everything is back to normal now. Stay tuned as we wander across the rest of Bushwick for the next several days!