Kicking off our Elizabeth, NJ week with one of the stores I'm most familiar with, the Elizabeth Food Bazaar! This store took the place of a Pathmark that closed in December 2015 during the A&P bankruptcy. Brooklyn, NY-based Food Bazaar opened on this site in July of 2016 after gutting the space. The official grand opening ribbon cutting was held at the end of August 2016.

We're going to be touring the store in three parts. Today, we'll take a look at some pictures obtained by a Market Report contributor on opening day, literally hours after the store opened for business. We get to see the store in pristine condition! Tomorrow we'll do a full tour that I photographed the following weekend, then on Tuesday we'll see some content from the grand opening ribbon cutting. 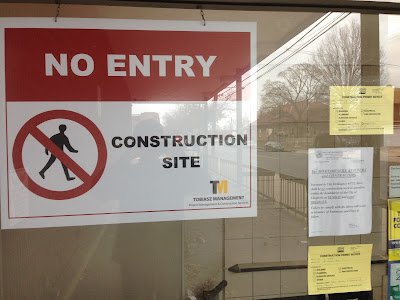 Starting off with a few of my own pictures while the store was under construction. 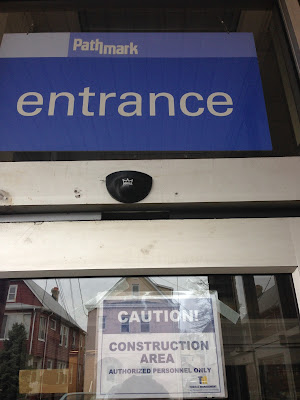 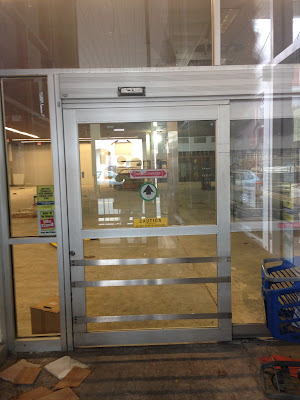 Looking in through the front door, we can see the entire store had been cleared out. Food Bazaar used the old Pathmark carts to carry around construction equipment and garbage during the renovation, then sold the carts. Quite a few of them are still kicking around at the ShopRite in Union, NJ. It's unlike ShopRite to use secondhand carts (some still with the Pathmark logo and Elizabeth aisle directory on them), but for whatever reason, they do there. 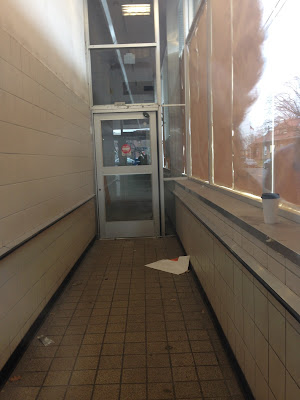 Looking in through the exit door. This hallway takes you behind customer service to leave the store. 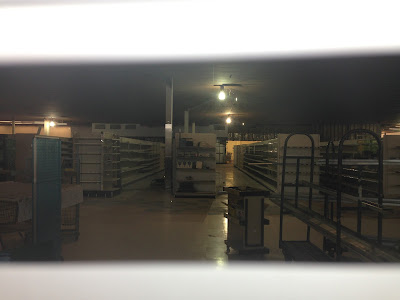 Looking in through the windows facing Grand St, we can see that the gondolas had not yet been removed. (All of the shelving was replaced though). The checkstands are gone in this picture. 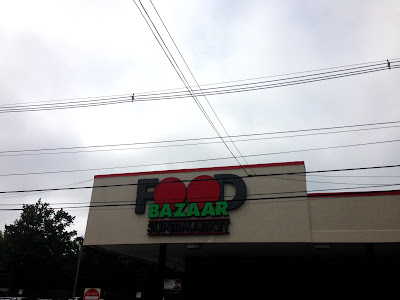 Jumping ahead to just a few days out from opening, here's a few more of my own pictures. The Food Bazaar sign had been installed, the facade and building had been painted (having collected a significant amount of graffiti during the renovation period), and workers were preparing the store for opening. The storefront faces Grand St (where I'm standing now), although the parking lot is to the left of the store. 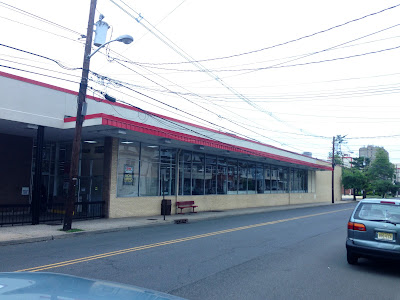 Here's a look at the side of the store facing Grand St. I'm assuming the building originally ended where that awning does, or approximately at the telephone pole to the left. It was built as a Supermarkets General ShopRite and completed in 1967, just two years before it was switched to Pathmark. Now for a few shots sent in to The Market Report from opening day... 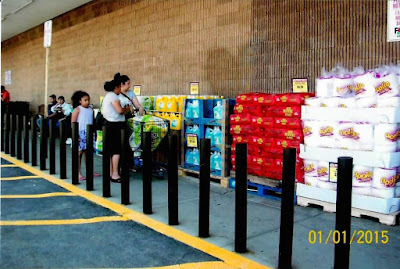 (Ignore the date in the bottom right hand corner.) The wall facing the parking lot, which is actually the side wall, was always pretty dirty with Pathmark. The area now has merchandise all along which helps to draw people there. 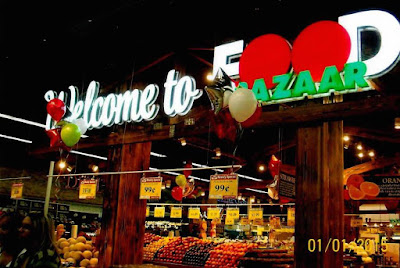 Quite the welcome upon entering! The store's layout is as follows: grand aisle on the left side, with bakery, deli, and seafood along the left side wall and produce facing. Meats and cold cuts line the back wall with frozen and dairy on the right side of the store. Floral and customer service are between the entrance and exit. 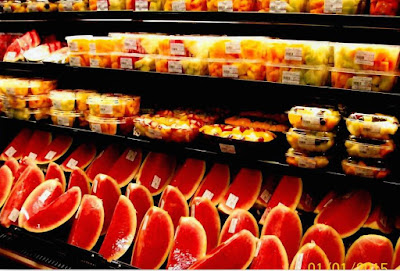 The prepared produce case faces the entrance, so it runs perpendicular to most of the produce cases. 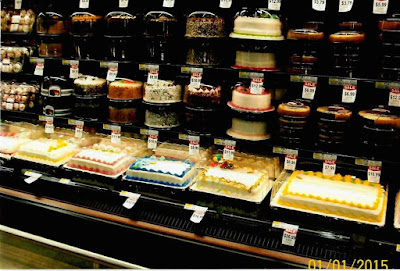 The cakes have been moved around a few times, but at the time of this picture, they were in the case between deli and seafood. They are now in an island opposite the deli/bakery counters, which makes a lot more sense. 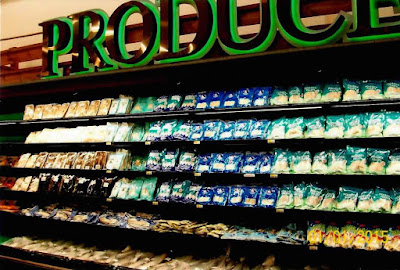 Yes, that is seafood. Yes, that sign says produce. But it's not as bad as it looks. The seafood department is in the back left corner of the store, and this extends along the back wall. So standing anywhere in the produce department, you can see this sign because it's on the back wall of the store. 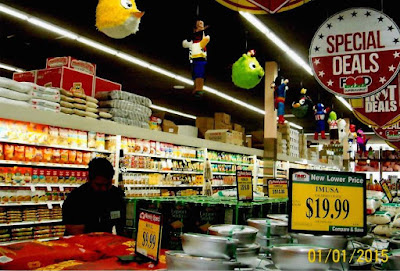 The first aisle is double-wide with sales in the middle and on the side backing up to produce. 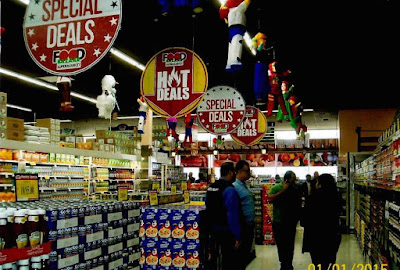 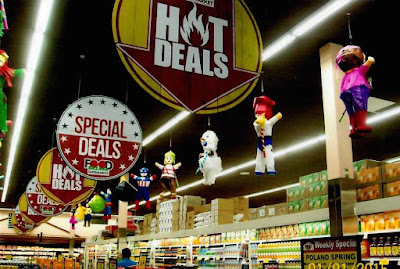 Although these signs go with the decor package we see in this store, they have been put in older stores to highlight promotional items. Some older stores, which are smaller, do not have the luxury of a sales aisle, so they are hung outside the store. The Elizabeth location is 50,000 square feet. 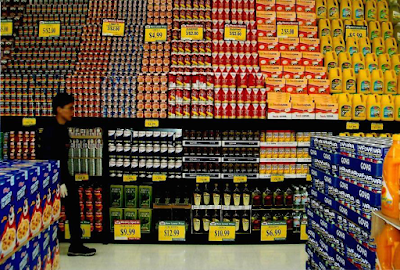 This is one of my favorite supermarket pictures of all time. I wish I could take credit for it, but I can't. Everything about this shot is perfect -- especially the employee walking by, and how perfectly stocked everything is. 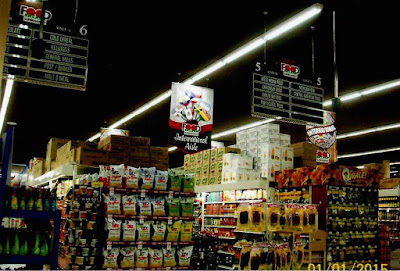 This Food Bazaar has two international aisles, mostly featuring Central and South American and Caribbean foods based on the neighborhood's demographics. There is also a small Kosher section down at the far end of the store and the occasional Korean or Polish selection (both of those populations are represented in relatively small numbers in Elizabeth, although the city used to be a Polish center; the owners of Food Bazaar are Korean). 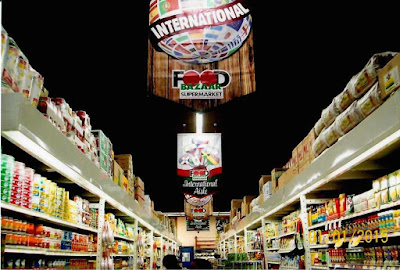 For anyone who's not too familiar with Food Bazaar, their business model is basically find a failed chain store, remodel it, pack it with really fresh and cheap produce, seafood, and international foods, and open the doors. So far, it's allowed them to grow from one location in Queens in 1988 to 25 with two more on the way in 2019. 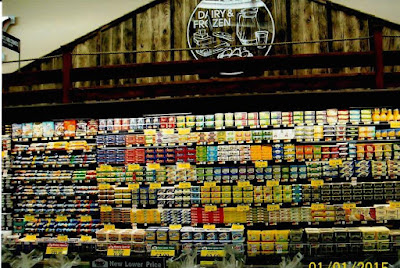 Part of the dairy department is located in the back corner of the store, with the rest running along the right-side wall. 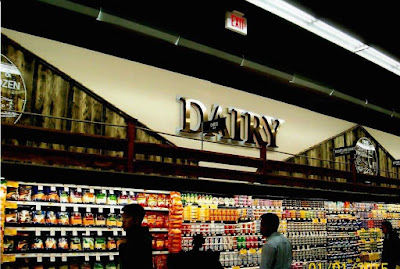 The only thing left over from Pathmark you'll see in this shot is the lighting fixtures. And even they have been updated to energy-efficient LED by Food Bazaar. 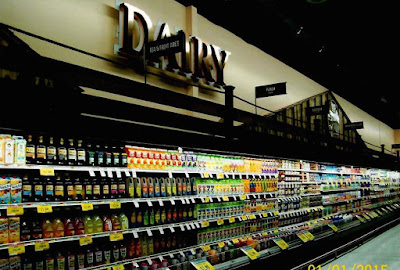 Here we're looking down the last aisle. Frozen foods cases face this. I don't know for sure whether the cases here are new or just repainted, but they look great. Note the backlit department signs, where each department has a different color. 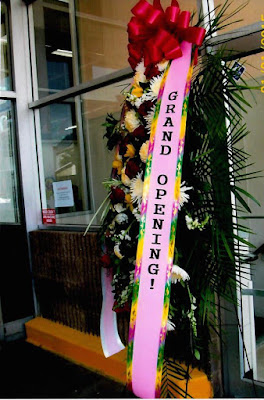 That wraps up our opening day photos. Come back tomorrow for a full tour!