An Associated Supermarket opened in part of a former BMW car dealership at 416 Morris Ave in 2011, and it later switched to Bravo. Soon thereafter, it became an independent store known as Caribbean Supermarket -- but interestingly, kept its Bravo sign, which it still proudly displays to this day. 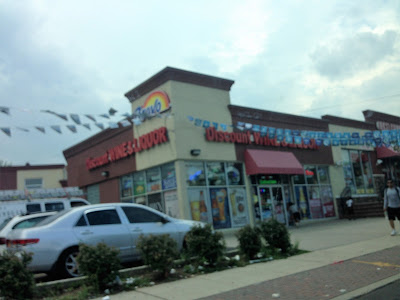 What we're looking at in this rather bad picture is actually mostly the liquor store, with the supermarket entrance visible to the far right. I got this shot because you can see the Bravo logo still up. When I visited very briefly years ago, the store was in pretty sad shape, but I returned to pick up a circular maybe a year ago and they had really fixed up the place, got a new logo and circular design, and stocked all the shelves nicely. Maybe new owners.