Some former supermarkets have been so badly butchered or, depending on how you look at it, so well reinvented, that you can't tell that it was ever a grocery store. Some look like they just closed yesterday. Others fall in the middle -- they still have the bones of the supermarket, but have been extensively altered. Today's Snapshot falls in that last category. 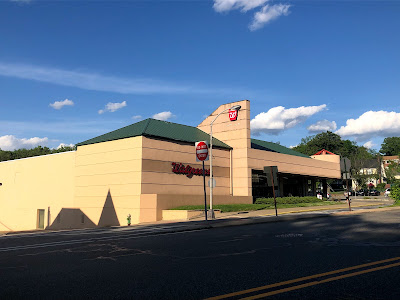 Yes, this building is now a Walgreens, and it was previously a Drug Fair. But you don't have to imagine too much to see it as a former A&P centennial-style store. Obviously the existing facade has been extensively covered, but the shape is still there. And the entrance still faces the parking lot on the side, just like it would have in the A&P days. I wasn't able to get extensive coverage, but there are still loading docks in the back also. The store has a basement, which is a no-brainer because it's on a hill meaning that the lower level is ground level in the back. I'd driven by this store a million times, but I didn't know it was an A&P until much more recently.