If you saw the A&P ad from earlier today, you know a little bit of the background here. A while ago, I scanned several supermarket ads from the Elizabeth Daily Journal from the collection of the Elizabeth Public Library. This one isn't a supermarket ad, but it was in the same paper as some of the other ads I scanned. And who doesn't want a nickel drink worth a dime? 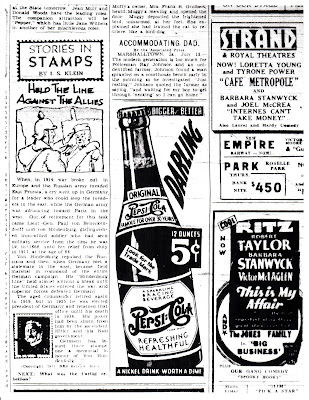 I've kept the various columns around the ad for some context, and because it's fun. I had originally (incorrectly) listed this as a 1914 ad with the A&P one, but it's actually from the Evening edition of the July 15, 1937 Elizabeth Daily Journal. You've gotta love an ad for Pepsi that says it's a "bracing" and "healthful" beverage.