Two Guys (originally Two Guys from Harrison, that's right, practically across the street from the Kearny ShopRite) was a discount department store that, at its peak, had "more than 100 locations in upstate New York, eastern Pennsylvania, Connecticut, Massachusetts, Maryland, Virginia, and as far as Illinois and California," according to Wikipedia. One of those locations was in Union, NJ, at 1721 Morris Ave. 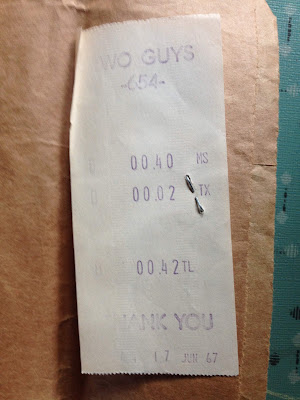 That's where my grandmother bought, on June 17, 1967, a greeting card for $0.40 and $0.02 tax. She then proceeded to put it in this brown paper envelope (which may have actually come from the store) and then put it away, not filling it out or giving it to anyone for the next 52 years. This was soon after she moved into the house she still lives in now. The card, if I'm not mistaken, is still in her attic and still blank.