Second Finger Lakes former supermarket for today's post. Corning, NY is a pleasant small city most famous for its glass factories and accompanying glass museum. You're probably thinking that a glass museum is boring as anything, but you'd be wrong. The Corning Museum of Glass is absolutely worth a visit if you're in the area. However, we're interested today in a building just shy of a mile west of the museum. 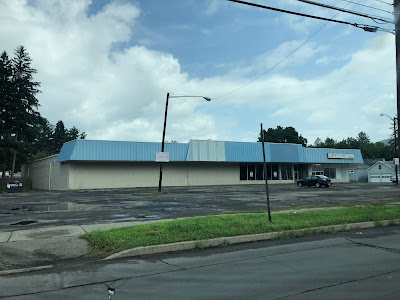 I'm pretty sure that this building -- which also is used in my graphic for the week, accompanied by an Adobe Stock image of a sign (I wish this building actually had a sign like that) -- was a supermarket. Most recently, it was a Salvation Army Thrift Store. If I had to guess, I'd say it was previously a Tops, which now has a large and fairly modern store roughly half a mile west in Riverside. Can anyone confirm or deny this? Byrne Dairy, a convenience store, now takes up a small part of the building to the far right, with the rest vacant. 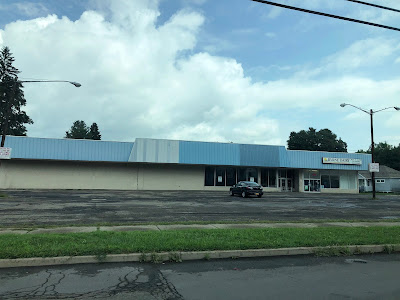 It sure has that supermarket look about the building, doesn't it? We're looking at 207 W Pulteney St, Corning, NY.