When we visited the Confluence Foodmart, I made a brief mention of the Diamond Produce store a few blocks west of the Foodmart. I decided to give the store its own dedicated Snapshot post. Although we're not really going to be seeing anything new, I wanted to separate it out as I'm pretty sure Diamond is itself a former Acme. (Incidentally, this week isn't themed. Next week will be, but then we're fast approaching our next big group of stores, 44 to be exact!) 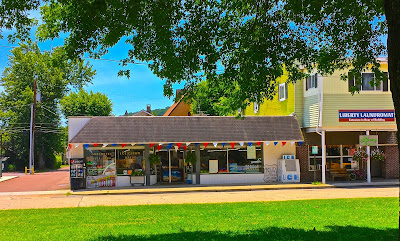 Okay, okay, we saw this picture already. I know. But let's take another look at it. Does the store not look almost identical to (if slightly wider than) the definite former Acme in Canandaigua, and maybe even closer to the likely former Acme in Union. (In fact, I started to do the Photoshop tricks to get the old Acme logo on this storefront, but I figured I could just send you over to the image I did for Union instead.) If you want to look it up yourself, the address is 606 Logan Pl, Confluence, PA.