To kick off our Connecticut week, we are checking out a brand-new store -- that is, one that has never before appeared here on The Market Report or on Flickr, as well as one that's actually very newly built. Opened in June 2017, this location in the Litchfield Village Green replaced an older store just west on US-202 which itself may have been an older Grand Union. 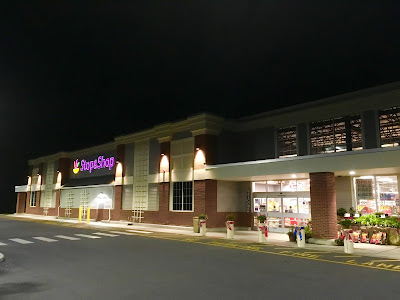 I photographed the store at night, then returned a few days later for an additional exterior photo. All of the interior photos were taken at night, so we'll be seeing very few customers and low stock in most departments. 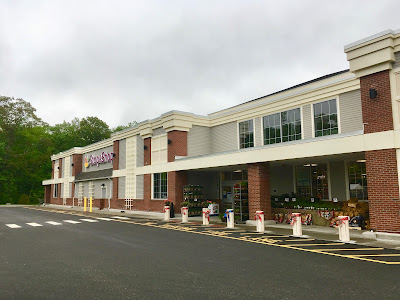 This exterior store model is quite attractive. However, it's strangely one-sided, and it gives the appearance that the store was expanded (when, in fact, it was built this way). Marking a departure from many earlier models, there is only one entrance and exit, both on this side of the storefront. You enter to the right and encounter bakery in the front corner with prepared foods and deli lining the right side of the store. Meat and seafood line the back wall, with frozen and dairy on the far side of the store with liquor in the front corner opposite the entrance. Although the store is newly built, it's just over 35,000 square feet, about 10,000 larger than the older store. And though it's not huge, the store certainly feels very spacious. 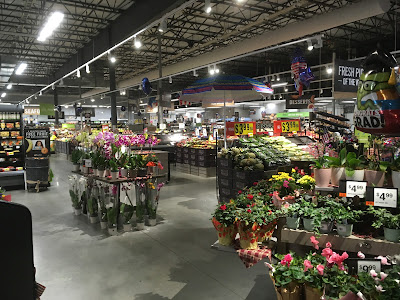 The color scheme here is top-notch. I love the dark floor and ceiling, and the lighting really accentuates the colors in the products. As we head along the perimeter of the store, we see the service departments... 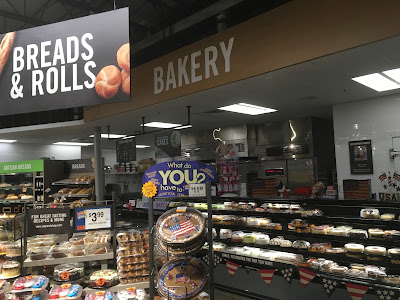 For me, this decor package really breaks down when it comes to the department signage. This signage is incredibly bland, and ought to be lit to draw your eye to it. Consider the effect with Food Bazaar's decor -- dark colors but lit signage. (That picture is from the Fairview location.) The problem is, many stores didn't get the deluxe facility upgrades, such as the floor and ceiling, and only got the boring signage, including one store coming soon to the blog. We can compare this big-time decor flop with the newer package, which is better. 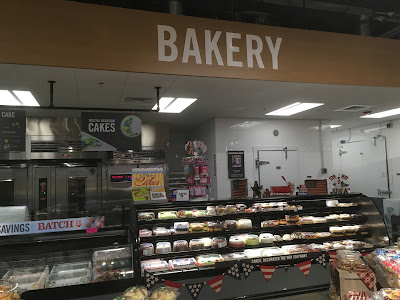 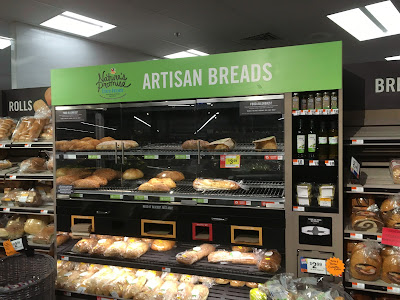 The selection of artisan breads was nice here, if a little cleaned out at night, but you can't really blame them for that. 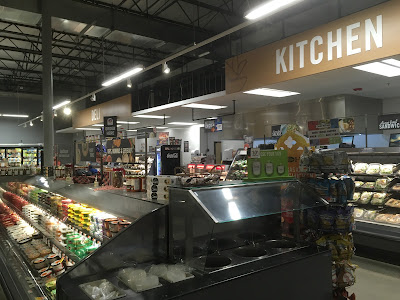 The next department along the side wall is the prepared foods department, followed by the deli in the back corner. Again, we have some puzzling decor choices, such as the drop ceiling over the prep areas without any soffit -- do I really need to see what's above the drop ceiling when I'm ordering my deli meat? Why even have a drop ceiling at all? 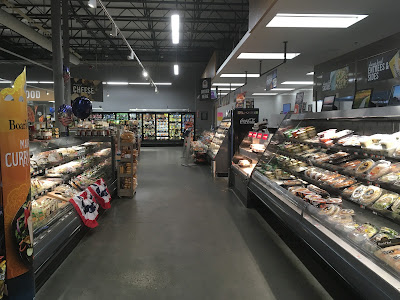 The fixtures, however, are first-rate, especially the lighting within the shelves. 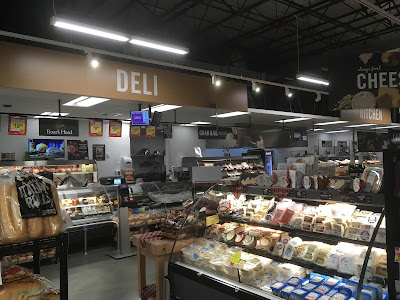 The produce department is quite attractive as well, and I can't really say I have any complaints with it, although this is largely due to the fact that there isn't really any decor in it either. 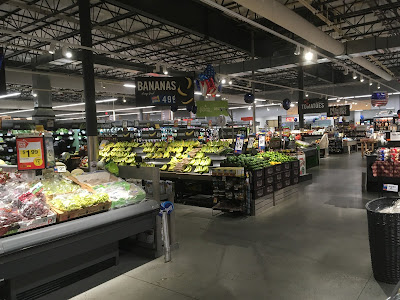 It is, however, spacious and nicely displayed. 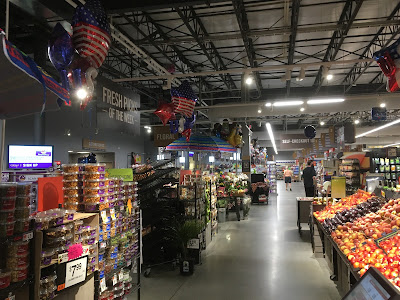 A look down the front-end from produce. Now heading to the back of the store, where strangely enough meat and seafood are combined into one fairly small service counter. 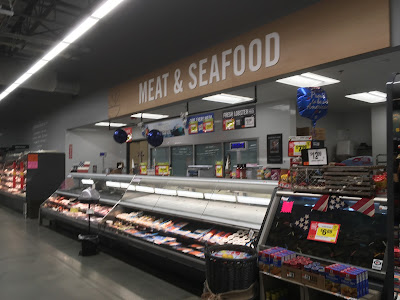 The folks at SuperFresh Food World wouldn't be too impressed with this meat and seafood display, especially in a newly-built store. (The cases are empty because I visited at night. The store's service meat and seafood department is fully functional at other times.) 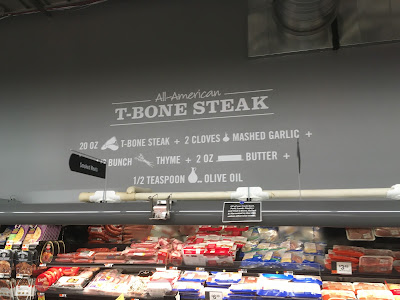 Sounds good. But is anyone actually going to read this, much less buy these items? I'd rather see this as more of a decor element that's repeated in other forms around the store. 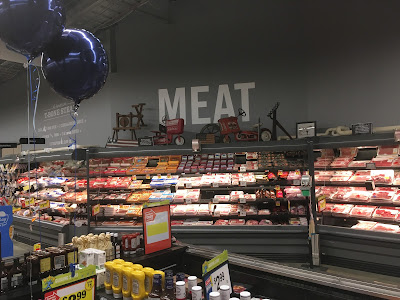 Packaged meat continues along the back wall of the store. 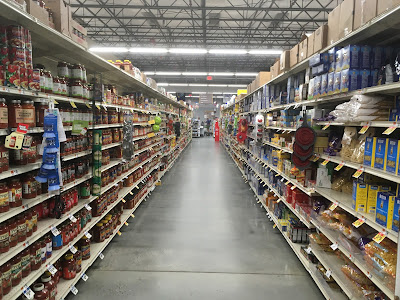 Heading over to the grocery aisles, we find disappointingly 1980s-looking shelving. Especially in this shot, the store is starting to look more like Big Jim's Discount Grocery Warehouse than a new build Stop & Shop. To be fair, in person, the store felt more upscale somehow. 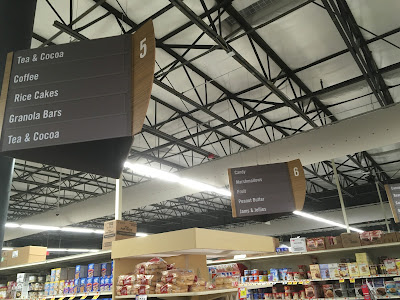 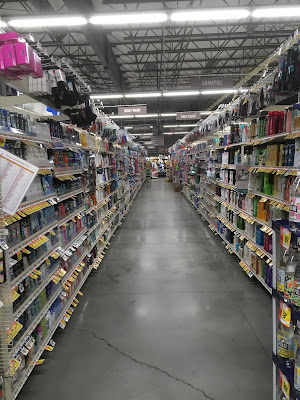 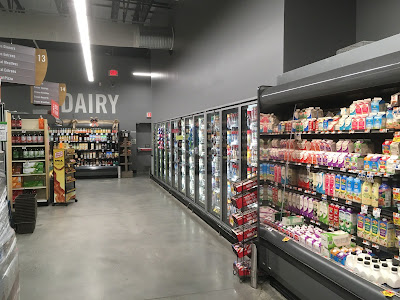 Dairy begins on the back wall and continues down the last aisle. The second to last aisle is frozen foods, which appears to have different category markers. 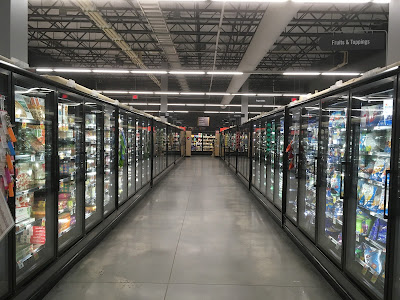 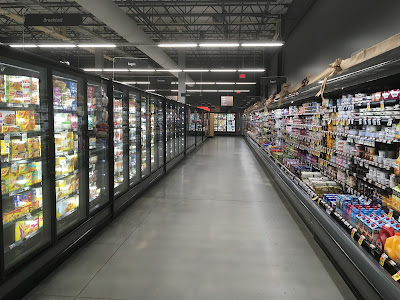 Now for a quick look at the front end before we head out... 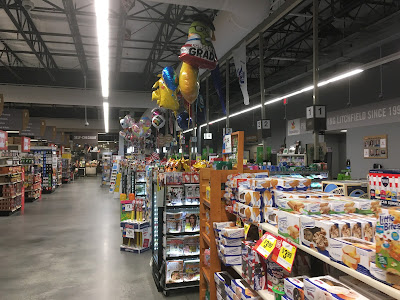 If I remember correctly, this corner had a small liquor department. This store does not have a pharmacy. 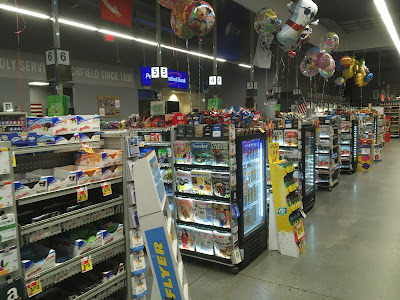 While this store is certainly very nice, and it somehow feels upscale in person, there are certain decor choices that just make me scratch my head. I am glad that Stop & Shop has moved on from this decor package, for sure!