Well. Today's post was supposed to be a Snapshot at the Bristol Selecto Supermarket in Bristol, PA, but I don't believe I saved the photos when I removed them from Flickr. It doesn't matter, they weren't very good pictures. In fact, you should still check the store out on Google Maps here, here, and here, to see a relatively intact (if horribly mutilated) A&P-turned-SuperFresh centennial model with SuperFresh decor still mostly original.

Anyway, here's some old bags from Compare Foods instead! 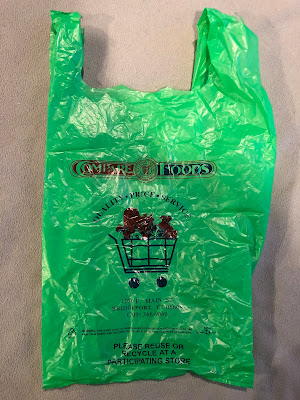 Oh yes, by the way, I've never been to either Compare Foods store in Bridgeport. This bag came from the Worcester location. All three are now Gala Foods. 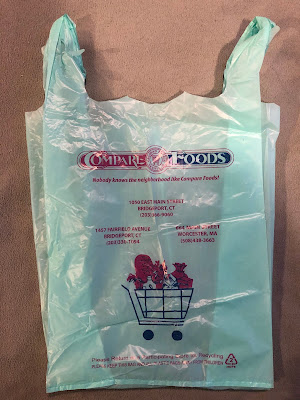 Ah, here we go. Slightly better, although I still really can't tell what most of that in the cart is. For instance, what's that big lump sticking out on the top left? "I think maybe it's supposed to be a giant, mutilated loaf of bread," said fellow supermarket blogger Retail Retell.

Anyway, the store now uses Gala Foods bags. Which makes sense. Because it's, you know, a Gala Foods. Crazy how that works.