Today's Snapshot is a store that really confuses me. Soon before my visit in June 2018, a row of small storefronts on the corner of W 183rd St and Davidson Ave (the next block east from Lindo Supermarket) was combined into one larger property, preparing to open as the Bronx Marketplace at the time of my visit.
What confuses me is this: the store appeared to be almost ready to open, fully equipped with its Bronx Marketplace sign, when I passed by. But a photo posted to Google Maps shows the store with no sign but a temporary banner. So the sign was removed before or immediately after the store opened? And a review from substantially after the store opened makes a reference to it being under "other management" -- like new management? Already, so soon after the store opened? I don't get it, but it looks like they have a nice building! 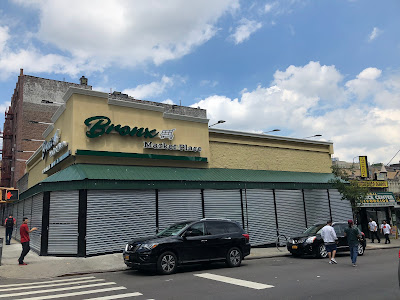 It's a pretty nice sign too, I have to wonder why it was removed. Unless, for instance, it was put up without permit approval. 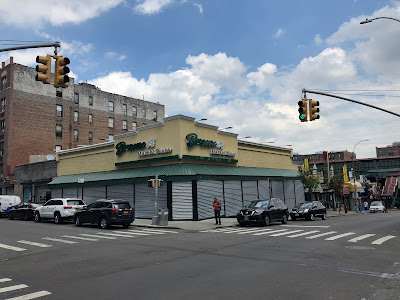 As you can see, they have a nice corner spot but it's also just a block off the main road (Jerome Ave), which has a Pioneer right under the subway station that you can see just to the right above. We're going to tour the Pioneer on Saturday. This store is located at 19 W 183rd St, Bronx, NY and I wish them luck in this very competitive market!