Acme Style has covered this location (actually just shy of a year ago), but now it's my turn. I happened to stumble across this store while on vacation in the area and had no idea that I was in ACME country. 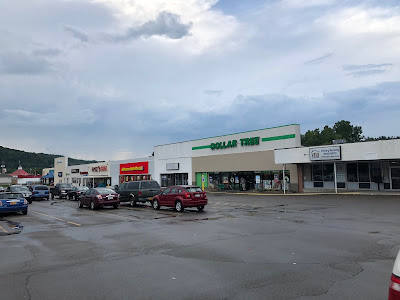 Starting off with a look at the former pitched-roof store just next to the newer location. The new facade disguises the roof, but you can see it's still there in Acme Style's post. Also, let's take a second to appreciate that this mall is home to both a Dollar Tree and a Family Dollar. The pitched-roof store likely opened in the mid- to late-1960s, with the replacement store opening around the late 1970s. 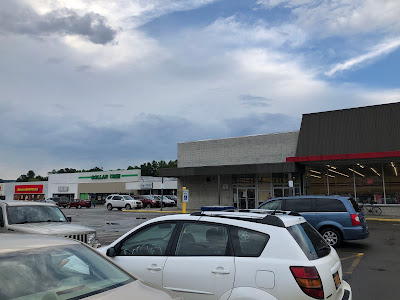 Here we can see the new store beginning in front, with the older store visible to the left. We can also see a hint of an angled roof behind the Dollar Tree facade. 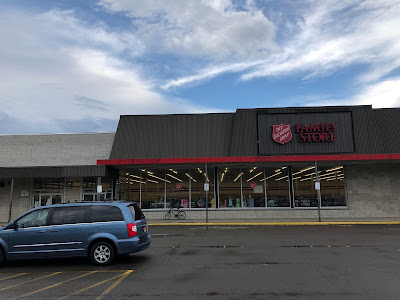 The replacement ACME probably, as Acme Style points out, closed in 1994 before a sale to Penn Traffic. (In 1979, it had been switched to the Pennsylvania division, not as strange a choice as it might seem since Bath is only 30 miles north of the Pennsylvania border.) Interestingly, by 2009, Penn Traffic was operating a P&C Foods at 400 W Morris St in Bath (just around the corner from this store at 380 W Washington St), which was sold to Tops Friendly Markets in 2010 before being sold once again to a Save-A-Lot owner in 2012. The Eckerd next door became a new Save-A-Lot and a Tractor Supply Co moved into the former P&C. By 2009, this former ACME was open and running as a Salvation Army. It seems that the 400 W Morris location would logically have been a replacement for this location, as it looks slightly larger. However, it's clear from the photo that that's a pretty old building, so either (a) it was something prior to P&C, or (b) it was a replacement almost immediately after they took over the former ACME. Anyway, let's focus on the ACME here! 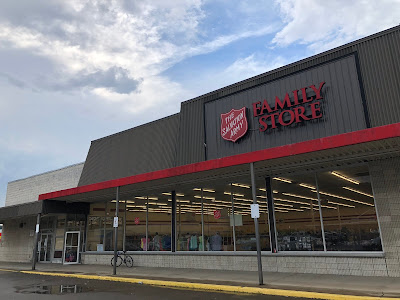 The exterior is virtually unchanged since ACME was here. 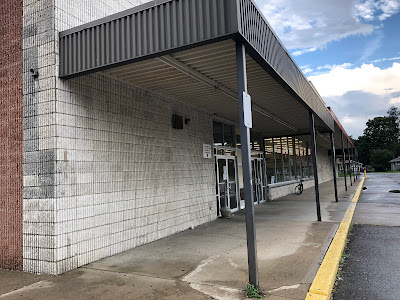 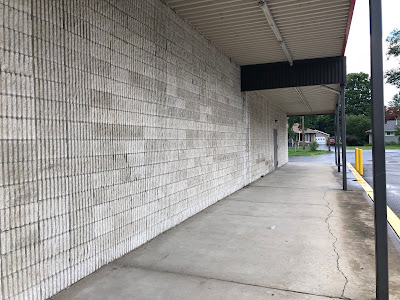 Down at the far end of the store. Bread/bakery receiving door is visible to the left. 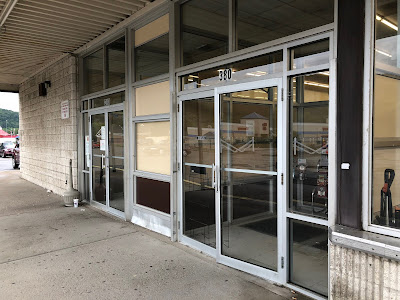 Salvation Army probably replaced ACME's automatic doors with standard pull doors when they moved in. As Acme Style notes, the panel in the center would have shown that week's advertisement. Entrance on the left, exit on the right. Let's head in. 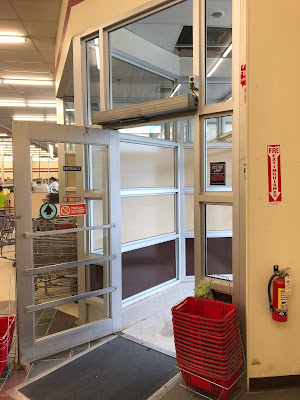 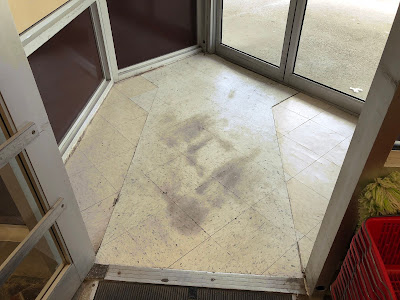 Here we can see evidence of the so-called "magic carpets" which, when stepped on, would open the automatic door. 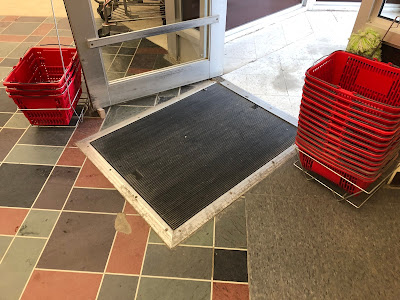 Magic carpet still intact inside the store. And yes, that's the original ACME produce flooring! But before we take a closer look at the flooring, there's plenty to see around the entrance... 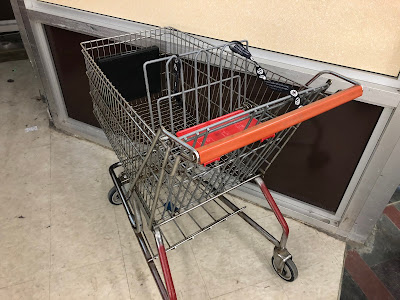 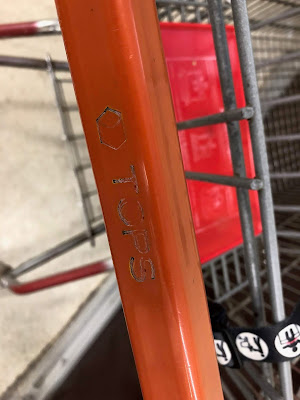 There's a Tops just a few blocks away, although that store is much newer than this cart, I would think. 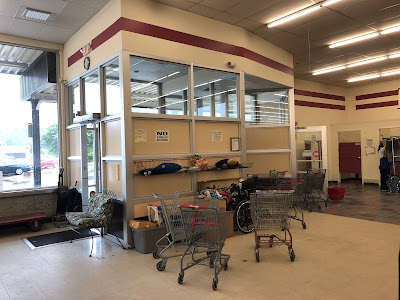 Magic carpet still present on the exit door. This area is very much original. Taking a closer look at the walls around the doors... 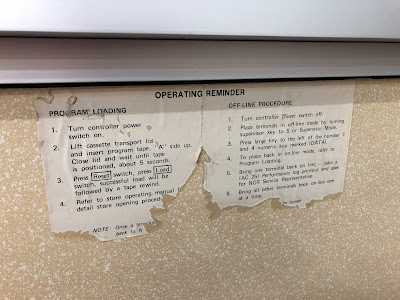 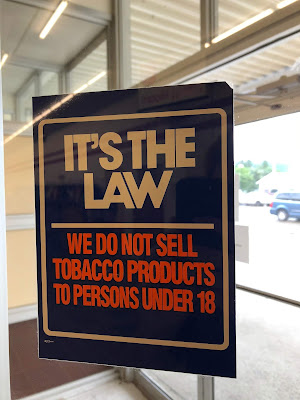 And, well, Salvation Army doesn't really sell tobacco products to anyone. So this sticker on the entrance door is also clearly an ACME relic (or, I suppose, from one of the later occupants). 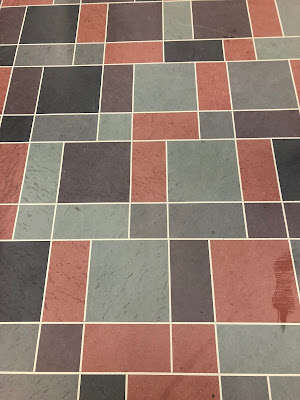 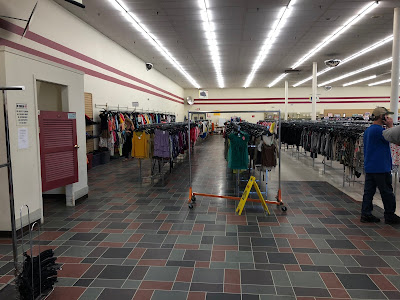 It's not hard to picture this as a supermarket. Produce would have lined the left-side wall here. 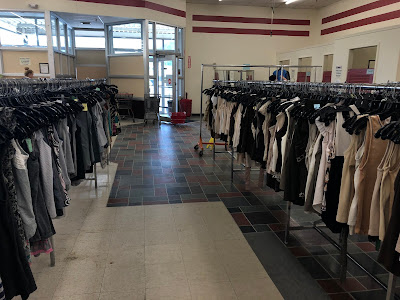 As Acme Style points out, you can see a gray stripe on the floor where produce cases were probably removed. 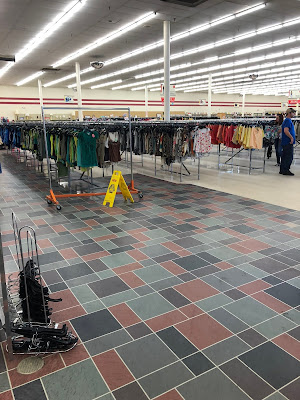 More produce cases would have filled this space before the aisles. 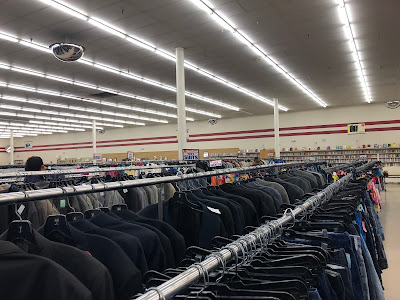 Acme Style points out that the back wall was probably added later, most likely by Salvation Army, to expand the backroom space. The sales floor is quite large, so they probably thought they had room to play with. 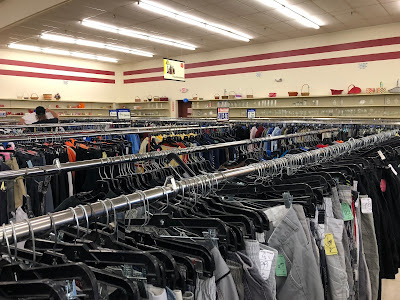 Front corner where the bakery would have been. The bakery flooring is intact... 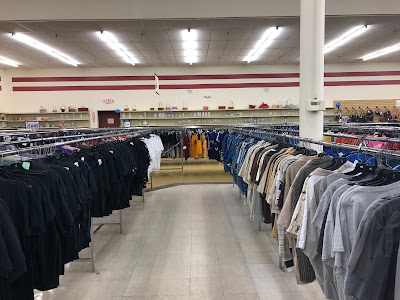 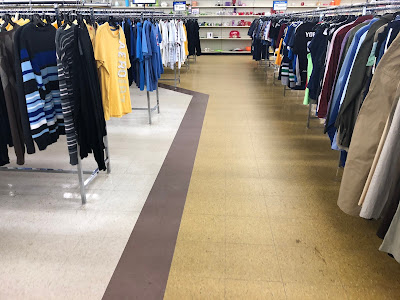 Front wall to the right in the above picture. Clearly there was no in-store bakery, or the floor would not be in such good condition. 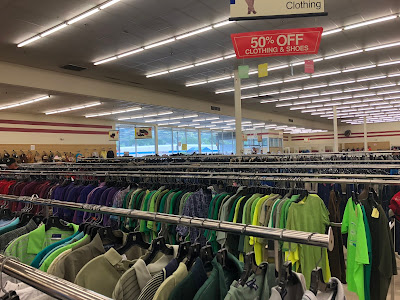 Looking over towards where the checkouts are. 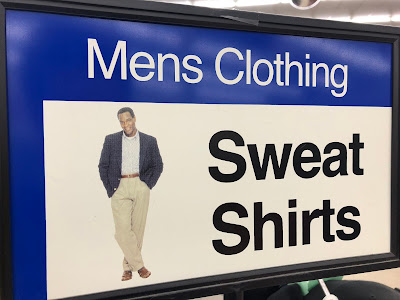 This sign made me laugh. That's one formal sweat shirt! (This, by the way, is a sign from Salvation Army corporate, as I recently saw it in my local SA store in Worcester, MA. This generic photo appears on all the category signs, regardless of what they say. There's a comparable generic photo of a woman for the women's clothing.) It also avoids the apostrophe placement in "men's," which is frequently misspelled as "mens'," by dropping it altogether! 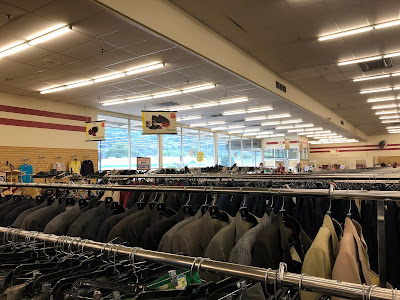 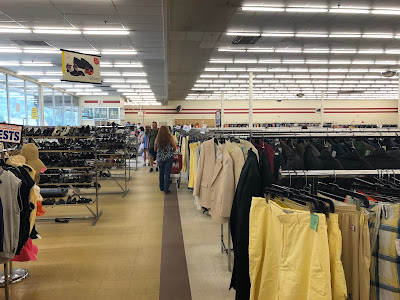 Bakery flooring continues along the front of the store partway across the front-end. The registers would have begun where the yellow floor ends (zoom in to see it more clearly).

Tomorrow we have a similarly exciting former ACME, also in the Finger Lakes Region of New York. You won't believe it 'til you've seen it!